This is somewhat of a loaded question, no pun intended! The talk about these cartridges on forums, social media and at the range has gotten a bit on the ridiculous side. Some of the statements are downright false like, “That the Creedmoor has the best long-range ballistics ever.” “That .26 Nosler is going to burn out that barrel in less than a season." Between burning thousands of rounds a year at the range and fielding an equal amount of emails from various outdoor enthusiast, I felt the need to share some real-world testing data of these two cartridges to set the record straight.

This isn’t really a comparison of two different .264 caliber cartridges because that would be a lot like putting a grizzly bear in the ring with a rabbit. It’s just not a fair fight. That being said, there is definitely a place for each of these cartridges. We are going to share some field data as well as four years of history with these two cartridges. 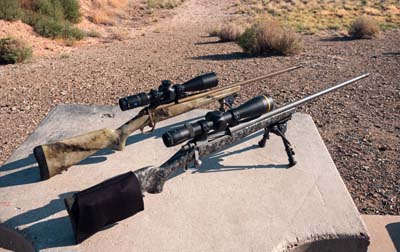 Using premium ammunition is essential whenever you are testing or comparing loads. Both of the rifles used here have been in service with us for several years and shoot the 127-grain Barnes LRX the best and accomplish sub-MOA groups from 100 yards out past 1,000 yards. The 6.5 Creedmoor load is coming out of the 26” Browning X-Bolt barrel at 2,950 feet per second which is quite a bit faster than most factory loads. The .26 Nosler is pushing the same bullet out of my custom rifle on a Remington 700 action with a 26” Lilga barrel at 3,650 feet per second. Both rifles are zeroed at 200-yard zero. 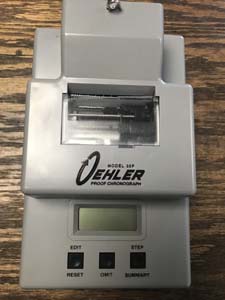 With today’s rangefinders and the ballistics technology, both of these cartridges can be deadly accurate. I’ll let each reader determine what they feel is ethical for a hunting situation. A precise shot that goes right where it is supposed to be placed can be deadly at a thousand yards with either of these setups. However, the shot that doesn’t hit its mark is the problem. Judging wind for one of those long-range shots is truly an art and even for someone that does it all the time, is often wrong. According to several ballistics applications, a ten mile-per-hour, full-value wind is going to drift that 6.5 Creedmoor round 15.7” at 500 yards. If you missed your wind estimation by 5 MPH one way or the other, it could mean the difference in a fatally hit animal or a wounded one. At 800 yards with the same ten mile-per-hour wind, you are going to have four feet (48.8”) of drift. The .26 Nosler is significantly faster and bucks the wind a lot better. At 500 yards, that same 10 MPH wind is going to drift you right at 11 inches and at 800 yards you will have 32.8” of drift.

These baselines on wind drift are established with apps like Strelok Pro, but the real-world testing has shown the .26 Nosler to be even less drift than posted.

Overall, I’m not going to tell anyone which one of these rifles and cartridges to purchase. I own a couple of each. The 6.5 Creedmoor is extremely inexpensive to shoot and has almost no recoil. I feel that it is a great rifle for kids, women and people looking to shoot animals inside of 400 yards. I don’t consider it a viable long-range hunting caliber out past that range strictly because of the wind drift issue and the lack of energy if you make a bad shot. With its lack of recoil, it is definitely a rifle and cartridge that many people are going to be able to shoot well and a well-placed shot is essential for making quick and humane kills.

The .26 Nosler has been my go-to round for the past four years and I’m north of over 1,000 rounds out of this rifle and my barrel is still going strong. My good friend and long-range shooting buddy has probably shot over 2,000 rounds through his identical rifle, which was built at the same time, but is now starting to see signs of wear. The rifle still shoots sub-MOA groups but has now gone from 15 minutes of elevation adjustment at 1,000 yards to 16 minutes, which means the barrel will need to be replaced in the near future.

I’ve taken bison, moose, brown bears, black bears, numerous elk and more deer than I can count with this caliber over the past four years. Most shots were right where I wanted, but a few didn’t hit their mark because of the wind. However, all animals were recovered quickly. “Speed Kills” is the motto when shooting the .26 Nosler and it has performed very well during this timeframe. The major downfall of this cartridge is finding available ammunition. When you do find it, it is going to cost you about $4.00 per round, which makes it hard to justify plinking. Even if you are a hand-loader, components for this are often hard to find.

The ultimate answer to the original question is – both the 6.5 Creedmoor and the .26 Nosler are good calibers. Each has a purpose, but they shouldn’t be compared, even though they shoot the exact same projectile. 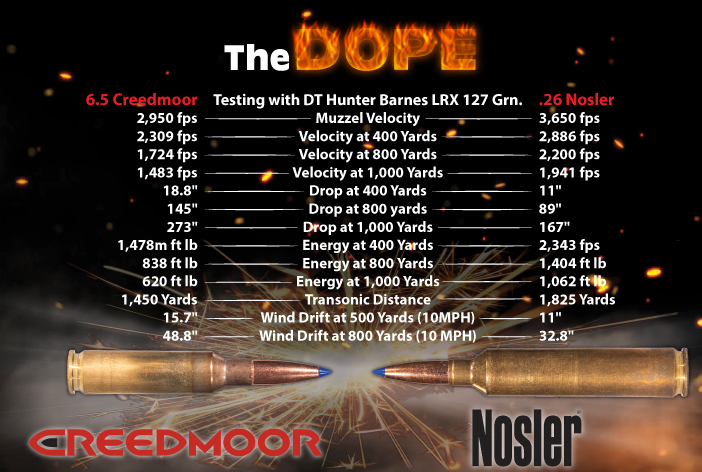