Recently I was cruising around a website of cheap Chinese junk, looking for cool new gadgets to feature in my speaking circuit as the Gear Guru. While scrolling, I came across an offer that caused me to pause in my tracks. An authentic, branded optic for a mere $29. Knowing that this red dot retails for just under a grand, it made me read deeper. The description said it was made in America, referenced the Leupold name multiple times and the image was clearly an LCO.

Now, my momma didn’t raise a dummy, that happened years later, so I knew that it had to be a fake, but yet here it was blatantly in my face. The part of me that longs for honesty and fairness in the world couldn’t believe that anyone could get away with such a blatant forgery. The part of me that knows better seized the moment and thought it would be a good opportunity to warn our readers about the potential for fraud in the gear marketplace. So, I whipped out the American Express and bought the knockoff LCO and a Trijicon RMR for good measure. What the heck, I am expensing it to Sportsman’s News, so what harm could it do? 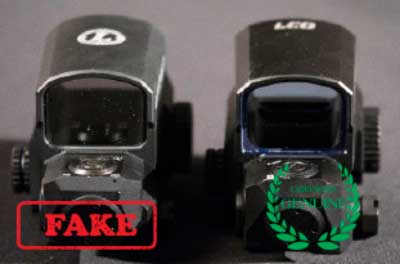 First off, if it seems too good to be true, you can be sure that it is. Though the fake LCO claims to be made in America and even has a laser engraved decal of an American flag inside a circle of text that proudly proclaims, “Designed, Machined, Assembled in the USA,” it shipped China Post from the Hubei Province of China. Two weeks later, it was in hand and my jaw dropped even harder when I saw the Leupold logo brazenly etched on top and on the sides. The weight, form factor and attention to detail of the forgery is impressive. Showing them to people in the industry, side-by-side and asking them to identify the fake, they showed some hesitation, but ultimately were able to pick the correct one. If they were shown just the fake and told it was real, they never knew the difference. 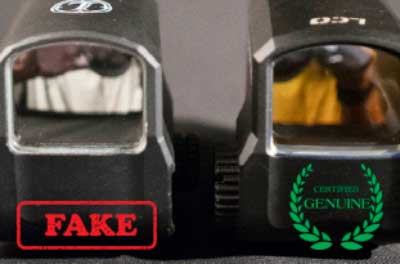 Internally though, is where the value proposition becomes crystal clear. The fake, while it features both red and green dots, is not made to any quality control specifications. The dot is fuzzy and lacks clarity. While the real LCO has Leupold’s world famous glass and amazing light enhancing coatings to improve optical clarity, the knockoff is made of a glass that adds a grayish hue to everything and lacks the crispness of the real McCoy, kind of like looking through a muddy windshield. From the outside looking in, the real LCO has a nice golden hue to the front lens and more angle to divert glare. The fake has a cheap looking, silver mirrored coating, reminiscent of Sylvester Stallone’s Ray Bans in the 1980's action film, Cobra. The angle is almost completely perpendicular, so it acts as a big reflector on top of the rifle. 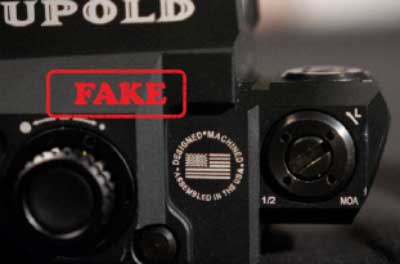 The real LCO has a subtle bronze laser engraving of the logo, serial number and other markings. The fake is bright silver engraving, to put the same information on the anodized aluminum housing. Other than some different markings and different location of them, which I will list out to help you spot the fake, the logo, text and reference printing is bright silver, almost white and not as deep as on the real one and looks like white paint.

Now, some of you reading this right now are asking, “so what? What difference does it make if it does the job of putting a red dot where I need it?” Well, it doesn’t even do that all that well. The Leupold LCO boasts an impressive 60 MOA of adjustment and tracks perfectly. This means if I dial it up 40 MOA (80 clicks) and then back down 40 MOA, the point of aim will be precisely where it was prior. The cheap knock off has 95 MOA of adjustment, but very light clicks of the adjustment screw and they are barely perceptible. It also doesn’t track well, being off by as much as a few MOA. This means you can use them to zero at a fixed distance but can’t rely on them for computing on the fly.

When mounted on a flat top AR, the real LCO had plenty of vertical adjustment for zero on the target to precision accuracy at 50 feet, making a nice tight, clover shaped group of overlapping shots. The fake didn’t have enough upward adjustment and topped out about six inches below the target. It might make it if it were mounted on a carry handle AR, but definitely not even close on a flat top. 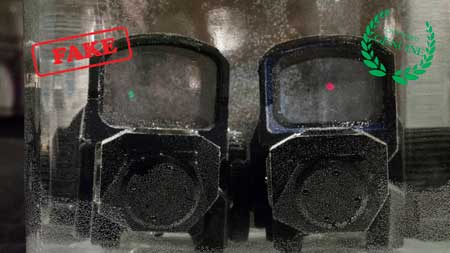 Water testing - submerging them for 24 hours really showed the strengths and weaknesses. The fake stayed running but rusted in places and it fried the power switch and brightness control. There was no damage to the real LCO.

I submerged both the real and the fake side-by-side in a glass tank for 24 hours. Amazingly, they both worked as well as they did beforehand, but the fake rusted on the top adjustment screw. Because the real LCO goes into a sleep mode and reactivates when moved, its battery was still going strong after two weeks of being left on. The fake was dead as a doornail. The real LCO has special coatings on the lenses to repel water and grime and they were crystal clear after their bath, while the fake showed significant water spotting that even further degraded its clarity. The water also damaged the brightness switch on the fake, so much that it only increases in brightness and won’t decrease until you cycle all the way around again. It also fried the power switch, so it will no longer turn off.

And here is the major difference between the fake and the real thing. Leupold has one of the best warranties in the industry, with a no questions asked lifetime guarantee on their optics and two-years on their electronics. You can count on the folks in Beaverton, Oregon to stand behind their products and either replace or repair them. I am not even sure who to contact regarding repairs on my fake.

At the end of the day, while I was impressed in the performance of the fake for a $29 piece of equipment, it was far inferior to the real deal. While it is fine for $29, where the real danger becomes apparent is that I saw the fake on another website being sold for $699. While anyone seeing the $29 price tag can assume they are getting a poor quality knock off, seeing the $699 price has all of the appearance of getting the real thing at a bargain price. It is close enough to the $909 price tag of the real LCO to have the appearance of a sale price. And then there are images floating around of the fake being used to sell the real one. Even Midway USA, a very reputable company, has the fake image on their listing for the real optic.

The table below shows some key areas where they differ to help you make sure you are getting a legitimate LCO. 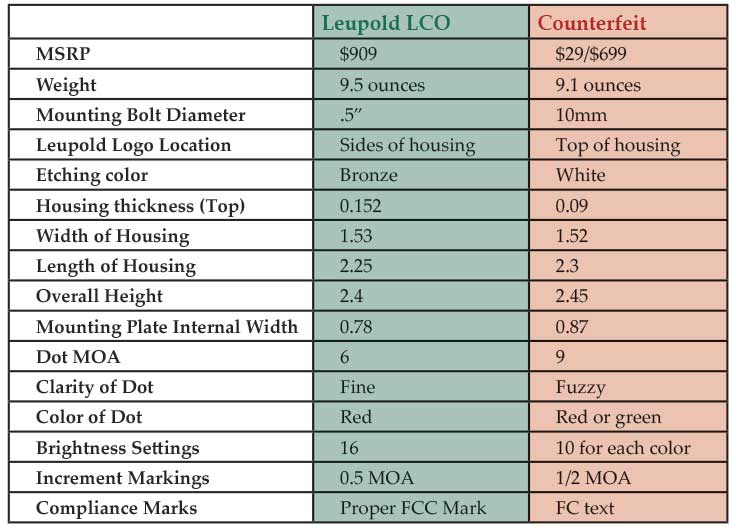 Some areas where the two differ is in the beefiness of the shroud protecting the optics and electronics. The real LCO is made of stouter stuff. The nut to tighten the mount is a heftier half inch, while the fake has a tiny 10mm that won’t allow proper torque to avoid losing zero without the risk of damaging the bolt head. All of the dials are crisp and do what they are supposed to do on the real LCO, while they may fail to make any adjustment on the knock-off. The LCO logo tops the real optic and the Leupold logo is on top of the fake.

So, how do you avoid getting ripped off? First, purchase your optic from a reputable company with a long history of standing behind their customer. Sportsman’s Warehouse purchases their optics direct from the manufacturer, so you know you are getting the real thing. Second, if you are bargain shopping and find a deal that is too good to be true, it probably is. Compare the real LCO markings and features with the item being advertised. Third, be skeptical when purchasing from third parties. Make sure they can provide the original packaging and that any images they provide are of the actual unit and not stock images.

I like saving money as well as the next guy, but if your life depends on the functionality and reliability of the true product, I certainly wouldn’t risk buying or using a fake. Now you know and knowing is half the battle.

Trijicon RMR
What about that Trijicon RMR I mentioned? Well, while Leupold was more than happy to send me one of their real LCOs for comparison, Eddie Stevenson, who handles media for Trijicon, sent me the following reply, “We unfortunately don’t have a unit to send for your evaluation. Demand for the RMR is extremely high and our T&E samples are exhausted. I would like to share the following guidelines that can help you explain what to look for when evaluating a ‘real’ vs. ‘fake’ Trijicon RMR.

On Trijicon’s website, they have a Product Authenticity link that essentially says they cannot tell you if you have a real Trijicon product unless they have it in hand at the factory. So, when it comes to the customer service of those standing behind their product, I can’t tell if the Chinese knockoff is better or worse than the real deal. At least with the Chinese counterfeit, it has done everything I asked it to and if it breaks, I am only out $29.