Fishing is a popular pastime and has seen significant growth in the last few years. With more people hitting the water and catching fish, it’s important to adhere to conservation efforts and wildlife preservation principles. One way of doing that is already pretty common and is known as “catch and release.” For those who don’t know, “catch and release” is exactly what it sounds like; after you reel in a fish, you let it go back into the water instead of keeping it. This type of fishing allows the fish population to grow, while still letting people fish as much as they’d like. While the principle is very simple, the practice requires a bit more effort and forethought. As stewards of the outdoors, it’s important to know how to properly and ethically catch and release, so I’ve written up some of my best tips and practices to help you be the best catch and release fisherman you can be.

One of the most important basic principles of catch-and-release fishing is called “selective harvest.” Basically, this means that if you are fishing for keeps, you’re careful when choosing which fish land in your boat, vs which ones land back in the water. Aside from your own personal parameters, you should also take into account the local regulations and conservation efforts. To put it simply, a rancher wouldn’t eat his prize bull, and you shouldn’t keep the prize fish. In order to keep the population healthy and thriving, there needs to be a certain number of young and healthy fish present. Check your local wildlife organizations for information on which areas are overpopulated or that stock the species that are in season. Both of these circumstances will give you better options for keeping your fish.

The next important principle is to release intelligently. Being caught is extremely stressful for a fish, so your goal is to minimize stress and risk. The number one killer of released fish is something called “delayed mortality.” It means that the fish might swim away after you release it back into the water, but that it dies shortly after due to the inability to recover from the stress, injury, and/or exhaustion. You can reduce the chances of delayed mortality by learning how to properly handle a caught fish. 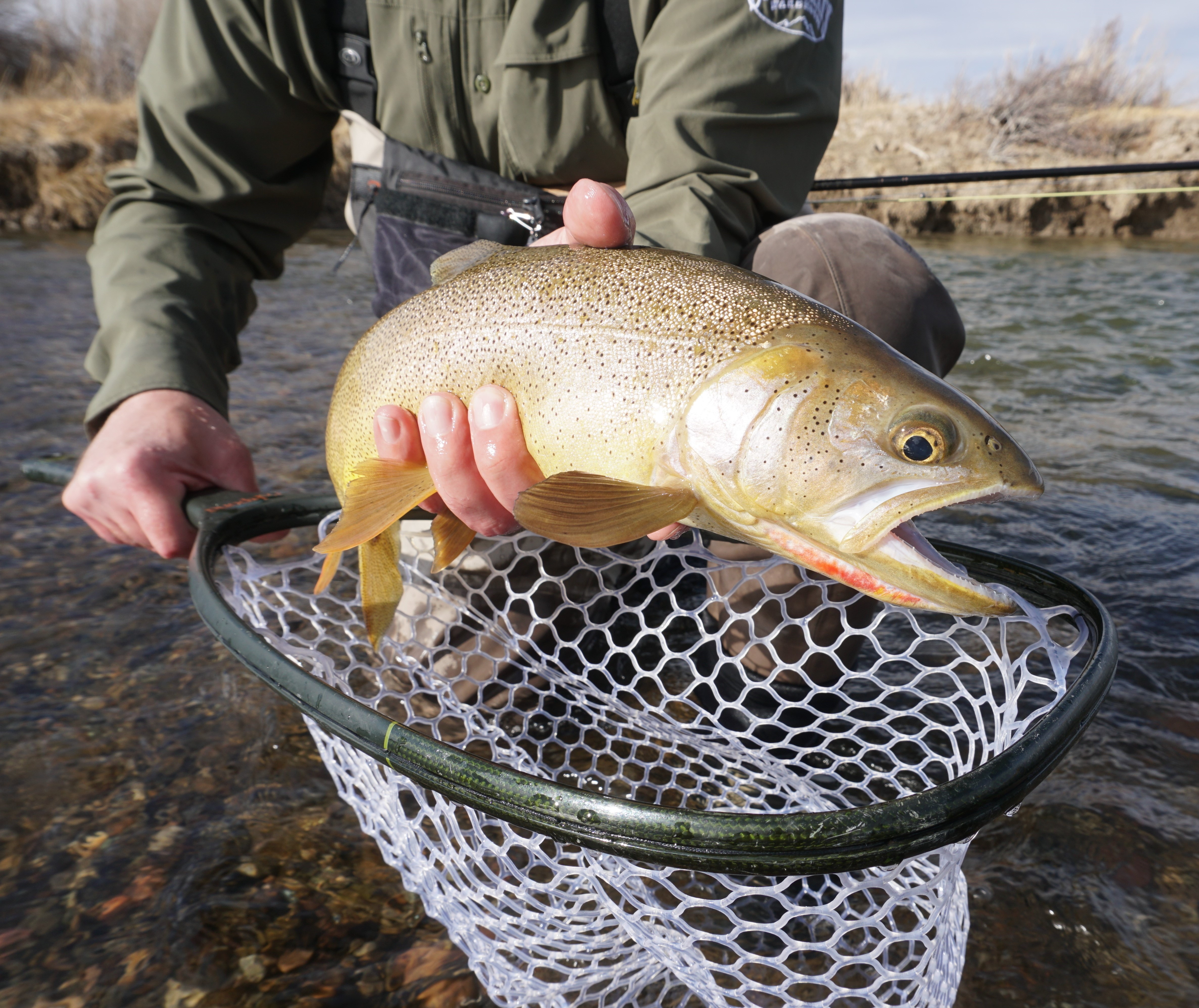 The first, and perhaps most important thing to remember is to keep the fish in water. It might sound obvious, but too often I see people holding their fish up for photos or measurements for minutes at a time, without taking into account the fish’s need for water. You have to remember that when you hook and reel a fish in, it’s fighting for its life. By the time it reaches you it’s exhausted and pumped full of lactic acid from exertion. It can’t regulate its blood chemistry or breathing correctly while you’re holding it up in the air. If you must take measurements or photos, keep the fish in the water while you get your camera and measuring tape ready. I personally use a catch-and-release specific net that’s 20” wide, so the fish can stay in the water and swim around while I get myself and my gear ready.

While minimizing the fish’s time out of water is good, you also have to balance that with time spent in the water. Gills don’t work like lungs, so you can’t have a fish in the air for two minutes, dunk it in water, immediately bring it back out, and expect it to live. A good rule of thumb is to place the fish back in the water for at least the same amount of time it was out. So if I hold a fish up for 30 seconds for a photo, I’ll put it back in the net for at least 30 more seconds before I pull it back out for anything else.

The next important thing to remember is to be very careful with what touches the fish. Fish have a protective layer on their exterior called a slime coat that protects them from bacteria. If it’s disrupted it can be fatal to the fish. Anything rough or textured can damage a slime coat including nylon nets, calloused hands, boat carpet, and gravel. As I mentioned before, I use a catch-and-release specific net when I fish; not only is it large, but it’s also rubberized, so even if the fish bumps into it, it won’t rub any of its slime off. Similarly, I never reel a fish in and drop it on the floor of my boat. In fact, in professional bass fishing competitions, landing the bass in your boat will get you disqualified. I also never reel a fish onto the beach if I’m fishing from shore. The gravel and rocks the fish will inevitably hit or land on will surely cause delayed mortality, and that’s never what I want.

Another important aspect of correctly handling fish is choosing the right tackle. I know there are certain bragging rights attached to reeling in a fish on super fine lines and light tackle, but it isn’t good for the fish. The more you wear the fish out, the less likely it is to recover when you release it. If you use stronger lines and hardier tackle, you can cut down on the time it takes to reel your fish in, and hopefully, give it a better chance at life afterward. You also have to choose the right hook for releasing. There are a few ways to do this but circle hooks, semicircle hooks, or crimped hooks are a good way to go since they’re easier on the fish. You might lose a few fish, but better than killing every fish you catch. If you do use a lure or crankbait it might be harder to remove. If you can’t pull it out, you should try to cut it out. Keep in mind that a fish can survive a hook in the lip easier than it can recover from overhandling. If you accidentally gut hook a fish, just cut the line as close as you can instead of manhandling the fish for minutes, trying to get it out. Before you go out and buy hooks, make sure you check with your local wildlife managing entity. Some states or locations have hook regulations, so make yourself aware of them.

Fishing is a death sport, but it’s important to try to minimize accidental fish deaths if at all possible. I think the biggest problem when it comes to fish mortality is that people are simply unaware of how fragile a fish can be, or how quickly it can die, even if it “swims off strong.” So my goal, as a conservation angler is to teach people how to release responsibly. The topics I covered in this article should give you a great place to start, but if you’d like to learn more about catch and release, or fishing techniques in general, visit your local Sportsman’s Warehouse, or get in touch with an expert at Sportsmans.com.