Leading and Growing the Sport of Shooting

It’s not easy being one of the best shooters in the world, but having grown up around guns her entire life, the lifestyle is natural for Lena Miculek. The daughter of two championship shooters, and raised on a range, it’s not surprising that Miculek took to the sport, and quickly rose through the ranks.

Miculek started shooting competitively when she was just eight years old, with a .22 pistol and rifle. Since going pro in 2012, she has set two NRA World Records, and won eight World Titles in five different shooting disciplines. Although proficient in many types of firearms and calibers, this year she has decided to focus solely on PCC (pistol caliber carbine). During our interview, Miculek affectionately referred to herself as a “handy woman,” because she’s proficient in and has competed “in everything, with everything” when it comes to shooting. Her new focus now though is to dominate in the PCC division with her Sig Sauer MPX. 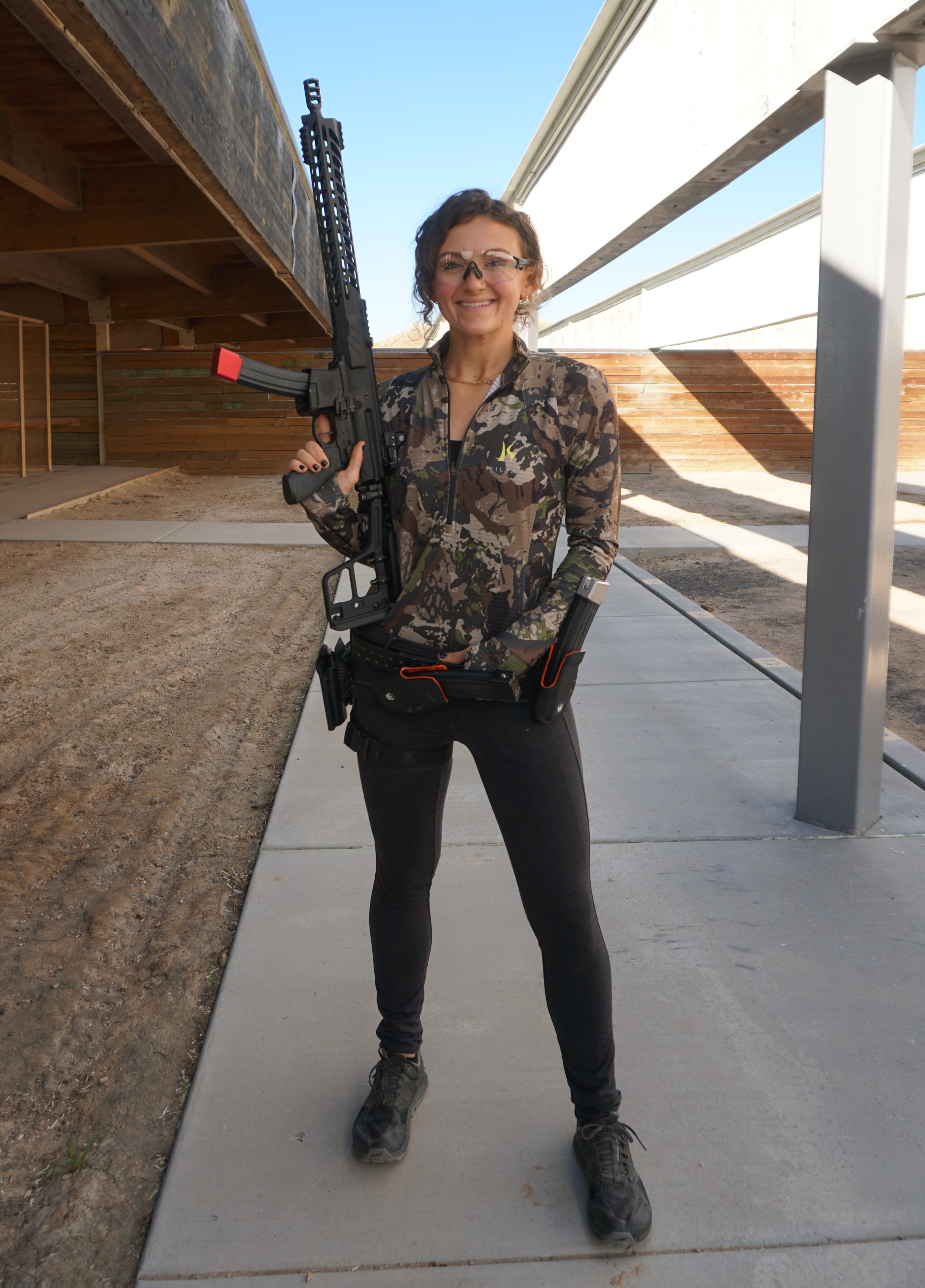 Along with her usual drills, workouts, and mental exercises, as a part of her training for this season Miculek also started practicing Brazilian Jiu Jitsu. As she explained to me, a big part of being successful in the competitive shooting world is having a strong mental game.

“Being strong and athletic is helpful for everything in life, but being able to access complete focus and intensity is what got me as far as I have… I need(ed) to learn how to give everything I have in the flip of a switch. How to channel all of my intensity in a moment.” said Miculek.

So she decided to learn the oldest competition known to man, as she put it, “one person fighting another person.” Practicing fighting and defensive maneuvers in Jiu Jitsu helps her focus all her energy and channel it into a single moment in an instant. This mental exercise trains her brain to be faster, more observant, and builds the mental muscle memory that is so crucial in competition or combat. Muscle memory is important, but you want your brain to be in the zone as well. Repetitive training will help get you there. That’s why Miculek recommends beginner shooters just get out on the range. It’s definitely nerve-wracking being out there the first few times, especially for competitions because everyone is watching, but Miculek advises you to “Get over yourself and block everybody out and do what you do.” The only way you’re going to get better is to start practicing, both physically and mentally.

Another piece of advice Miculek has for beginners is to have a plan or a goal in mind when you go to the range. If you’re not specific with your practice, you’ll end up with poor results. Think of it as going to the gym. If your only plan is to “get fit,” you’re probably going to spend more time meandering around on the machines than you are actually going to make progress. However, if your goal is to improve your hamstring flexibility, or bicep strength, then you’ll probably already know what machines and exercises you’ll need to be using. The same goes for shooting. Go to the range with specific goals and exercises, so you can make the most of your time and practice.

Miculek’s current training goal is to become faster and more accurate with moving targets. She explained to me that she’s focusing on her moving target technique right now because it’s the drill she hates the most. Her philosophy when it comes to training is, “Always go and do what you hate the most, if you don’t like it, it's because you’re not good at it.” Eventually moving targets won’t be what she hates the most, and she’ll move on to other drills. Until then, her repetitions and dedication will help her fortify her weak spots and build her proficiency.

When comparing oneself to someone who has accomplished so much in the sport, like Miculek, it can sometimes be intimidating for beginners to get started in competitive shooting. However, Miculek says that the people and the sport as a whole is very welcoming. Everyone who attends and participates in shooting events is a firearm enthusiast, and they are always eager to share their knowledge and passion with beginners. As Miculek told me, “I wish it was more popular and well known, just because I love it, and want more people to do it.” So if you’re nervous about starting out, don’t be! The best way to get started is to find your local club at USPSA.org, and go to a match. Engage with the shooters and spectators, and if you have any questions you can always visit your local Sportsman’s Warehouse, or DM Miculek on Instagram @lena_miculek.