Looking Back on the Hunt of a Lifetime

The story behind the 2020 Elk Hunt of a Lifetime winner's hunt.

Every elk hunter dreams of drawing a tag, going on an amazing trip, and taking down a trophy worthy kill. For Matthew Wood, our 2020 sweepstakes winner of the Elk Hunt of a Lifetime, this was even more of a dream come true when he won his tag and this trip. Wood originally put in for an elk tag in Utah, and a deer tag in Wyoming. As fate would have it, he didn’t draw his elk tag. However, he happened to see a pop-up for the Elk Hunt Sweepstakes while shopping for a backpack on sportsmans.com, for his Wyoming deer hunt. As Wood put it, “Usually I just close those out, but I figured, why not, I’d throw my hat in the ring.” So you can imagine his surprise when he was notified that he, out of thousands of entries, was the winner of the Elk Hunt of a Lifetime.

After Wood got over the shock and surprise of winning, he started preparing for the hunt. This trip would be particularly meaningful, because although he had been hunting for most of his life, he’d never been able to go on a guided one before. Even better, this hunt would be taking place on property that was only an hour from where he grew up. He had heard plenty of wonderful things about it, but never figured he would have the opportunity to actually hunt there.

As unexpected as winning the sweepstakes was, the hunt itself was even more so. The second night of the trip delivered an early snowstorm, torrential winds, and a temperature drop of almost 60 degrees. Due to the storm, many of the roads were blocked the next morning with downed trees, so the group had to take a different route than originally planned. Unsurprisingly, Wood and his guide came back from spotting the following morning empty-handed. When the cloud cover finally broke that afternoon however, they decided to venture out again. Despite not having high expectations for the day, they managed to glass a couple of herds and bulls. However, none that were exactly what they were looking for. So they carried on to the canyon they had visited on the first evening, hoping to find better prospects.

Down in the canyon they spotted a herd of more than 75 elk. The first two bulls with the herd were good, but according to Wood, “not what we wanted so early in the hunt.” Hoping another bull would come along, they stayed and watched. Finally, another bull walked out of the tree cover and Wood got his first look at his prize elk. As Wood described it, “The bull finally appeared, following the cows, giving us a quick glimpse of him, and as he disappeared, my guide and I both looked at each other and both agreed he deserved a closer look.”

Grabbing their gear, Wood and his guide made their way down the canyon in pursuit of the prize bull. On the way down a younger bull spotted them and began tearing up the ground and bugling. Wood was worried the younger bull would scare off the one they were after, but luckily he turned and went the other way. 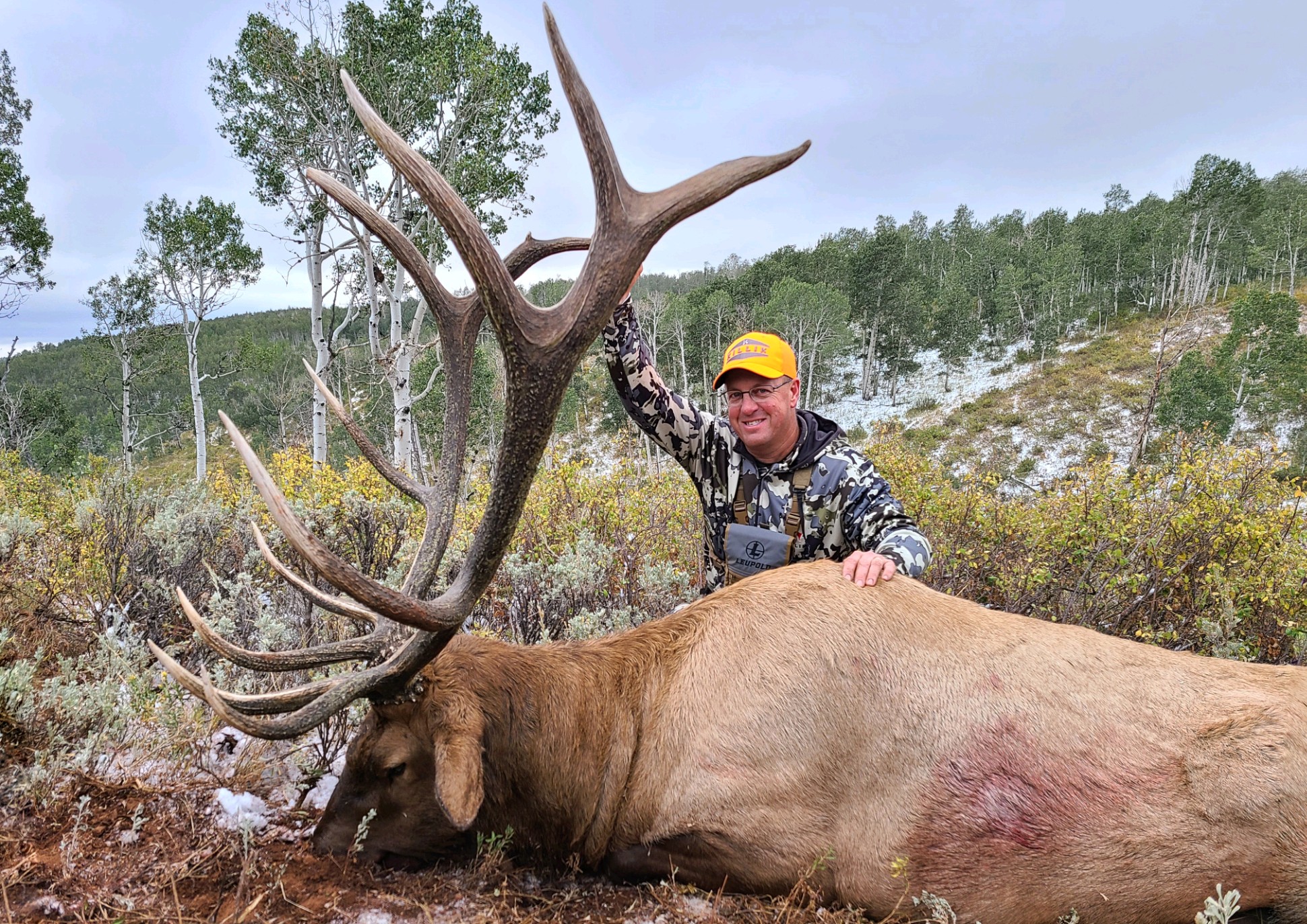 As they got further down into the canyon, the target bull reappeared and Wood and his guide decided he was the one. Wood set up his gear as the bull followed a cow out of sight. Then, in Wood's own words, “We could see the bull’s antlers over the brush heading back up to his other cows. When he got in my shooting lane, my guide let out a cow call, stopping him. He turned slightly and let out a bugle and I fired. A couple minutes later I had my hands on the biggest bull of my life.”

As a lifelong hunter, this trip was extremely rewarding for Wood as he was not only able to take down a trophy sized bull, and receive lots of new quality gear, but also because it gave him wonderful memories and new experiences. Wood remarked that afterwards that he was most excited to be able to share the footage of the hunt, meat, and mount with his friends and family, as this truly was the hunt of a lifetime.

If you would like to go on a memorable elk hunt of your own, keep an eye out for the next Sportsman's Warehouse Elk Hunt sweepstakes this spring!