Story and Photos by Gary Lewis

A general named Crook with a weakness for bird hunting, found himself, after campaigns across the west, back in Arizona, his quarry, an Apache named Geronimo.

One of Crook’s key strategies was the use of selected Indian scouts to guide each column of soldiers. The scouts were kept one to two day’s march ahead of the army and up to fifty miles along each flank.

On May 20, 1883, Crook took his shotgun and wandered alone into the tall yellow grass. Distracted by the good hunting, he was an easy target for the Apaches. They surrounded him then seized his gun and his birds.

Some historians claim that this was all part of Crook’s brilliant plan, a daring risk to bring the Apaches to a place where peace could be negotiated. Others posit that Crook was simply following his compulsion to hunt when he was captured.

Regardless, Crook’s strategy of dogged pursuit and the tenacity of the Apache scouts had been so effective that the renegades surrendered. 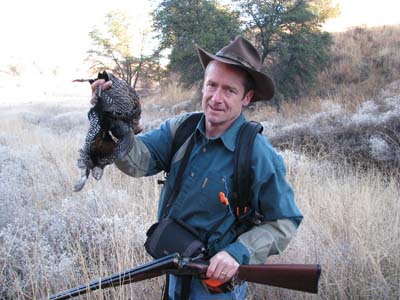 Anyone that has hunted quail in Arizona knows how easy it is to forget everything except the next covey flush. We followed our compulsion to hunt and found ourselves in Arizona at the end of November.

Drops of dew clung to the tops of the yellowed chest-high grass and glistened on the cholla and the prickly pear.

“Lady, whoa.” The German shorthair keened and quivered. She looked at each of us in turn to make sure we were ready.

Bob and I had our guns loaded. Bill Valentine thumbed three rounds of No. 8's into his Browning. My dad broke his borrowed over/under and dropped two loads into the chambers. Clunk-clunk.

“This early in the season, the birds are out in the tall grass in the flats. Later in the day, we’ll find them up in the brush,” Mulligan said.

Lady cut back and forth, sometimes bouncing up on her back legs to catch a glimpse of her master. Then, at the mouth of a canyon, her head lifted and she sorted out scents borne on tendrils of wind.

I stayed low, while Bill took a deer trail below the crest. Dad and Bob stayed close to Lady in the high grass. She stiffened, locked up and a bird launched into the air, followed by another and another. At once, in a blur of wings and sound, almost a dozen quail were aloft.

Dad’s shotgun thumped and one bird crumpled. One came my way and flashed by, headed uphill. I swung my side-by-side, squeezed and watched the quail fall and roll. Bob knocked another down as it crested the opposite ridge.

One of the singles touched down next to Bill and he walked right into it, flushed and connected before the bird could put an oak tree between them. Ten minutes into our hunt, we had each bagged a Mearns’ quail from the first covey rise. 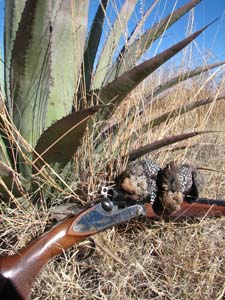 Bob carried Dad’s bird down and handed it to him. Every bird is special, but this was Dad’s first Mearns’ quail and only the second bird he had taken after a hiatus of 31 years. For reasons I cannot fathom, my dad quit hunting when I was young. Now that he was back in the field, his eyes twinkled with delight.

For a moment, Mearns’ quail seemed almost too easy. Then Lady shouldered into the cholla and catclaw on the next point. She went rigid in the bottom of the draw and eight blurred quail broke away. Two quick shots. One bird folded going around an oak tree. I finished the two-hour morning hunt with four polka-dotted quail and a mourning dove.

South of Tucson, harsh mountains rise steep out of the arid desert plane. The Huachucas, Santa Ritas, Sierritas and other high desert ranges of the Coronado National Forest are home to Mearns’ quail, a long-toed scratcher of the tall grass, scrub oak and cactus uplands.

Mearns’ quail have black and white heads which almost seem too big for their bodies, capped with a rusty crest. On the male, the brown and black checkered backs and flanks are spotted with white darts. Breasts are mahogany colored, blending to black at the rump, with a stubby tail. The female is cinnamon colored with brown, black and tan. 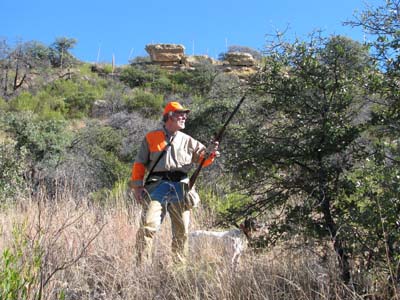 Once thought to be extinct, Mearns’ are found in huntable numbers in wide flats with thick grass as high as a man’s belt buckle. For the birds to thrive in spite of bobcats, coyotes, hawks, and long, hot months without rain, they require tall, thick grass, loose soil and overstory, qualities found in highest proportions when the land is grazed lightly.

50- to 75-percent of the Mearns’ quail diet comes from wood sorrel and nut grass. Seeds, insects, and acorns make up the remainder of their grocery intake.

Much of what they eat is found inside the drip lines of the oaks.

Mearns’ quail seldom travel more than 45 yards from the overhanging protection of trees. Tall grass is their best defense and the grass grows only when the summer rains fall. Their food may be found in abundance, but it is inaccessible to them if they have to travel out in the open, exposed to hawks and other predators.

Rain is the key to desert birds. Mearns’ quail want their rain in the summer. Some years the rains come, other years are dry.

Look at July, August, and September rainfall. If there is good rainfall in a specific area, that can be a clue to better hunting.

Arizona’s Mearns’ season begins in November. Most hunters limit their kill rather than kill their limit. The average take runs between 1.1 birds and 3.1 birds per hunter.

Look for broken terrain, tall grass, oaks, and catclaw. Much of the best hunting is on public land, ground shared with cattle ranchers. In the field, watch for bovines. Cattle grazing promotes the growth of the grass in succeeding years, but signs of over-grazing mean that the birds have moved on to better cover.

In good years, the grass is thick, which defines the best habitat, but confers little advantage to the hunter. A close-working pointing dog gives a hunter a definite edge. If one is good, two are better, alternated so that one dog is always rested and ready. 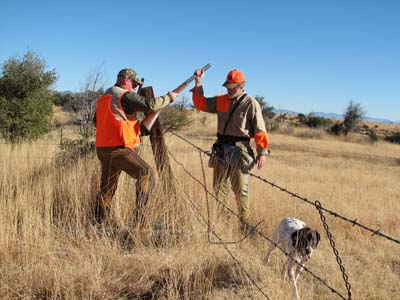 Mearns’ hold better for a gundog than any other quail, yet they fly faster, more unpredictable when flushed. At the covey break, the quail scatter and the singles hold so tight that the hunter must almost step on them to get them to flush. The dry air and grass hold very little scent to allow the dog to find them again.

On our second day we passed checkpoints and dodged Border Patrol trucks hurtling along mountain roads. Agents watched us from the high country then turned their spotting scopes away.

Miles in, we found a canyon with tall grass and good cover that sheltered not only the quail we coveted, but the quarry the men and women in the green and white trucks were hunting. We found their spoor: empty refried bean cans, water bottles, and backpacks.

On a windswept ridge, we stopped to look out over miles of manzanita, saguaro, and oak, the ground cut by dry creek beds. Apache country.

Standing there with my dad, it was easy to remember the young man who took me grouse hunting for the first time when I was only three years old. It was good to have Dad back in the field.

On day three, on the shoulder of a ridge, Lady pointed a covey just for me. I missed one as it broke toward Bill and Bob over the valley. Reloading, I missed another with both barrels.

Crashing through thigh-high catclaw, clinging to oak branches on the steep slope where the rocks rolled like marbles, it was easy to understand how a hunter could forget himself, even with hostile Apaches watching from the high places.

Lady, our scout, her legs flecked with blood, ranged ahead, still hunting as we headed back to the truck – captivated all, yea nearly captured, by Mearns’ quail. 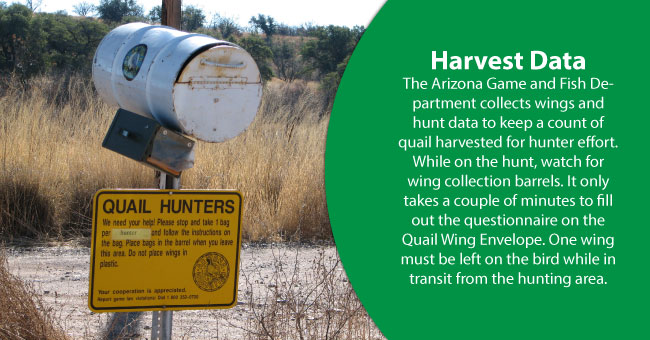