We called him Big John. He was the tall, angular architect of a bullet that revolutionized big game hunting around the world.

On a clear day in May of 2007, the founders of the Central Oregon Shooting Sports Association, and friends of John Nosler asked John to come out and inaugurate the new John Nosler 1000-yard High Power Rifle range where a small crowd had gathered.

Bill Lewis who had worked with John in the engineering department at Nosler, Inc. had a rifle in the back of his truck, a 1943 Springfield 03-A3 that he had rebarreled with a target barrel back in 1967 and fitted with a stock he had built himself. The scope was an old Mark X Leupold, fitted with a fine target crosshair, state of the art in the 1990s. Handloaded cartridges, of course, 190-grain bullets. 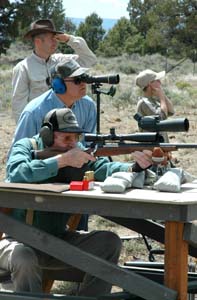 Bill Lewis had not shot that rifle at 1000-yards for years, but he had a notebook with the scope adjustments to make.

“I clicked it up to where it should have been shooting and gave John the rifle,” Bill said.

John turned to Bill for the windage. It was a calm day with just a slight breeze.

John fired a shot. A small puff of dirt drifted on the wind. John turned to Bill. “Same hold, Bill?”

John fired again. The crowd applauded politely. As if on a golf course.

The 94-year-old self-taught ballistics engineer, the innovator of the Nosler Partition, stood up and shook hands and smiled and someone wanted another picture of John at the bench.

John sat back down behind the rifle and turned to Bill.

The target was a four-by-eight sheet of plywood with a large circle scribed upon it. No one expected John to hit it.

“I didn’t think he was even going to hit it because I hadn’t shot that rifle in years,” Bill Lewis said later. 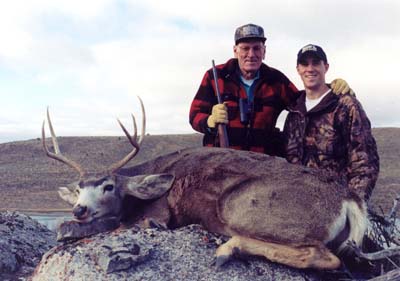 After the crowd went away, Bill Lewis drove downrange to take the plywood target down. What he found were three bullets in the plywood, inside the circle. Two of the bullets were fairly close together while a third was a bit further left. The three-shot group measured 9 inches. Nine inches. That’s less than a minute-of-angle at 1,000 yards.

When Bill told John about the target a few days later, John said that “flier” bullet was the third shot. 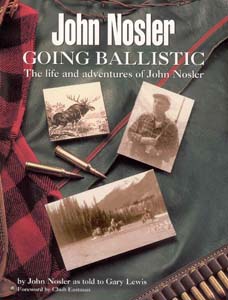 “He said that was his fault because he thought the wind had changed a little bit.”

At the age of 94, John Nosler could still outshoot just about anyone on the range. That’s what a lifetime of shooting can do for a guy.

He Built a Better Bullet

For two years, John and I worked on the story of his life and I came to know the young man that was John Nosler. To me, his was the story of America in the 1900s.

"In those days, little boys were made to wear dresses and since we had so many girls in our family, I had plenty of lace and ruffles for my first few years. When I got a little older Mom dressed me in short pants. When she gave me my first pair of long pants, I finally felt I was making some progress. "

From an early age, John Nosler showed an interest in mechanics and how things worked. He got his first car when he was eight years old and when he sold it, he began to look for a Model T Ford.

It was common to see neglected Model Ts in the backyards of ranches, so I rode around on my bicycle until I found one in the backyard of an old clapboard farmhouse. I went up to the door and asked the lady if she wanted to sell it. She said, “I don’t know. I guess we don’t have any use for it anymore.” I asked her if she could use a bicycle. She said that one of her kids needed one, so I traded my bike for the Model T and had a heck of a time bringing it home.

His dad had a pump-action BB gun and with it taught John to shoot. When John managed to save up a little money, he sent away for his first gun.

"I bought my first single-shot Stevens Favorite 22 when I was still in fifth grade. I think I paid less than $5 for it. I still remember going down to the mailbox, about a quarter of a mile from the house, and finding my new gun from Montgomery Ward waiting for me."

In 1929, the bottom fell out of the stock market and John, a 17-year-old athlete who played football, basketball, baseball and ran track, dropped out of school.

"I went to the neighborhood Ford garage in Chino and asked them if they would hire me as a clean-up boy. They said they had been looking for someone and so I got the job. I cleaned up after the mechanics and did odd jobs around the dealership, cleaning parts, floors, and cars. But I had a world of experience before that from living on the ranch and working on all the equipment we had on the farm. No one mentioned how much I would be paid. No one talked about that because just having a job was the important thing. I worked a month or two and finally the guy said 'John, we like you, so we’re going to give you 15 cents an hour.'"

A lifetime of shooting and mechanics and innovation lay ahead. When Ford Motor Company offered him the chance at a college education and a career, Nosler turned them down to get married to his sweetheart Louise. The couple moved to Oregon in 1936 to start a Ford dealership.

When the Ford dealership fell on hard times, Nosler took one truck and moved to Ashland where he started a trucking business. 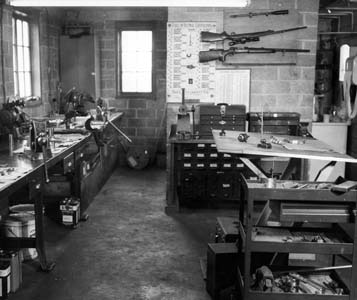 In 1941, Nosler headed north for a moose hunt in British Columbia and returned every year for almost a decade. In 1946, he carried a Winchester Model 70 300 H&H Magnum. Toward the end of the trip, he came upon a bull feeding in a patch of willows. That encounter was the turning point in his life.

Back home, he began to puzzle out how to build a better bullet. It was inside his truck shop where he turned out the first Partition projectiles in 1948.

John was the only person in the whole world that believed in his concept enough to build it. He was fascinated with the idea and the more he researched, the more it looked like manufacturing the bullet might be profitable. A good mechanic and machinist, he knew he wasn’t an engineer. But the engineers he had met didn’t know anything about bullets. 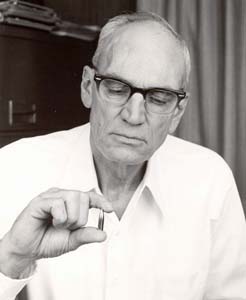 John thought he knew something about bullets and he figured he could learn engineering and manufacturing. What followed were months of design, construction, trial and error and studying engineering texts late into the night. There were no machines to make a bullet like this. When he needed a piece of equipment, he had to design and build it himself.

When he finally had a few projectiles in production, John began sending them out to see what the gun writers thought of them.

Warren Page, Jack O’Connor and Elmer Keith sampled some of those early bullets. Page and O’Connor, in particular were big boosters. Keith was very interested and the two hunters became good friends over the next few years.

John was doing what he set out to do and soon the Nosler Partition Bullet Company was hard-pressed to keep up with demand. He had proved the Partition was needed and that it could be built and that hunters would buy it.

On the other side of the Cascades, Bend’s Industrial Committee in the small town of Bend, Oregon, was looking for businesses to fill the void left by the fading lumber industry. They heard about the upstart company and called John to arrange a meeting. 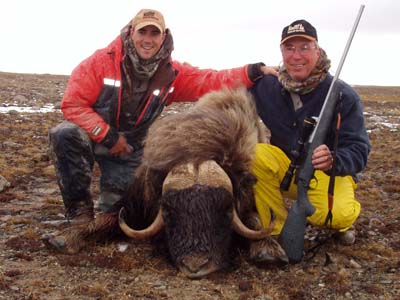 A week later, Chuck Cleveland and Bob Chandler walked into John’s Ashland office. They told him his growing business was just what Central Oregon and the City of Bend needed. John loved the hunting and fishing east of the Cascades. He wasn’t hard to convince.

By 1958, John Nosler, who had lived all over southern California and bounced around the Northwest in a truck for the better part of 20 years, felt like he had come home.

John moved his family and business to Bend, Oregon, where the company carries on his legacy with the Nosler Partition, Ballistic Tip, AccuBond and AccuBond Long Range and other signature products. The company also manufactures Nosler Custom rifles which was another dream of the founder.

Gary Lewis is an award-winning outdoor writer and host of Frontier Unlimited on TV. For a signed copy of the book John Nosler Going Ballistic send $25 to Gary Lewis Outdoors, PO Box 1364, Bend, OR 97709. Contact Lewis at garylewisoutdoors.com