PacWest Outdoors: Strap On Sixguns And Stoke That Lever-Action

Join the Single Action Shooters Society to explore family history and tune up shooting skills in the off-season.

A couple of years ago, digging through a box of old family photos, I came on a newspaper clipping of one Paul Cunningham, my grandma’s uncle. A larger than life character, his visage had been carved on a totem pole on Whidbey Island and I remembered what grandma had to say about him.

He was a big game hunter, a lover of fine rifles and fast horses, a friend of Buffalo Bill Cody. He was a frontier policeman in the 1870s and 1880s and a poet. He wore his hair to his shoulders, a Van Dyke beard, a collar and a bowtie and wrote under the pen name, Peppercorn. It was easy to find information and pictures on Ancestry.com and when I searched back through other relatives it struck me; My ancestors, throughout the 1700s and 1800s, always lived on the frontier and always moving west when it got too crowded. And a lot of them were solid people who married for life, worked hard and went to church on Sunday. 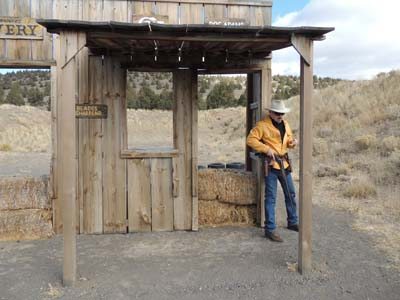 Practicing with the shotgun at the livery stable. Every range has their own style and each stage reflects the imagination of the clubs.

I went to church on a Sunday with the Horse Ridge Pistoleros at the COSSA Park, east of my hometown of Bend, Oregon. The mission is really just a plywood façade painted up to look like the front of an adobe building. There is a wooden cross, a church bell and a plywood vulture perched on the corner of the building. A sign reads Espirtu del Juego, which means something like spirit of the game. 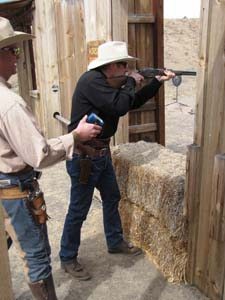 Gary Lewis (aka Peppercorn) shoots a Winchester 73 while Hoss runs the timer.

I introduced myself as Peppercorn to Palaver Pete, Big Casino, Whisperin’ Wade, Hoss, Dirt Digger and a bunch of other folks I already knew. You see, a cowboy is way better off coming up with his own handle than to let a bunch of ornery hombres come up with one for him.

I flashed my badge to prove my bona fides. I’d registered the nickname with the Single Action Shooting Society. I was probably the only one with a six-digit badge number. There are over 100,000 members in SASS and each has a unique nickname. Any SASS member can find a place to shoot any weekend in any state in the U.S. and in several foreign countries. 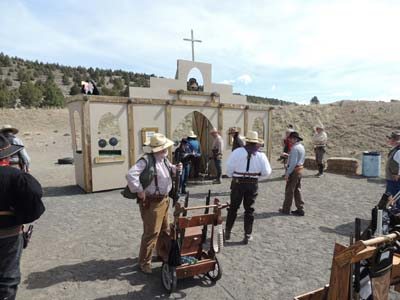 At the heart of SASS and cowboy action is 3-gun competition. Each participant assumes the identity of a character from the Old West or from a B-western. Most opt for an 1880s style with two six-guns, a lever-action rifle and a shotgun. Because I know a few of the guns my great-great uncle owned and I know how he dressed, I can interpret the rest. 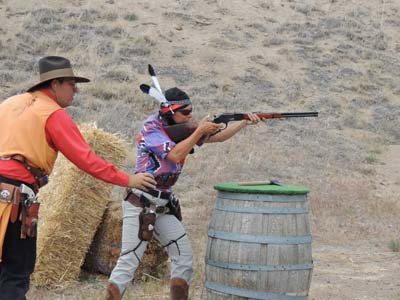 For my armament, I have a matched set of Model 1873 single actions from Pietta and Traditions, a Winchester 73 and a side-by-side shotgun.
The sixguns are chambered for 357 Magnum and have 5-1/4 inch barrels. They ride in a Kirkpatrick Long Hunter rig with a three-inch tapered belt and sliding two-inch drop holsters with eight-degree forward cants. The holsters are cut down in the fronts for quicker draws and flare at the top for ease in reholstering. 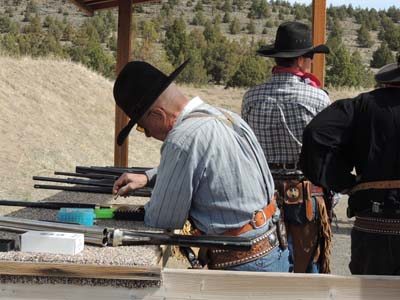 Palaver Pete loads a lever action rifle prior to shooting a stage at “The Mission.”

My Winchester Model 1873 is a current production Short Rifle with a straight grip stock, a crescent buttplate and a 20-inch barrel. Of course, the rifle and the revolvers share the same ammunition. I keep the rifle safe in a red, fringed wool blanket sleeve. Someday I’ll take this rifle on a pig hunt or a deer hunt. For now, I’m learning to shoot it fast and smooth.

I actually have two shotguns, a 1930s Lefever 12 gauge that wants a bit of gunsmithing and a modern CZ Ringneck 20 gauge that could use a tune-up too. That’s one thing you find out about when you start shooting cowboy action. Every gun needs a bit of work. To make it smoother and faster. 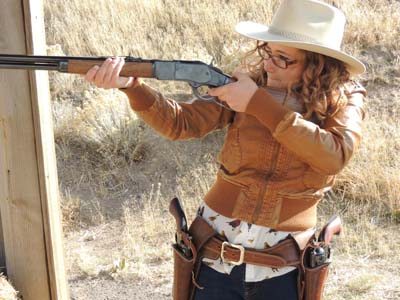 (Middle) Participants are free to adopt any Old West character they choose.

At the mission, I was confronted by an array of steel bad guy targets. I rested my hands on my guns while Hoss held the timer. I shot each target, first with the left gun then with the right, shooting both empty. Then I picked up the rifle, hit each target again and picked up the shotgun. There was one shotgun target on the left and two on the right. The last one launched a clay pigeon, which I powdered. I wasn’t super fast and I wasn’t smooth, but I shot clean, meaning I hit every target. Slow is smooth and smooth is fast. 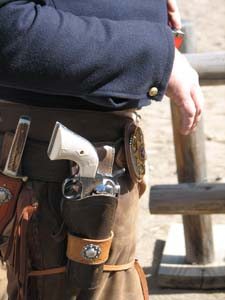 Cowboy action shooting is a good way to connect with a family’s past and American history at the same time.

Cowboy action shooting is a combination of historical reenactment and cowboy matinee. There are a number of categories for competitors, including age-based, duelist, gunfighter, classic cowboy/cowgirl, B-western and blackpowder. Participants are supposed to dress in clothing typical of the late 1800s, a B-western movie or a western series. Short sleeve shirts, tank tops, long sleeve t-shirts, designer jeans, ball caps and tennis shoes are not allowed. The rules are posted at www.sassnet.com

There are about 15 SASS affiliated clubs in my home state of Oregon. Locally, I can shoot with the Horse Ridge Pistoleros, Pine Mountain Posse at COSSA Park (my home range) or the Old 97 Railroad Rangers.

Cowboy action shooting is a good way to connect with a family’s past and American history at the same time. All the clubs are happy to welcome new members and loan out gear to get a greenhorn started. They’re even happier to come up with a nickname for you. All in the spirit of the game.