Spotting scopes are versatile and widely applicable tools. If you’re going to be hunting, birding, stargazing, or any other number of long distance viewing activities, you’re probably going to need a spotting scope. However, choosing your first one, or the one that’s right for your particular activity, can be intimidating. That’s why we’ve teamed up with Vortex Optics to explain the basics of choosing and operating a spotting scope.

First, let’s start with the different parts of a scope, and what they’re called. The lens that is furthest away from your eye is known as the “objective lens.” The lens closest to your eye is called the “ocular lens.”

On the barrel of the scope there should be a center wheel, which is used to adjust focus, and a second wheel, closer to the ocular lens that which is used to fine tune the magnification. More details on the focusing wheels can be found further down in this article. 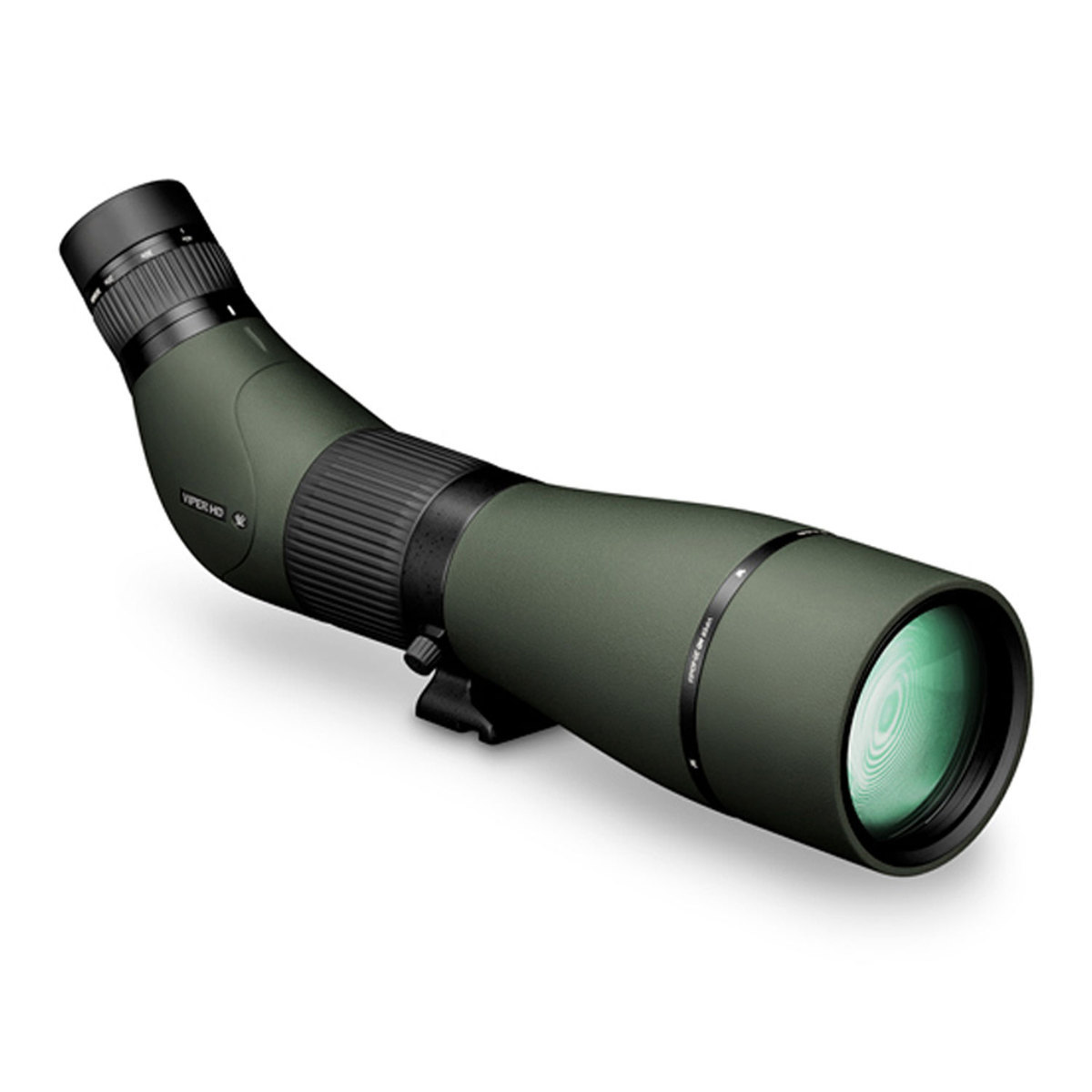 Now let's go over magnification and power. Each scope should have a set of numbers somewhere along the barrel. As an example, take a look at the Vortex Viper HD spotting scope; it has the numbers “20-60x85.”

The first set of numbers tell you how powerful the scope’s magnification is. So this scope can magnify anywhere from 20 to 60 times your average vision. Most general application scopes you’ll find will top out at 60.

The second set of numbers indicate the diameter of your lens. The larger the lens, the brighter the image is going to be. So the Vortex Viper HD spotting scope has an 85 millimeter lens. That is one of the largest options on the market, and is going to allow a lot of light through to show you a bright and clear image, even in low-light conditions.

A smaller lens will be less powerful, since it can’t let in as much light.

Magnification is only useful if you can actually see what is being magnified. That's why the quality of lens glass and its coating are also important. Every time light hits a lens, some of that light is reflected. Since you get the clearest picture when as much light as possible passes through the objective lens, most manufacturers will apply an anti-reflective coating to the eye piece. Some manufacturers also use a phase-correction coating which helps prevent chromatic aberration, or in other words, colors overlapping and creating a blurry or halo-ed image.

If you’re shopping for a truly high-end performance scope, you can also look for a pair with ED or HD glass. These lenses will give you a truer image, less reflection, and minimal chromatic aberration.

Something to keep in mind when choosing a spotting scope is its size and weight. For example, if you’re going on a backpacking trip, an 85 millimeter lens will have superior optics, but it might be too bulky or heavy to reasonably pack around.

A better choice would be a smaller lens, such as a 50 millimeter. Smaller lenses are designed to be lightweight and compact with around an 11 to 33 magnification. So they won’t be quite as powerful as the 85 millimeter, but they will be a more practical choice for certain applications.

Another aspect to consider when purchasing a spotting scope, is whether you want to use a scope with a straight or angled build. Manufacturers often offer both for most of their scopes. You might be wondering which option is best for you, but really it all comes down to personal preference. 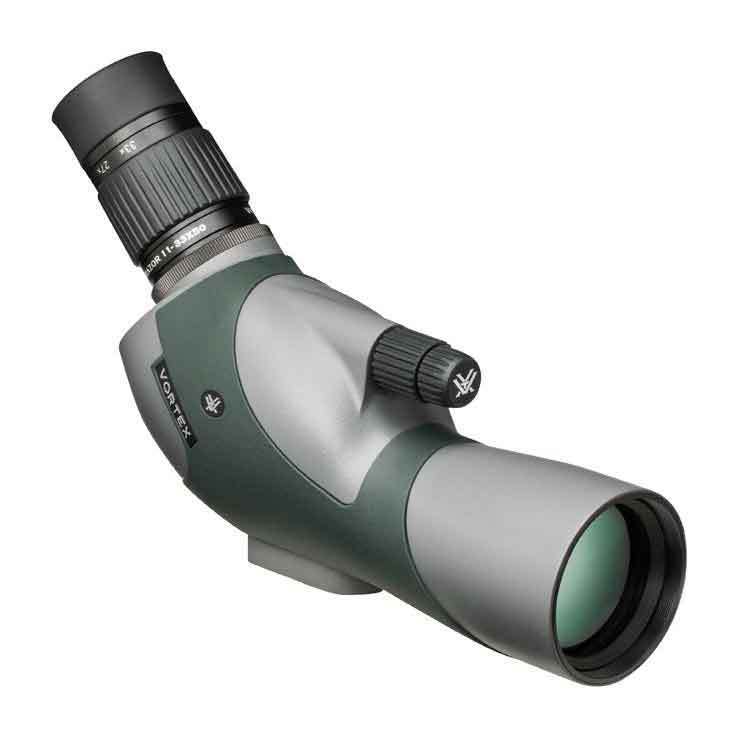 An angled spotting scope, like the Vortex Razor HD 11-33x50 (on the left), is nice because generally you can use a smaller tripod with it, so it’s more easily adjustable and your center of gravity will be lower, thus making the scope and its mount more stable. They can also be more comfortable if you’re going to be viewing anything at a higher elevation than you are, such as up a 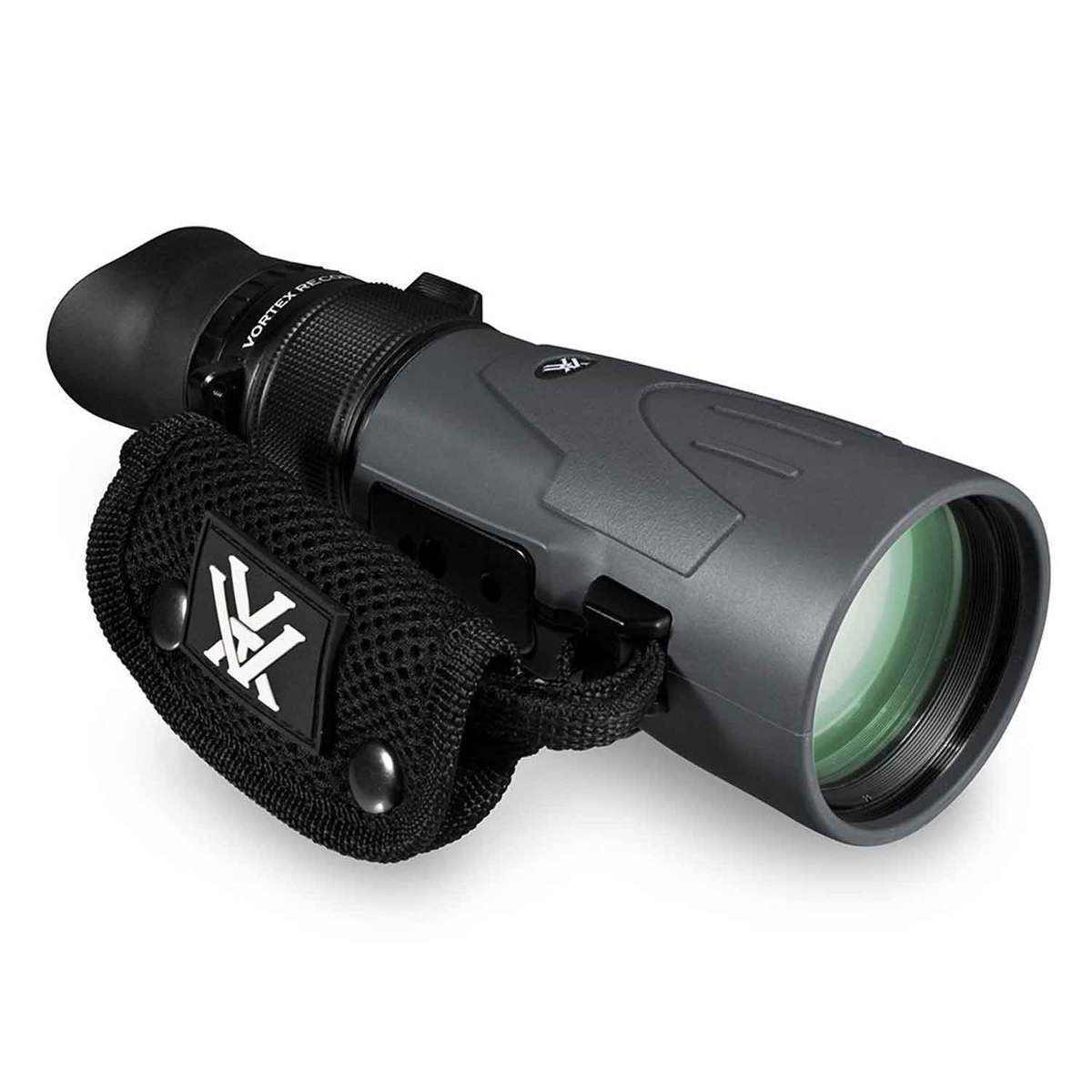 hill. Another bonus is that once the scope is mounted, you can turn the angled eyepiece down to fit the height of whoever needs to look through it, without compromising your line of sight.

One of the possible cons to an angled scope is that it can slow down your target acquisition, due to the fact that you can’t just point the scope look straight through towards your target. So if you need speed over comfort, a straight scope might be the best option for you. The straight models are also slightly easier pack, as they don't have an angled piece that you have to work around. If you get a travel sized one, like the Vortex Recon RT 15x50 (on the right), you'll save space and weight in your pack.

Obviously an important part of using a scope is making sure your view is in focus. Most models will have two knobs that will help you accomplish this. One will be for major adjustments, and the other will be for fine tuning.

To begin focusing your scope you’ll first adjust the main dial, which is usually on or near the center of the barrel, until your image becomes as clear as you can get it. Then, you’ll switch to the more sensitive dial, usually located more closely to the ocular lens, to really bring those small details into even sharper focus.

One of the really nice aspects of most newer Vortex scope models is that they all have a low profile main adjuster wheel. It’s almost flush with the barrel of the scope, making it sleek and less likely to snag on your pack, but it also has ridges so you can easily grip it, even if you’re wearing gloves.

Having a scope that’s waterproof is important if you’re ever going to be out in the rain or snow. Optics manufacturers usually use nitrogen or argon to “purge” the binoculars in order to prevent moisture, dust, and mold from seeping in. They’ll also use O-rings to seal the lenses so nothing can get in through those connections either. Most modern scopes are purged, but the higher end models will often have extra coatings and/or seals to ensure the best protection. Vortex also coats their optics with rubber armor that helps you maintain a firm grip, and protects your scope, should you accidentally drop it or knock it against something.

However, it’s still good practice to take precaution with your scope, even if it’s coated and waterproofed. Frequently check it for cracks or chips in the coating or rubber sealings, and keep it in a protective case when it's not in use.

Now that you know the basics of spotting scopes, you’re ready to go out and buy your own! If you have any questions, or would like a professional recommendation on which model would work best for you, visit us online at Sportsmans.com or at your local Sportsman’s Warehouse.