The Problem Of Drones

Drones, sUAS, UAVs, quadcopters, model aircraft; whatever name they go by, these little flyers are becoming more and more common and with their prevalence comes problems.

Aside from the general issue of drones crashing into things and potentially damaging property or people, there are a whole set of legal ramifications and requirements that can get you in a whole lot of trouble if you don’t know about them or choose to ignore them.

The Federal Aviation Administration (FAA) oversees the use of drones and has created a list of regulations regarding their use. First off, drones fall into two main categories under the code of federal regulations (CFR). Under the Special Rule for Model Aircraft (Public Law 112-95 Section 336), a sUAS (small Unmanned Aircraft System) or just UAS, is treated like any other model aircraft. It must be registered and the same registration number can be used on all of your drones. Your registration costs $5 and is a simple and quick online process.

Those who wish to fly their drones commercially and accept any payment for videography, journalism, photography or any other commercial enterprise are required to obtain a commercial drone pilot license called a Remote Pilot Certificate under CFR part 107. This license can cost hundreds and even thousands of dollars by the time you factor the lessons and training, as well as the testing fee of $150.

Under both regulations the following limitations apply:

Pilots have long been an esoteric bunch and a bit elitist, so it is no wonder that reading and understanding the myriad FAA regulations can be daunting and still not be a guarantee that you won’t make a mistake. The good news is that from an enforcement standpoint, they are willing to give warnings before they crush you under the hefty fines and jail time they have at their disposal for violating their regulations. If they pursue you civilly, the maximum fine for failing to register your drone is $27,000. If they pursue criminal charges the max jumps to $250,000 and three years in jail. The fine for operating a commercial drone without an RPC is $30,000. The FAA has issued very few fines and enforcements so far, but the registration requirement is less than five years old, which is fairly recent in legal terms, but you can expect them to increase enforcement as the infractions become more common.

“The FAA also has a number of enforcement tools available to address unauthorized use of UAS, including warning notices, letters of correction and civil penalties,” said Allen Kenitzer, the FAA Northwest Mountain Region Spokesperson for the FAA. “FAA may take enforcement action against anyone who operates a UAS in a way that endangers the safety of the national airspace system. This authority is designed to protect users of the airspace as well as people and property on the ground.”

The best and safest bet is to download the FAA B4UFLY App for Android and iOS or check online at faa.gov/uas.

On top of legal enforcement from the FAA, you may run into state and local laws that regulate where and how you can use drones. 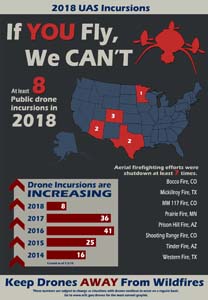 In most states, it is illegal to operate a drone in an area where firefighting aircraft are operating. Even if the fire is miles away, the ingress and egress routes of these aircraft can take them low over areas that may endanger them if drones are also operating. Because these aircraft have to refuel and refill retardant frequently, they may cover a wider area than that just near the area of the fire. Additionally, these aircraft operate much closer to the ground than normal aircraft, putting them in danger of contacting a UAS. While the FAA may impose a temporary flight restriction (TFR) in the area around a fire, local fire officials can also restrict drone operation in a fire area, even if there is no federal TFR. Because you may not always know that restrictions are in place, it is safest to just avoid operating a UAS in an area where there is wildfire. Flying in restricted airspace during firefighting operations is a crime and will be prosecuted. If you cause a firefighting aircraft to divert or drop its retardant short of the target it is a more serious crime and impacting an aircraft, preventing an aircraft from operating to fight the fire and causing any injury by flying in the restricted airspace can be prosecuted as a felony. Additionally, flying in restricted airspace can cause the grounding of firefighting aircraft and result in civil penalties if property is damaged as a result of the aircraft not being able to protect structures from fire.

“A good rule of thumb would be to avoid all active wildfires as there’s a good chance aircraft may be ordered to fight even smaller fires to prevent them from getting large” said Nickolas Howell, public affairs officer for the BLM Color Country Interagency Fire Center.

According to the National Fire Center, “In 2017, there were more than 36 documented instances of people flying drones over wildfires without authorization, threatening the safety of firefighters – only a few less instances than the 41 that occurred in 2016. Though no collisions occurred, on several occasions, air operations were forced to land and cease suppression operations until the offending UAS could be located and removed. These incursions greatly endanger lives, cost taxpayers money and increase fire size while aircraft cannot work to suppress the fire.”

Another use that outdoorspeople have found for their drones is as a means to expand their scouting for animals before and during hunting season. The laws are different in every state and it frequently takes a while for laws and regulations to catch up with emerging technologies, but states are starting to place restrictions on the use of drones for scouting. In Utah, where I live, the Big Game Guide Book put out by the Division of Wildlife Resources (DWR) specifically bans the use of drones to scout for protected wildlife. This leaves open the door for scouting for coyotes and jackrabbits, but not much else, said Mark Hadley, a spokesperson for the Utah DWR. “Utah does not allow the use of any aircraft and drones are considered aircraft, for hunting or scouting,” said Hadley. “It is best if people check with their state regulations, because each state is different.”

On top of that, the use of drones is regulated in state parks as well as National Forests and Parks. In Utah, ‘No Drone Zones’ are set up as needed to accommodate expected visitor traffic and animal migrations. At this time there is no blanket prohibition on the use of drones in Utah State Parks, but it can change and you need to check before you fly. Make sure to check with your State Park agency before your visit.

In 2014 the National Park Service issued a memorandum prohibiting any UAS from taking off or landing in a National Park. This means that as long as you maintain FAA line of sight requirements, you may take off and land outside of the park boundaries and fly into the park, but if you harass or annoy anyone you can be issued a ticket for disorderly conduct. Landing or taking off in the park is a misdemeanor punishable by up to a $5,000 fine and six months in jail.

With all of the layers of regulation, it is very easy to get crosswise to the law, but the FAA has been very proactive in providing guidance on the subject. The FAA website has reams of information available for UAS pilots and those looking to expand their drone adventures. It is well worth the time that you can spend reading as much as possible.

At the end of the day, hysterics aside, drones can be used safely and even the FAA allows their use by children as young as 13-years of age. Using some common sense, flying away from people, avoiding flying over stadiums and sporting events, not chasing animals with your drones, being considerate will go a long way toward making sure you don’t get on the wrong side of the law. Kenitzer suggested that operators check before they fly at www.knowbeforeyoufly.org for the latest updated rules and best practices.