In the right spot, anglers fishing Pickwick Lake can fish three states at once without moving the boat and possibly catch more than a dozen species in one day, but many people visit the impoundment to tempt monster smallmouth bass, particularly during the winter.

“Pickwick has really become one of the best bass lakes, not only in Alabama, but in the entire South for both largemouth and smallmouth,” said Tim Horton, a professional bass angler from Muscle Shoals, Alabama.”

Pickwick Lake spreads through 47,500 acres across parts of Alabama, Mississippi and Tennessee. The lake runs from Wilson Dam in Florence, Ala., 53 miles down the Tennessee River to Pickwick Dam at Counce, Tenn. Near Wilson Dam, the lake still resembles the old river channel. The Tennessee Valley Authority maintains the channel for commercial boat traffic, so it averages 10 to 12 feet deep, but some holes drop to more than 50 feet. The lower portion widens into a more characteristic reservoir. 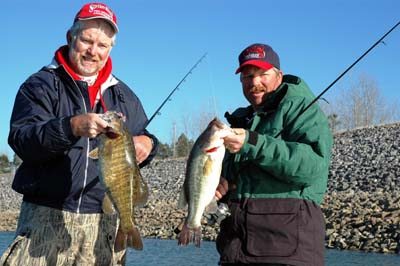 Roger Stegall, a professional bass angler from Iuka, Miss., compares his smallmouth bass to the largemouth bass caught by Steve Barnett while fishing in the Tennessee River tailrace below the Pickwick Dam near Counce, Tenn.

A River and a Lake
“Pickwick is both a river and a lake,” explained Jimmy Mason, a bass pro from Rogersville, Ala. “At the upper part, from the Natchez Trace Bridge to Wilson Dam, it’s a river. From the bridge toward Mississippi, it turns into a more typical reservoir. The lower lake has a phenomenal amount of ledges, grassy flats and structure.”

“Pickwick is a dynamite lake for big smallmouth,” commented Roger Stegall, (662-423-3869, www.Fishpickwick.com) a professional bass angler and Pickwick guide from Iuka, Miss. “I’ve heard of some 10-pound smallmouth. I caught one about eight pounds. It’s not uncommon to catch a largemouth, a smallmouth and a spotted bass on three casts with the same lure.” 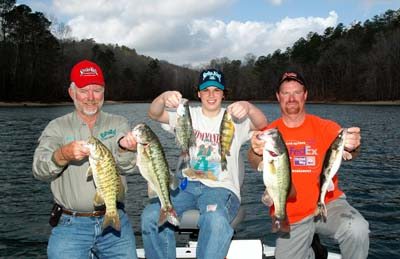 Roger Stegall holds up a smallmouth bass and a Kentucky spotted bass. Steven Felsher holds up a white crappie and a yellow perch. Darrell Moon shows off a largemouth bass and a sauger, six of the many species of fish found in Pickwick Lake.

Those Dam Bass
Although anglers frequently catch smallmouth, largemouth and spotted bass in the same honey holes on the same lures, the best smallmouth fishing generally occurs in the Wilson Dam tailrace near Muscle Shoals, Ala. Below the dam, the river flows through several channels and around numerous rocky shoals, islands, sandbars and other obstructions.

“The Wilson Dam area has a lot of current breaks like rocks, logs and stumps,” Stegall advised. “Fish will be near those current breaks. One of the simplest ways to catch smallmouth is to throw a smoke or chartreuse grub on a leadhead jig upstream. Let it go to the bottom. Hold the rod at about 10 o’clock, reel the bait about five or six cranks and let it fall back. Repeat this step. The fish normally hit when it falls.”

The Florence Canal flows around Patton Island near the dam so boats can bypass some shoals. Large vessels passing through the locks create current along this deep channel. Here, fish shad-colored crankbaits. When water flows through the locks or Wilson Dam, currents stir up the bottom, flushing baitfish and other forage downstream. The rolling current also adds more oxygen to the water, giving fish an energy boost. That combination of added oxygen and plentiful prey can kick off a feeding frenzy.

When the water flows through the dam, some people drift the river, bouncing live shad along the bottom. Tie a live bait hook on the end of the line. About two feet above it, add a split-shot sinker. Use only enough weight to keep the baitfish near the bottom. Fish this vertically as the boat drifts down with the current. If anglers drift over a good hole, they might maneuver the boat so they can anchor and fish the sweet spot.

Many people fish right next to the dam with either live bait or lures. Some people toss swimbaits against the concrete walls and let them drop like dying baitfish. Others run spinnerbaits or vertically jig slab spoons. When the TVA opens some gates, others that remain closed create slack spots. Fish frequently congregate in the slack water adjacent to current looking to ambush anything flowing in the current. 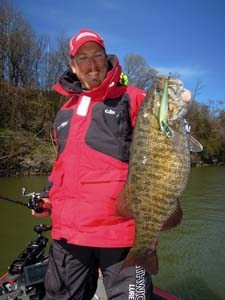 Jimmy Mason, a bass pro from Rogersville, Ala., shows off a smallmouth bass he caught on a jerkbait while fishing at Pickwick Lake near Florence, Ala.

Running the River
Even farther downstream, current from the dam can position fish. Like rainbow trout in swift mountain streams, smallmouth bass often hide behind rocks, sandbars, logs or other obstructions waiting for the currents to bring them something to eat. When brownies see something they like, they swoop out into the current, snatch it and then return to their lairs in the eddies.

“Typically, smallmouth go a little deeper and get in the eddies,” Mason explained. “In the winter, I like to fish close to the flow, but still outside of it. I look for anything that breaks the current, like a rock pile, sand and gravel bars or islands. I look for current seams where fish can get behind something and don’t have to fight that current.”

From the dam downstream to the Natchez Trace Bridge, the river flows around several islands, rocks and more shoals. Some old rocky jetties that once marked the natural Tennessee River channel can hold big smallmouth looking for baitfish concentrations.

“Those old rock rows are dynamite areas to catch smallmouth in the winter,” Mason recommended. “They create great areas where fish can get out of the main flow. When the river is flowing heavy, I like to fish those rock rows. I drift backwards with the current. I use the trolling motor to slow the boat drift and cast upstream. Then, I use the current to sweep my bait into the eddies. For big smallmouth, I throw 5-inch grubs on 6- to 8-pound test line. I also throw 1-ounce spinnerbaits or swimbaits. With the swimbait, I use a 1/2- to 1-ounce jighead, depending upon the current strength and water depth. My all-time favorite swimbait color is Foxy Shad, a shad color with a splash of chartreuse on the shoulders.”

As the weather warms in the spring, shad-colored topwater baits can tempt smallies. Bass frequently attack threadfin shad gathered behind rocks and other current breaks. Toss a topwater lure upstream and work it downstream, running it as close to rocks, logs, sandbars or other current breaks as possible.

Another hot winter bait, an Alabama or umbrella rig consists of a wire harness where anglers can attach four or five baits. People can put any lure type or combination on the rig, but many people use swimbaits. Coming through the water, the entire rig resembles a shad school.

Presenting several baits at once, an umbrella rig provokes the natural greediness and competition for food. If one bass strikes a bait, that motivates others to feed. In nature, bass often try to snatch morsels from each other’s mouths. Anglers sometimes catch several fish on one cast.

“An Alabama rig looks like a school of minnows or shad,” explained Gerald Swindle, a professional bass angler from Warrior, Ala. “Baitfish are normally in a school and rarely by themselves. A bass is programmed to feed more on schools of baitfish than on single minnows. I have done pretty well with many different bait combinations, but for me, the most effective has been swimming flukes with paddle tails. I always put junior flukes on the outside with a big fluke in the center.” 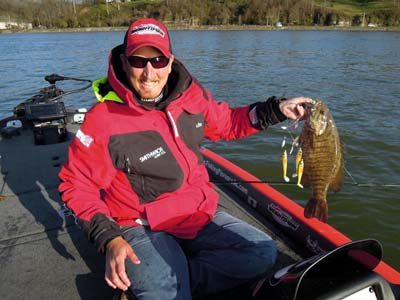 Jimmy Mason, lands a smallmouth bass he caught on an Alabama rig while fishing at Pickwick Lake near Florence, Ala.

While in the Pickwick Lake area, anglers can find food, facilities and accommodations in the towns of Florence, Sheffield, Muscle Shoals and Tuscumbia. Just up the river, people who prefer a more rustic setting might opt to rent a cabin or lakeside cottage at Joe Wheeler State Park (www.alapark.com/joe-wheeler-state-park). The park covers 2,550 acres on Wheeler Lake near Rogersville. State park visitors can stay in the resort hotel and dine in its restaurants.

For something really adventurous, spend the night in grain silo converted into a condominium at the Seven Springs Lodge near Tuscumbia. Hungry? Head down the canyon to the Rattlesnake Saloon (rattlesnakesaloon.net) and dine inside an ancient natural rock outcropping. The western style saloon offers such items as snake eyes and tails (stuffed jalapeno peppers and green beans), rattlesnake eggs (fried jalapeno poppers) and monster burgers.

Not far away, sportsmen can pay homage to hunting dogs at the Key Underwood Coon Dog Memorial Graveyard, more commonly known as the Coon Dog Cemetery. Open to the public, this sacred ground on Freedom Hills Wildlife Management Area near Cherokee honors more than 300 coon dogs buried there.

I am constantly looking for patterns and principles that can be consistently applied, or that can be applied across multiple species, locations or conditions...

The midsummer bite for many species is not exactly ideal. Many taper off their time on the water right now. Fine with me, but it doesn’t need to be that way....

Fishing
Outdoor Activity in the Era of Social Distancing

If you’re like most of us outdoorsy people, you’re undoubtedly feeling the cabin fever pretty strongly right now. It’s spring, we’re supposed to be out there...