Adventure On A Budget: Cowboy Quail

The normal social graces and hospitality associated with the gentlemen “Bob White Quail Hunts” of The south and mid-west vanish as quickly as do the bob white quail, the further west you travel. The change in landscape grows more dramatic with a Wild West cactus scene. Once in Arizona, when the landscape begins to be filled with the iconic Saguaro cactus, it takes on the backdrop of a typical John Wayne western. This is cowboy country and you can see why. Here the quail hunter will not be blessed by the likes of the bob white, since they politely covey up and hold for the dogs and hunters. Of the big three species of Arizona quail, only one, the Mearns’ comes close to offering the quail hunter and his dog the courtesy of those given by the bob white. The other two species of Arizona quail are a rowdy bunch. They need a whole lot of wrangling to approach them. The Gambel’s quail and the Scaled quail take as much energy to get a shot as the toughest cowboy expends on a fall roundup, bringing in the wildest maverick. Welcome to Arizona and to the Gambel’s and the Scaled quail!

Spot and Chase
The Gambel’s and Scaled quail present the quail hunter with many challenges, not the least of which is keeping up with them. Quail of the desert are difficult, if not impossible, to keep in range. As you attempt to close within a reasonable shooting distance, many, if not all, the quail will flush 30- to 40-yards ahead of you. Hunters are familiar with spot and stalk as a hunting method while quail hunting in Arizona is best described as spot and chase.

Information on Quail in Arizona
Quail hunting in the U.S. is not like “the good old days.” Conventional wisdom indicates quail populations across America are moving in a positive direction. This comes with the united efforts of private land owners and hunters providing habitat improvements on both private and public lands. The vast amounts of public land in a state like Arizona offer a smorgasbord of fall bird hunting. Quail populations in Arizona are driven by moisture and general weather conditions. These conditions have been great this year, throughout the state. Arizona quail are getting extra help with habitat improved by concerned quail hunters and the Arizona Game and Fish Department. The Mearns’ is getting a lot of this extra help in their southern Arizona habitat. In that regard, you can visit AZQUAILTODAY.COM. This site will provide the quail hunter with up-to-date information on quail hunting across the state. 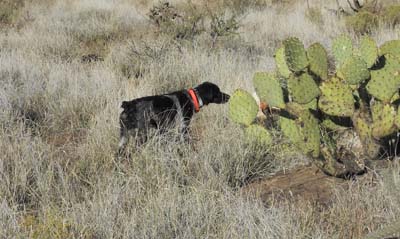 Gambel’s, Scaled and Mearns’
If you wish to have the opportunity to put all three species of Arizona quail in your daily bag limit, hunting southern Arizona, south of Tucson is the ticket. The further south in Arizona means the better the chances for the beautiful Mearns’. And if you wish to use your dog, the Mearns’ is much more dog friendly due to the habitat and terrain of southern Arizona. Be advised, if you do use a dog anywhere in Arizona, rattlesnakes are not uncommon. October is an active month for rattlers. Cactus, in every known variety, abound, causing another hazard to both dog and hunter. Jumping Cholla and Cat Claw thickets prove challenging for both hunter and bird dog, throughout the Sonoran Desert. The daily bag limit for quail is generous, with a 15-quail per day aggregate limit, of which no more than eight may be Mearns'. The caveat in the quail season is that the season opener for the general quail hunt of Gambel’s and Scaled’s begins October 6, 2017, while the season for Mearns’ doesn’t open until December 8, 2017. Both of these seasons end on the same date of February 11, 2018.

Sidebar Bird Hunts
Bonus sidebar bird hunts during the quail season in Arizona include a viable mourning dove hunt, which begins on November 24, 2017 and ends on January 7, 2018. Daily bag limit is 15 for the mourning dove. The Eurasian Collared-Dove season is open year-round with an unlimited bag and possession limit. In addition, waterfowl season is open at times during the quail seasons. The Arizona Game and Fish Department provides details on the waterfowl seasons - you can visit www.azgfd.gov. It is possible to take ducks, geese and mourning dove for a great mixed bag of game birds.

Central Arizona offers great hunting for the Gambel’s quail. Phoenix to Wickenburg to Gila Bend, with the canal system and a couple of flowing rivers, marks this central Arizona Area. In eastern Arizona, the river and cropland area from Safford to Duncan provide a good Gambel’s quail population. The chain of lakes north and east of Phoenix provide a water magnet for all wildlife. The land surrounding Lake Pleasant, north of Phoenix to the Hassayampa River Drainage are other places to spot the Gambel’s quail.

Water is Key
The desert tanks provide water that attracts more birds and other wildlife than one would ever think of in a totally desert environment. Riparian areas are easily spotted in a desert area and usually green in these areas means water may be available. Bird hunting around water is always a good idea in the low desert areas, all the way south to the border of Mexico. Sierra Vista, Green Valley and the surrounding areas are about as far south as you need to go. It is advisable not to hunt too close to the border of Mexico. There are eyes in the sky and most people who are carrying weapons near the border will receive a visit from the Border Patrol.

Hunting the Gambel’s
If you have ever watched any western of the John Wayne vintage, you may note a giant Saguaro cactus in the background. If there is a Saguaro cactus in the film, then listen closely and you may hear the very familiar call of the Gambel’s quail, as recorded in the movie. Once you get in good looking quail country, stop and get out and listen. Early in the morning they may be calling. It is worth buying a quail call since they are available at a reasonable cost and calling may help you locate a covey. Gambel’s quail can be found across the lower half of Arizona and along the Colorado River Drainage of north-central-western Arizona to Yuma.

I would advise to plan on covering a lot of ground, in order to catch a covey on the ground. I do not advise picking a spot and walking until you have spotted a covey, running or flying away from your vehicle. If you are renting, a jeep will do. Any enclosed vehicle is a plus in the low desert where dust can be four or more inches deep. Keeping dust off of equipment and your person is an issue in desert hunting. Any open-air ATV type vehicle will work, but make sure you have eye, ear, nose and throat protection. Kids must wear helmets.

The Zigzag
Once you have a covey in sight, any approach you take will most likely split them up. As you approach, the covey will run and rise at distances that do not allow viable shots. Try to keep track, like never before, of the number of quail seen and their directions. And remember the area where the covey rose. Slowly and carefully zigzag through this area. Some of the birds probably did not fly, so look for brush that might hold a bird or two, as you zigzag through the area. Also, take a moment to plan ahead and use your GPS to see if there are any roads or changes in relief in the direction the covey flew. Both roads and changes in relief are natural places quail may hide until they figure out the direction from which the perceived threat is coming. These are great places to flush singles. Take your time and try to flush as many birds as you have time to count. 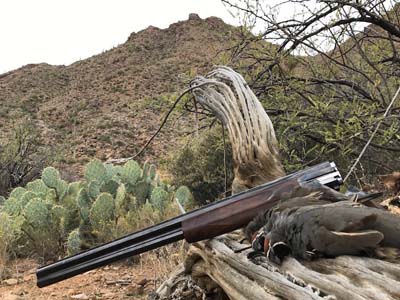 Cost
Non-resident combination hunting and fishing is $160.00 for one-year or $20.00 per-day. Youth, ages 10 to 17, may buy a non-resident youth license for $5.00. Motel room rates are available at a reasonable cost along the interstate and state highway systems. Rooms run in the $50.00 to $100.00 per night range. Book as far in advance as possible for good rates and peace of mind. Fall and winter are prime times for snowbirds to visit Arizona. Meals cost from $8 to $11 in the Metro areas and are available 24-7. However, in the more remote parts of Arizona, food and gas will be more expensive and may not be available after 8pm.

Cowboys and Quail
Cowboys are as tough as Arizona quail. The flowing grasslands of southern Arizona are the perfect place for the Scaled quail and the cowboy. Add a little more brush to the grassland mix and find along with the cowboy, the Mearns’ quail. And just as widespread as cowboys are throughout Arizona, so are the Gambel’s quail. The Gambel’s and Scaled quail share headgear that even a cowboy will take a second gander. The Gambel’s quail sports a top knot and the Scaled quail sports the mohawk or gel-styled head feathers. These are the rowdy ones of the quail clan, so “ki-yi-yippee-yippee-yay” to the hunters and quail of Arizona!