Adventure On A Budget: First Shots!

Dove Season Opens Another Eventful Fall for Many Sportsmen

While early September temperatures could approach 100 degrees in some states with legal mourning dove hunting, opening day unofficially marks the transition between summer and a new season of fall outdoors adventures. Usually held in September, early dove seasons traditionally open before most other seasons, thus giving many sportsmen their first opportunity to hunt in months.

One of the most widespread, popular and numerous game bird in North America, mourning doves can provide intense action in the right place. Extremely swift and agile fliers, doves frequently embarrass even the most skillful wingshots. The streamlined birds can fly faster than 55 miles per hour, but always seem to go much faster. With twisting, erratic flight patterns that any jet fighter pilot would envy, a dove almost seems to anticipate where shot might fly and uncannily dodge the stream.

To hunt doves, most people scout for a concentration of birds. Thousands might populate a field one day, but disappear by the next, particularly as hunting pressure increases. Doves usually congregate in agricultural fields, grasslands and savannas dotted by occasional trees, but might also appear on powerlines, forest clearings or food plots made by deer hunters.

To find doves, look for the four main things they require – food, cover for safety, water and grit. Food comes easy. Doves mostly eat small seeds such as sunflower, millet, sesame seeds, wheat, corn and many native grass seeds. They may consume their weight in seeds each day. The small birds usually like to pick seeds off bare dirt, but under some leafy canopy cover that can hide them from hawks and other predators is preferred. Sunflowers provide an excellent combination of good food at dirt level plus overhead concealment.

“When feeding, a dove likes wide-open bare ground and big clean fields,” advised Vandy Collins, a dove hunter from Faunsdale, Alabama. “I plant corn and sunflowers in different strips around a field and leave some areas with clean dirt. Doves love standing sunflowers with bare ground under them because they can get away from hawks and other birds of prey. If doves get down under those sunflowers, they feel a little more secure in that cover, but they can still find seeds on the bare ground under that canopy.”

For decades, most people simply picked a good area along the edge of an agricultural field and hunkered down in cover by a fencerow or tree line to wait for the birds. Many people bring buckets or folding chairs to make the wait more comfortable. Sometimes, whole families bring food and refreshments with them to make a picnic of the hunt.

In recent years, more dove hunters began taking tips from waterfowlers by placing decoys to attract the birds. As with ducks, doves typically feed at first light, usually arriving in the fields before daylight. For a morning hunt, try to locate where birds want to feed and place some decoys. Just like in waterfowl hunting, decoys help bring the birds in close and make them slow down for a landing among their brethren. Sportsmen can stick some decoys on fences or branches to give birds an illusion of safety, particularly in a large area with heavy pressure.

“Like ducks, doves stay in groups because there’s safety in numbers,” explained Mike Morgan, a hunter from Florence, Miss. with Mojo Outdoors. “If they see birds moving in one area, they figure that’s a safe place, so they go to that area. People can clip dove decoys on a barbwire fence or tree branch. Some people might even put up a string of decoys, maybe eight to 16 static ones.”

Where legal, some dove hunters place spinning wing decoys on poles above the ground to simulate a bird landing to feed. The spinning wings create a strobe effect that looks like wings flapping. When feeding, doves normally congregate in numbers. Lonely doves might see the wing flash from miles away and come to investigate.

“We use a lot of spinning-wing decoys for dove hunting,” said Levi Howell, a guide with the Pintail Hunting Club (979-966-7732, pintailhuntingclub.com) in Garwood, Texas. “Sometimes, doves almost land right on top of the decoys. We put them where we want to shoot the doves.”
Do not place spinning wing decoys directly in front of a hunter. The motion of the decoys will focus a bird’s attention. Place the motion decoys facing into the wind about 20 to 30 yards off to the side, forcing birds to look in that direction and away from the hunter. Doves feeding on the ground typically gather in a circle, so they can watch for danger coming from every direction so place a few static dove decoys to simulate feeding birds. Add a few more in low bushes, fences or other places to mimic lookouts. 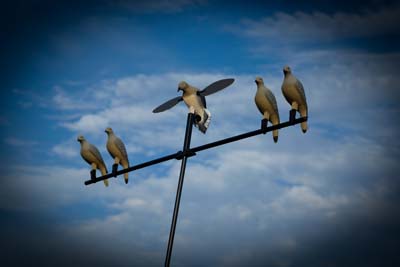 “Spinning-wing decoys have always been about attracting birds from a distance that would otherwise never see the spread,” instructed Terry D. Denmon with Mojo Outdoors (www.mojooutdoors.com) in Monroe, La. “In most places, doves come in from multiple directions. If we want to shoot doves at 25 yards, we put a spinning decoy out 25 yards. I usually add about a dozen static decoys around the spinning-wing decoy. I place them in about a 10- to 15-yard circle as if they are feeding. If I’m sitting on a fencerow or tree line, I’ll scatter a few static decoys up and down the line.”

After feeding for a while, the full, happy and content birds look for a place to rest and digest. While “nooning,” they perch in tall trees, electrical wires or other places that give them a good vantage point for spotting any danger. Frequently, other doves join birds on a high line. They might stay in their nooning area for most of the day unless something disturbs them.

To provide good perches for doves, some people install mock telephone poles and string dummy powerlines between them next to their dove hunting fields. To place doves on such phony phone wires, sportsmen use old-fashioned push-buttoned spin-casting rod and reel outfits. Rather than a tempting bass lure, they “bait” each fishing rod with a dove decoy.

Toss the decoy over the line and reel it back up to it. Try to make the decoy look as much as possible like a live dove perching on the wire, exactly what birds expect to see. However, even if the decoy sits a little crooked, the silhouette of it might still attract birds from long distances. A little breeze creates some movement that completes the illusion as long as the decoy doesn’t swing like a pendulum.

Sportsmen might want to add a few more decoys beneath the wires to mimic birds feeding on the ground. People can also use this technique to place dove decoys over high tree branches or other places where the birds might hope to spot their cousins, BUT NEVER TRY THIS WITH ACTIVE ELECTRICAL WIRES!

After nooning for a few hours, birds might want to feed again in late afternoon. With no teeth, the birds cannot chew their food and must swallow seeds whole. To break up hard, rough seeds, doves also swallow small pieces of gravel or sand. Sportsmen might spot them “dusting” around grit piles or sandy patches, making such places good areas to set a few decoys in the afternoon.

Before sundown, birds usually seek water again. They must drink water every day to help digest the seeds they consume. In late afternoon, doves generally congregate around shallow streams, stock tanks or ponds where they can drink. Ponds with sandy or gravel shorelines also give them opportunities to swallow grit. A small bird like a dove does not need to visit Lake Michigan to get water. Just a tire rut filled with water in a gravel or dirt road could suffice in an arid area.

When going to water, birds fearful of bobcats, foxes, raptors and many other predators typically don’t go directly down for a drink. They normally find a high vantage place to perch for a while to look for predators before dropping to the ground. 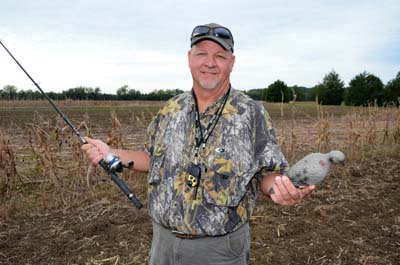 Hunters looking for more active, adrenaline-pumping excitement might try jumping doves. Almost like quail hunting, but without the dogs pointing coveys for them, hunters walk along tree lines, fencerows, through low brushy savannas or high grasslands to flush birds from cover. The birds habitually flush only when necessary. Their broad, elliptical wings make a distinctive fluttering clatter, instantly alerting hunters to the action. 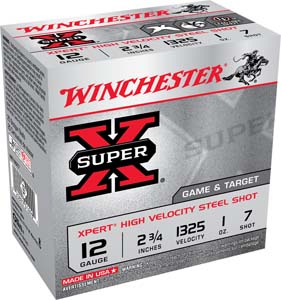 Sometimes, several people might spread out a safe distance from each other to scour an area for birds. Occasionally, doves only fly short distances after flushing to land in high trees. Lucky hunters might possibly jump them again. When flushing doves, use a light, fast shotgun with a modified or improved cylinder choke loaded with number 7.5 or 8 shot.

In many states, sportsmen can also hunt Eurasian collared doves and white-winged doves. Native to Asia, Eurasian collared doves arrived in Florida in the 1980s and spread across the continent from there. Much larger than mourning doves, collared doves sport their namesake black bands around their necks. Native to the southwestern United States, Mexico and Central America, white-winged doves began expanding their range northward and eastward in recent years. Now, the birds with the distinctive white wing patches occupy fields from Kansas to Florida.

Many states set long seasons with liberal limits, but after the opening weekend enthusiasm fades, many sportsmen forget about doves as other seasons begin. Therefore, some of the best dove action occurs in late season, particularly in the Southern states. As cold fronts hit, birds migrate southward, augmenting resident populations. In late season, sportsmen might even find themselves alone on the best fields as hunters shift their focus to other game.

With the potential for incredible shooting in the right place, hunting these challenging game birds provides an excellent way to introduce children to the outdoors. And, dove hunting is one of the most cost-effective activities that you can take part in. Light game loads can be found at your local Sportsman’s Warehouse for under $6 per box and just about any shotgun you may have at your disposal will do the job.

Just remember one thing – if you do venture out to pursue these little devils starting next month, make sure you take along plenty of ammo, just in case your early season skills need a little refining!