Amateur Outdoorsmen: How to Choose the Right Shotgun Choke

With the vast array of after-market shotgun chokes available today, choosing the right one for your gun can seem a daunting task. Here’s some information that might make that task a little bit easier.

Depending on whose list you use, there are about a dozen different choke constrictions to choose from. More open constrictions like skeet and improved cylinder are used largely by trap and skeet shooters and upland hunters. If you intend to use the same gun and choke for sporting clays and decoying ducks, you might consider a light modified choke.

Modified was once considered the choke of choice for steel shot and to a large extent, it still is. However, advancements in after-market choke tubes have brought us more and better options, like the improved modified, which reportedly patterns large steel shot better than modified.

And if you’re pass shooting at longer ranges, there’s the light full. If you’re shooting non-steel, non-toxic shot, you can go even tighter, to a full, for long-range pass shooting. Tighter chokes like the Xtra-full and Super-full are designed more for turkey hunters who are aiming at a stationary target rather than for wingshooting.

Waterfowling is a rigorous sport, so you’ll want something up to the task. Better after-market choke tubes are manufactured from 17-4 PH grade stainless steel, then heat-treated to a high strength level so they resist wear. You should also look for a matte, Parkerized or black oxide finish to reduce glare.

There are several good reasons to consider an extended tube.

First, they tend to pattern better than flush-mount chokes because constriction occurs more gradually and uniformly in the longer taper and parallel section.

Second, extended tubes typically have a knurled or fluted grip allowing for tool-less installation and removal. Third, there’s usually an exposed stamp or imprint indicating the constriction so you don’t have to remove the choke to tell what size it is.

Furthermore, they allow you the option of ported or non-ported. The former offers the additional advantage of venting gases to reduce recoil and muzzle lift.

The better ones use diagonal porting angled away from the shooter to reduce side blasts. 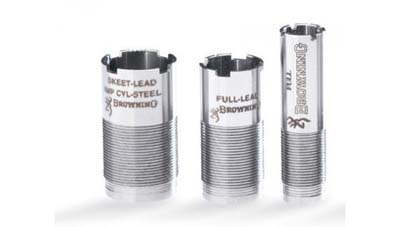 There is no one choke for all needs and there’s a couple different ways to address this.

Several companies sell sets of two or three tubes for short-, mid-, or long-range shooting. Old timers probably remember the Poly-Choke, a single tube that allows you to change constriction with a simple twist. It, and several others, are still around and offer a one-size-fits-all alternative. 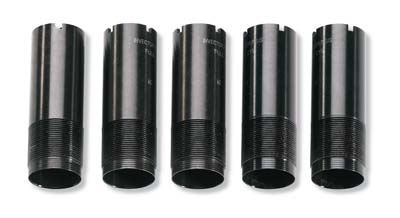 That just leaves you with finding the right choke for your gun, an area where gun makers have done a bit of a disservice to the consumer by not establishing an industry standard for choke threads.

With few exceptions, you need a different tube for each brand and in some cases for different models from the same manufacturer.

Fortunately, most choke tube makers have a choke for most brands and models.

Bear in mind that every gun/choke/load combination shoots differently. If you already have a gun and choke, the easiest variable to change is the load. Get together with your hunting buddies, swap loads and see which ones pattern best in your gun, with your new choke. And, make sure you talk to the experts at your local Sportsman’s Warehouse before making your decision.