This is the Golden Age of the Rifle. Never before have good rifles and rifle scopes been so affordable and accessible. Today’s optics are far superior to the glass we used 20 years ago and a scope can be tailor-made for an individual to wring astonishing accuracy from his or her rifle. A hunter can buy premium off-the-shelf ammo that, under the right conditions, is capable of minute-of-angle accuracy.

But all the advancements in manufacturing are no substitute for time at the shooting bench. Rifle, optics, and cartridge have to be harnessed in a pre-hunt ritual we call sighting-in. 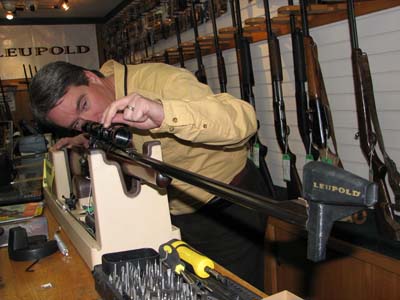 At the sporting goods counter, a hunter can have his new scope bore-sighted by the same fellow who sold it to him. The technician uses his eye or a laser to align the scope with the bore. Bore-sighting saves a little time at the range, but it is no substitute for sighting-in. A bore-sighted rifle will probably be "close", but close might mean that the bullet strikes within three feet of point-of-aim at a hundred yards. That’s not good enough when a big buck stands up across the canyon or a bull elk steps into a clearing 200 yards away.

Most rifle scopes have two turrets – one for windage (to move the bullet impact left or right) and one for elevation (to move impact up or down). Remove the turret caps and the crosshair can be adjusted by inserting a coin or twisting the dial clockwise or counter-clockwise. Most scopes are calibrated such that one "click" equals an adjustment of 1/4-inch at 100 yards.

All Ammo Is Not Created Equal

Sight-in with the ammunition you’ll take on the hunt. Don’t bring bargain-basement bullets to the range when you plan to use premium projectiles in the field. Downrange performance is likely to be very different. You can use the cheap stuff in practice if you want, but to establish accuracy, you want to use the hunting bullet.

And one box of 20 rounds is not sufficient. Take at least two boxes to the range and have another set aside for the hunt. If you’re buying factory ammo, make sure the lot numbers match.

Here are five simple steps to take to make sure that your rifle is sighted-in before a deer or elk hunt: 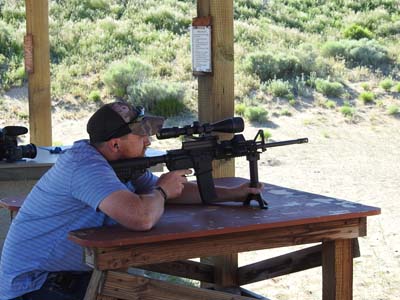 Trouble-shooting on the bench

The bench is the best place to work the kinks out of a big game rifle. Sometimes groups go gunnysack.

"The Flinch" is the biggest obstacle to accuracy, but you can control it by practice. After you’ve eliminated the "Flinch" as a factor, there are several ways to troubleshoot big groups.

Stringing is a common problem. Bullets impact on the target in a vertical string, which indicates that the barrel is coming into contact with the stock. The ideal is to have a gap, about the thickness of a piece of paper, between barrel and stock. There are several ways to correct the problem, but they’re best left to a gunsmith.

Scopes can fail and the best time for them to fail is in practice. Once, preparing for a hunt in the Far North, a scope went south on me. I discovered the problem when the 100-yard groups opened from 1.5 inches to 1.5 feet. Better that it happened at home than on the hunt.

When groups change dramatically or are hard to control, loose scope bases or scope rings may be the culprit. Make sure the mount and ring screws are tightened. I use blue Loc-Tite to keep the screws from rocking out during recoil.

Ammo may be the culprit. Modern rifles should hold a 100-yard group inside three inches. Due to factors like twist and barrel weight, some ammunition doesn’t shoot well in some guns. The closer you get to a one-inch group at 100 yards, the better. If groups are unacceptably large, try a different bullet.

Now it’s time to practice. Shoot off-hand, from improvised rests, from sitting, kneeling, and prone positions. Use a bipod and shoot from shooting sticks. Shoot at close range and out to 300 yards and beyond.

This is the Golden Age of your rifle. Learn how to make it perform and your seasons will be golden.