Put simple geometry to work and put a gobbler on the table.

The one thing I almost always forget is something to sit on. There have been days when I have sat against the same tree for four hours. A camo cushion helps. But this gets to the hardest part of turkey hunting - where do you put the cushion?

On a turkey hunt, we should think in terms of the geometry: the lines, the arcs, the angles. The spheres, the cones, the triangles. We can apply the geometry, the mathematical study of shapes and space, but in hunting there are no formulas. Instead, we can put deceptions to work, proven producers that put birds in the plane of our sights each season. 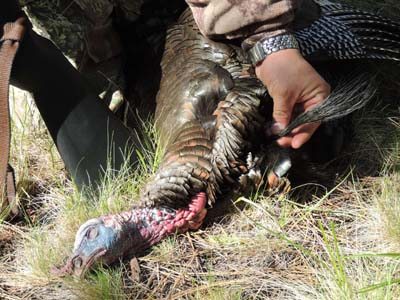 This bird was on a ridge, headed south. A strategy of running and arcing in on his trajectory put the bird in front of the bead.

A Good Ground Game
We know where birds roost and we know where they feed. To get from Point A to Point B, they travel the same routes until something pushes them into another pattern. This is where it pays to watch for sign - three-toed tracks, cylindrical droppings, feathers and wingtip drag lines.

Plan to set a ground blind at a morning stand and another one at an afternoon ambush. Build the blind from native materials - drag and stack fallen trees and limbs - or bring a store-bought hide. The important thing to remember is the turkeys are using this trail and they will show up sooner or later. Plan to stay in one place for up to three hours.

Bank on a decoy or two to catch the birds’ attention. To draw the birds in range, I prefer to keep the decoys within ten yards of the blind.

When they come into view, they are likely to stop and cast a suspicious eye on the faux flock of fowl. Try to plan the setup so the gobbler sees the decoy at 30 yards or less. And be ready to shoot in case they don’t charge in.

That’s the way it worked when I took my friend, Russ Scott, on his first turkey hunt. We set the blind along a logging road and settled in with our backs to an intersection of two other roads.

With three decoys (one hen and two toms) arrayed in front of the blind, we thought the birds would charge in.

First came a hen that eyeballed our set, then peeled off hard. A half hour later, five gobblers trotted on a parallel line over the hill. When they saw the decoys, they stopped. If you had scribed a circle at our position, they would have been on a 30-yard radius. The lead bird took a tangent and the rest of them followed. Except for the bird at the back. He took one more look and Scott punched him with a load of No. 5's. 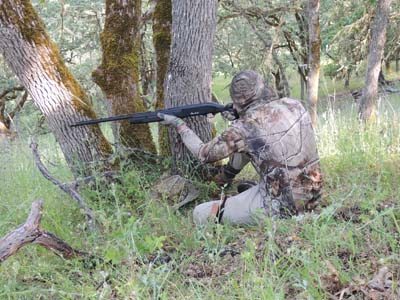 Set up at the end of the line. One hour and twenty minutes into the stalk, five gobblers trotted into view.

A Travelin’ Tom and a Mobile Missy
From time to time, a hunter can encounter a tom that gobbles back to calls, but seems to have an agenda. He is headed somewhere and nothing is going to turn him aside, even our most plaintive clucks and purrs. Maybe he knows where a willing hen is waiting. Maybe he has a hen or two in tow. That’s what happened to us on one late season hunt.

No matter what we tried, we could not get this turkey to commit. He would gobble to our hen talk, but he stayed on the ridge he was on. For an hour, we tracked his progress south and when we heard him gobble from a lava flow, we swooped in and tried one more time.

I was with friend and fellow scribe, Troy Rodakowski, on this hunt and he had set up well behind me. I saw the turkeys first. The gobbler and then his hen. And, if she had ears, you would have seen the smoke rolling out. She was that mad. But he could not resist Troy’s plaintive sounds. I picked him up over the plane of my Weatherby, centered the bead on his head, the eye the point of the circle and the radial that represented its neck and squeezed.

The big boss gobbler went down with a flop. The hen scuttled away with a backward glance and one more, “I told you so!”

This is a late-season ploy and the chance to get in front of a traveling tom might only happen once in several seasons of trying, but recognize the opportunity when it knocks.

Figure out the way the bird is headed, then try to get out in front of him by at least 200 yards. He is headed on a straight line and the hunter has to really move to make the call set and then arc out and back to try again. On our lava ridge hunt, we arced in on the same bird three times before he strutted in like the playboy he was. 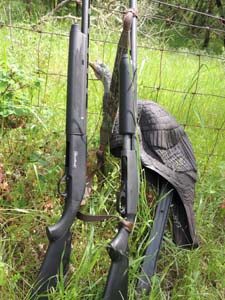 It helps to know where the fences are because turkeys sometimes hold up at an obstacle like this.

Simple Geometry
Picture three points on a line. At Point A, a group of gobblers lounges in the sun. At Point B, a lonely hen begins to cluck. Point C is where you want to be. A hundred yards, two hundred yards farther on. Make a few subtle hen sounds, then go quiet and wait.

When Jim Harris and I spotted these toms, they were a long, long way out. Harris was carrying a camera, so the move was mine to make.

There was no way they would come to my calls across a half-mile of open pasture. We could not go to them because they were on the neighbor’s property. When I called, one strutted. And then a hen lit up, way up high on the ridge. The toms, all six of them, started to move. That gave me an idea. Since this was the last day of the season, it stood to reason there was only one hen up there for six males. Six minus one equals five. Simple math.

If I got in line with her and called soft, chances were good that five males would still be without a female. They could just come right to me on a straight line. Simple geometry.

Lined up behind the hen, I went to work on the box call. I heard two more gobbles and then nothing. If they showed at all, I figured the bird in front would be the biggest of the five left.

There were no more turkey sounds.

Running and gunning in a pine forest, Lewis and Troy Rodakowski encountered a gobbler running a ridge line. On the third arc, the duo tolled the gobbler in - against the scoldings of his angry hen.

It would have been easy to call it quits, to pack it in and try to find another bird or throw my tag away. But I remembered. Those birds had a long way to go and the temperature was already warm on its way to hot. I guessed they would not waste time gobbling.

I looked at the box call in my hand.

If there were turkeys on the way in, they had my location pinpointed. I wondered, how quiet could I make this call?

With a light touch, I stroked the paddle against the chalked edge, then put it away. A turkey’s hearing is tuned to hen talk and a plaintive, whispered “come hither” is all a giddy gobbler needs to hear.

One hour and twenty minutes after we started to work this bunch, five gobblers trotted into view.

The grass was too tall to check beard length. I snapped the safety and fingered the trigger as soon as the first red-headed bird cleared a tangle of downed limbs.

Geometric theorems and postulates are great, but I like trigger-nometry best of all.

We like wild turkey way better than cage-raised domestic birds and I think it’s because wild birds live the way nature designed them. They thrive on a diet of weed seeds, bugs, snails and other edibles. Their meat is lean, contrasted with fatty factory farm birds, raised in cages and fed growth hormones and antibiotics to keep them alive.

Our first wild turkey we cooked a bit too long. It was a little dry. I remember Merrilee said, “Next time I’ll cook it in a bag to keep the moisture in.” Every one since has been delicious.

The thing to remember is, wild birds don’t carry any fat, while domestic birds are fatter and substantially bigger. Wild turkeys cook up quite a bit faster, because there is less meat and fat. When a wild turkey is cooked right, it can be every bit as tender as a domestic bird and way more flavorful.

My last bird was a jake, taken right before Christmas. I wrapped it with strips of bacon, laced it with Justy’s Jelly (Very Berry Jalapeno), tied it up with string and slow-smoked it inside my Camp Chef pellet grill.

If you haven’t tried wild turkey, it is not as easy to find as a Butterball in the grocery aisle, but the hunt makes a better story to tell around the table.