Pro's Tips: Preseason Scouting to Get the Most out of Hunting Season

When I was a young boy growing up in Colorado, I couldn’t wait for deer season to get here. Even at 7 years old, I was more excited for deer season than I was Christmas. However, scouting wasn’t something that we ever did or even talked about. My family had been hunting the same ranch for decades and we had a barn full of giant buck racks hanging from the rafters. We always had our same lookout rocks and stands of timber we pushed, which always yielded plenty of big muley bucks.

Hunting today is a totally different experience. I’m sure there are plenty of families still spending a week in the woods during deer season as vacation. They are hoping for a giant, but just like everyone else, and occasionally one will fall to these hunters. However, the majority of big bucks and bulls that get harvested are due to countless hours in the field scouting and trying to turn up a few potential shooters that would likely make the record book. Its literally thousands of miles in the truck every summer. It’s being up early and staying out late as the magical velvet grows into what we hope will be a massive rack. We pray for mild winters, good spring moisture, no fires to close our unit, and the hopes of drawing a tag.

Occasionally all of these things are going to line up, but you need to treat each year like they will. You need to do your preseason scouting to get the most out of that tag when it does come. 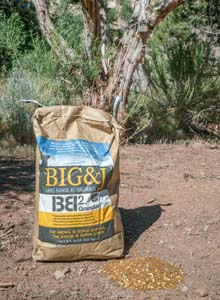 One of the very best ways to do that is to utilize trail cameras and some sort of attractant. What is meant by an attractant is either minerals which are essential to antler growth and something the deer and elk crave during this time-frame. Trophy Rock is a great source of these minerals, but I have found that Big & J’s BB2 is one of the best attractants I’ve ever used over the years. You will need to check your state's regulations for the use of all of these different products. If you are just using these products to attract animals during the off season and to get an inventory of the animals in your area there are few states with restrictions. Most of the restrictions come into play when you are going to hunt over these spots that you have been putting out minerals.

I like the BB2 a lot because it has a strong smell to it and will allow you to draw animals off of the beaten path. Since I do the majority of my personal hunting on public land and we seem to have a bunch of thieves in today's outdoor world, I like to get my trail cameras away from high traffic areas. Due to the scent put off by the BB2, I can put a pile 100 yards off a main trail or water source which they will likely catch the scent of and go investigate. Once you get them there once, they will continue to come back time and time again to get these minerals their body craves. You are aiding heavily in their antler growth as well. 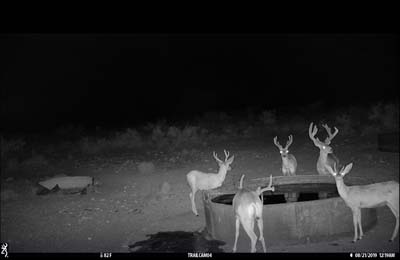 The next aspect of capturing this is to have a quality trail camera that will get you the pictures you need. A visit to Sportsman’s Warehouse trail camera aisle will show you a vast number of options to choose from and over the years, we have had the pleasure of trying the majority of them. However, each year they make new models and we don’t purchase every model. For the past 3-4 years, we have had great performance out of the Browning series of cameras. This includes the Strike Force and Dark Ops models, of which we have dozens of units in the field every year. These are in the Sub Micro Series, which means that they are relatively small in size and you can load up numerous units, lock boxes, and BB2 and head to the hills. 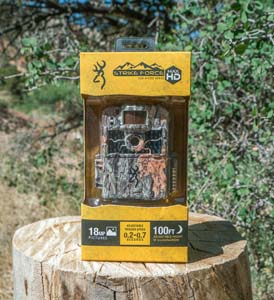 The Strike Force Max HD has IR illumination and works out to 100 feet. We have tested this and can validate that it not only meets this stated range but 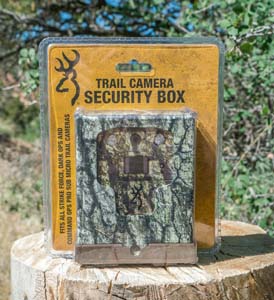 also exceeds it. The IR glow does have a tendency of attracting bears and we have lost a few camera lenses over the years due to an aggressive bruin. I do recommend a security box for this specific reason, but also due to thieves. I have installed trail cameras all over the west on public land and have unfortunately lost cameras to thieves in every single state. I carry a cordless drill with an extra battery as well as 4-5” long lag bolts to put up my lock boxes.

The Dark Ops Max HD is a black out invisible type of IR which gives you ranges to 80 feet. The pictures at 80 feet aren’t as good as I would like, but at 70 feet they are excellent and I don’t have to worry about the bears seeing the glow. These also make for 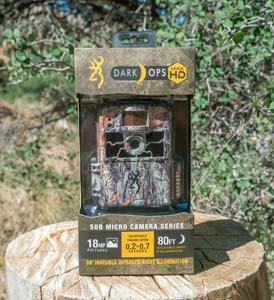 really good security cameras as they don’t have any sort of flash or light indicators of being there. 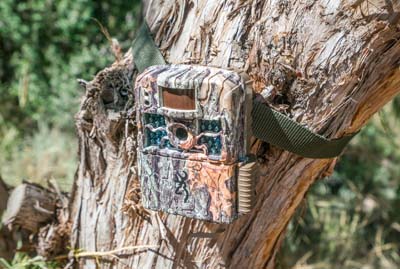 Both of these cameras are basically the same platform other than that. They will shoot HD video at 1600X900 without sound for up to two minutes. If you utilize the largest SD card of 512MB, you will be able to visit your cameras just a few times during the summer to swap out cards and replenish batteries and BB2. It works off of six AA batteries and I’ve been able to get over 12,000 photos with a set up of batteries even though the box claims 10,000. There are four different picture resolutions to choose from for each and I tend to just use the lowest as I’m just getting inventory and I want my cameras to be able to function for a month or two without me having to visit them. You can also adjust the trigger speeds on these cameras from two tenths of a second out to seven tenths of a second. Since I usually have most of my cameras on a pile of BB2 or water holes, I keep the trigger speed to the longer period of time and this gets me more photos for the batteries. The picture info bar gives you time and date stamp as well as moon phase, barometric pressure, temperature, and your identified camera ID. This is a great resource if you build a log of specific animals to see when they are moving the most and to help you pattern them to hopefully put a tag on them.Browning currently has a new wireless camera that allows you to utilize either Verizon or AT&T cellular service. This is a great resource when you are talking about putting cameras in another state that would take a full weekend to go check as well as plenty of gas money. Since we have had such great luck with the Browning Trail Cameras, we are very optimistic about this new model. We are currently testing one of these models and will share feedback on our social media platforms as soon as we have a full sixty days of evaluation.

Best of luck this fall and enjoy the scouting.