How far can you shoot? That question seems to have replaced, “How much ya bench?” as the measure of one’s manliness. Stop by a shooting range or sporting goods store and you will hear that question, followed by guys trying to one-up each other with stories of their manly marksmanship. If you are new to shooting or aren’t up to speed on the newest gear, you may feel inferior listening to these tales of glory. You may begin to question your equipment and be tempted to spend your kid’s college fund on a rifle that you think will pump up your game. It’s okay. I’ve been there. But let me tell you a little secret- 90% of these guys are just blowing hot air. Another secret for you is that the majority of rifles can outperform their shooters. Even the one you currently own. If you truly want to become a better marksman, follow the steps below and you will be on your way. 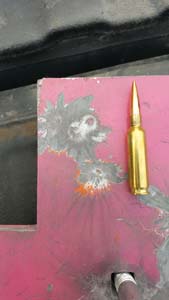 A practice session where I shot a 4 shot group on the 4"x4" head section of my steel target. It was a goal that I had to shoot a sub-minute group at 500 yards with that particular rifle and as you can see, I achieved that goal.

Step 1: Know Your Goals
Having a goal in mind will help you focus your training. If you are only comfortable taking shots on big game at 200-yards, a good goal to strive for is doubling that distance. Even if you don’t achieve it, being able to stretch to 300-yards will feel like a big accomplishment.

Step 2: Know Your Limitations
There are many limitations to address when shooting at longer distances. If your goal is ethical kills on big game at 400-yards, a limitation could possibly be the caliber of rifle you shoot. When it comes to shooting animals, retained energy and reliable bullet expansion are a must. The bullet needs to have enough energy to cause the trauma necessary for a clean kill. If your rifle of choice is a .223, a clean and ethical kill on an elk at 400-yards is very unlikely, simply because it does not have enough energy.

If the caliber of your rifle is appropriate for your goal, the optics may be the next limitation you encounter. With the 400-yard goal in mind, a standard duplex would make it difficult to compensate for bullet drop. A Mill-dot or MOA reticle would give you better reference points for aiming out to 400-yards. If your goal is to accurately shoot out to 1,000-yards, a scope with repeatable turrets is a must.

Step 3: Know Your Ammunition
It is very common for a person to purchase whatever ammunition is on sale and take it to the field. Often times, they don’t recheck their zero or how consistent the ammunition is in their rifle. In order to shoot extended distances accurately, consistency is the name of the game. Pair your rifle with ammunition it can shoot consistent groups with. Sometimes you have to try several different bullet weights and brands to find what works. Once you find the right load, stay with it. Any changes will cause loss of consistency and affect your down-range performance.

Step 4: Know Your Zero
No matter what optics you use, knowing your zero is paramount in long-range marksmanship. I can’t count the number of guys that say they sight their rifle in 2-inches high at 100-yards, which puts them close at 200. That is not a zero. At best that is a guess. Depending on the rifle, 2” high at 100-yards could be zero at 150- or 250-yards. In order for your rifle to be correctly zeroed, you must shoot it at that distance. If your rifle is not accurate enough to group consistently at your intended zero, move closer. There is nothing wrong with a 100-yard zero. In fact, many accomplished long-range shooters prefer a 100-yard zero because it allows them to be very precise.

Step 5: Know Your Drop
Whether using holdover or dialing turrets for each shot, knowing what your bullet is going to do before the shot takes place is the bread and butter of long-range shooting. There are a couple of methods that can be used to acquire this information, ranging from shooting at known distances and measuring the drop, to using a ballistics calculator to mathematically calculate it for you. The ballistics calculator is by far the most accurate way because you can input real-time data, like environmental conditions and have a reliable solution calculated for you. This works by saving your sight-in data (zero distance, environmental conditions, bullet data, etc.) to the calculator and then inputting real time data. The calculator figures the differences between the two and comes up with a solution. The known distance measurement is less accurate, but out to 500-yards or so one can be successful with it. It involves shooting at targets at known distances and measuring the distance between point of aim and point of impact. Once you have that info, you simply dial that amount or hold over that much more. 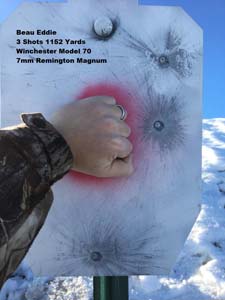 A group shot by a former student and now my business partner, Beau Eddie, after a year of solid practice. He is using a factory rifle and some hand loaded ammunition.

Step 6: Know Yourself
You know better than anybody your capabilities. You know your strengths and weaknesses. This step involves taking a good look in the mirror and being honest with yourself. If you can recognize areas in your ability that need improvement, identifying them and working on them will most definitely make you a better shooter. If you are one of the many shooters that suffer from a flinch, doing dry-fire drills will help you overcome this bad habit. I like to use the method of five good dry fires to one live fire. So, at the range, set up your rifle as you normally would. Find the target in the crosshair and remain steady on it. Then, make a good, smooth trigger pull. If your crosshairs remain centered on the target after the dry fire, do it again. If you can do five good pulls in a row, do a live fire. Few people are manly enough to recognize their own weaknesses. Even fewer will work on them. If you want to surpass the blow hard group, this kind of training will make that happen.

These steps are the foundation to better marksmanship. I own a shooting school in eastern Idaho and specialize in helping people improve their skills with their existing equipment. In teaching these principals, I have seen shooters over the course of two days double their effective range. Recently, I coached a 12-year-old boy on how to apply these steps and by the end of the day, he had a one shot hit on a 12”x 16” target at 545-yards. That’s not to say this is his new effective hunting range, but practicing at longer distances gives confidence to shots at practical distances. 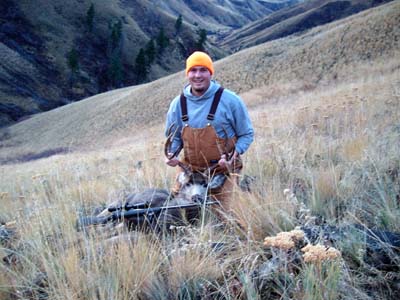 The Hells Canyon Mule Deer. I shot him after 9 months of serious preparation. Though the shot wasn't far (468 yards) it was the best reward for my offseason practice. One shot dumped him.

I want to give one last piece of advice. Many people pull their rifle out in September, shoot a couple of rounds to check zero and then go hunting. I strongly disagree with this mentality. Good marksmanship takes practice and that means taking time throughout the year to work on it. If you make time, even one weekend a month, to shoot with a focused goal, it will pay off in the long run. These tips may not help your story telling skills at the range, but they will definitely make you a better shooter.

About the Author: JR Grotjohn has been in the shooting business for 15 years with an emphasis in teaching rifle marksmanship for the last 5. In high school he worked for Defensive Edge Inc. They specialize in building long range rifles. This company is responsible for the .338 Edge, .338 Terminator, and the .260 Terminator. After high school he joined the United States Marine Corps as an infantryman. He was injured in training and received a medical discharge. After the Marines, he worked for Rogue Rifle Company as a machinist, building rimfire rifles. At this time he began competing in local benchrest, silhouette, GSSF, and CMP competitions. In 2012 JR started his own gunsmithing business where he does repairs and machine work and teaching people the principals needed to extend effective shooting distance. With his business partner, Beau Eddie, he started Down Range Precision. This is a rifle school with the mission of teaching people how to get the most out of their own equipment. They do group classes as well as one on one instruction. You can reach him at downrangeprecision@gmail.com, phone: (208) 791-6424, www.downrangeprecision.net.