The saying goes “big fish are where you find them”.  What then, is the secret to finding big fish?

First decide what species that you want to pursue. Second, start looking for areas that consistently produce big fish for the best chance at finding your trophy.
For instance, if I wanted to catch large cutthroat trout, I would enter “giant cutthroat trout” on a Google image search.

Almost every big cutthroat picture that comes up on the Google search is at Pyramid Lake in Nevada. Naturally, I would start my search for when, where and how to catch these fish.

YouTube can be very educational as well. There is a YouTube video titled “Pyramid Lake Oct Nov Dec 2016”. 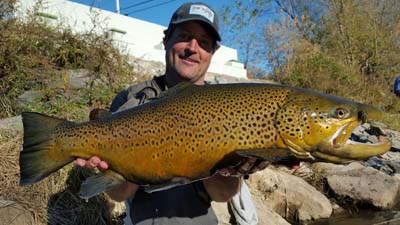 The video gives away the timing in the title and with the help of Google Earth, one can figure out the beaches where many of these monster Lahonton’s were caught.
That’s not all you need. You also need to know what flies the fish are taking. Google is your friend again. Enter Pyramid Lake fly patterns on images. There you will find Pyramid Lake staple patterns of black or white buggers, popcorn beetles and tadpoles. One will find various nymphs that work too.

You might think you are ready now, but I don’t think you are quite there yet. Look closely at the pictures and videos of the giant trout again. What was the weather like? Was the wind blowing? Was it low light? Was it sunny? Was the water clear or murky? Fishing during prime-time is very important. The fish might be in shallow water just a short time during the day. Knowing that keeps you fishing when you should be. Think you got it figured out? Wait, what are those ladders in many of the pictures for? Oh! You stand on the ladders to stay close to the drop off’s in the lake while fishing. Do I need one of those? Better do some more research.260. Watch the websites like www.PyramidLakeFlyfishing, which gives fishing reports along with pictures. Join Pyramid Lake fly fishing groups on Facebook to see pics of recent caught fish. Pay attention to the details in the pictures. 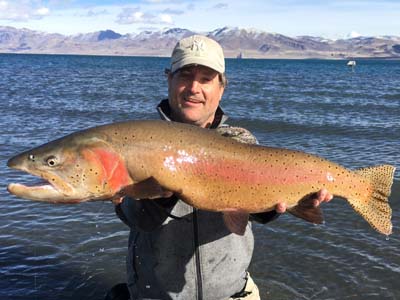 Now you might be ready to try out the salty water of Pyramid Lake, pursuing giant cutthroats. Don’t be surprised if you don’t get a giant your very first trip. You may have to pay your dues. Your odds are so much better and the learning curve will be much shorter because you did adequate research. When you get there, watch successful fisherman, including their fly colors, retrieve speeds and are they nymphing or stripping?

Shall we try the same formula again on a different kind of trout? Brown trout grow very large and are good fly rod fodder. Let’s Google giant brown trout. I see browns from a lot of different places, including Milwaukee Harbor, New York, Montana, the White River in Arkansas, New Zealand and Tierra Del Fuego. Which location makes the most sense to a fly fisherman? 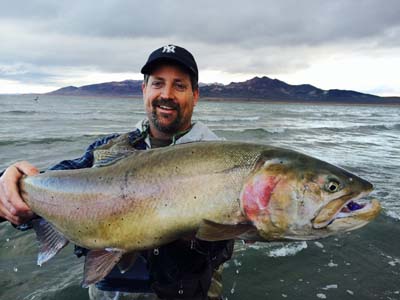 Let’s go to YouTube again. Milwaukee seems to produce the most really large browns, but it doesn’t seem very fly rod friendly. If I were ice fishing, it would be a no brainier. New York seems to produce a lot of large fly rod caught fish, with the drawback being it’s pretty crowded. Montana produces some good browns, but not a ton of huge fish. It is very fly rod friendly though and uncrowded. The White River in Arkansas produces some very large browns and is fly rod friendly, but not consistent enough. New Zealand is cost prohibitive and not consistent enough on very large fish, unless you helicopter fish to your location daily. Tierra Del Fuego is a dream destination, but I can’t afford $8,000 a week. It looks like New York is my best bet for large fish at an affordable price. Let’s do some research on upstate New York.

The largest and most consistent brown trout action is out of Lake Ontario, between Buffalo and Pulaski. Doing more research on websites and YouTube, I discover mid to late October, November and to mid-December are the best months as the trout move out of Lake Ontario looking to spawn. Popular rivers are Oak Orchard Creek, 18 Mile Creek at Burt Dam, Oswego River and the Salmon River. Popular fly patterns found on the internet imitate king salmon eggs, stonefly nymphs, Estaz flies, crystal meth and copper johns. Upon further research, I see 7- and 8-weights are the norm on fly rods. Use fluorocarbon tippets to increase hookups, sometimes down to 4x. 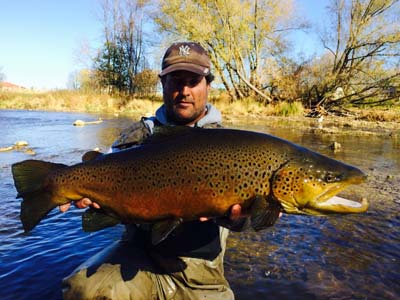 After following the formula for finding large trout and applying it to rainbow/steelhead, I find there are several locations to investigate. Jurassic Lake in Argentina looks like the place to go if it didn’t cost $5,000 a week. The world record rainbow came from Saskatoon, Canada and many giant rainbows are caught there. If I was down for throwing chunks of dead fish in the dead of night below Lake Diefenbaker that would be ok. I might be considered a snob, but I want to get my fish on a fly imitation. What about the tributaries to Lake Erie. There are many good fly fishing streams from Ohio to New York, but the steelhead are only running 4-8 lbs with a 10 pounder being a monster.

Big steelhead are caught in British Columbia, Oregon and Washington. All of these locations would be a good choice, but I’m not sure if I would have great odds of catching a very large fish at these locales in just a one week trip. The Situk River in Alaska on the other hand produces many big fish in a single day on average. The flight to Yakutat is long and kind of expensive, but worth it as the river is manageable, floatable and has a great run of steelhead. Yes, that seems to be the wise choice. In fact, that is why I wrote this article, to try and win the trip to Yakutat to catch some big steelhead.

But to tell you the truth, I think my big trout formula can be applied to most any species.

I am constantly looking for patterns and principles that can be consistently applied, or that can be applied across multiple species, locations or conditions...

The midsummer bite for many species is not exactly ideal. Many taper off their time on the water right now. Fine with me, but it doesn’t need to be that way....

Fishing
Outdoor Activity in the Era of Social Distancing

If you’re like most of us outdoorsy people, you’re undoubtedly feeling the cabin fever pretty strongly right now. It’s spring, we’re supposed to be out there...