MVT - it’s kind of like MVP only different, a little less animated, yet equally important to the success of the team. You can probably guess that the “MV” part of the acronym is Most Valuable -but what is the “T”? This is a fishing column; it stands for Tackle of course. Fishing isn’t commonly a team sport so you, dearest angler, are the only player and your team is comprised of your tackle. Just in case it might help a few of you with your tackle buying decisions, let’s take a look at the tackle combo most useful to our 2017 success in both guiding and filming a full season of Fishful Thinker TV.

Without question, the single most valuable tool we had for the entire year, regardless of species or location, was a “soft plastic” three-inch minnow body. The reason I put soft plastic in quotation marks is because in many cases the minnow body was not plastic at all, instead made out of a water-based resin and impregnated with amino acid-rich liquid - yep, I’m talking Gulp! The 3” Gulp! Minnow has won the MVT award since I first fished pre-production prototypes back in the early 2000’s and it seems every year I lean on this humble, inexpensive and unassuming little bait, more and more. Why? Simple, it catches fish, all kinds of fish large or small, in all kinds of situations, fresh or saltwater. Big fish eat little fish and the 3” minnow body is the most versatile “little fish” you can cast.

The cases where we did not use the Gulp! Minnow, we used a brand new, just hitting the market, Powerbait MaxScent Flatnose Minnow. We started using them in the spring as pre-production models and were immediately impressed. It’s more durable than Gulp! because it is made of PVC instead of resin. The trick is that the PVC is extremely porous in its make-up, allowing it to absorb Gulp!-like liquid for scent and flavor - aka MaxScent. I suspect that Flat Nose Minnow will challenge the mighty little Gulp! Minnow for 2018 supremacy based on durability alone.

For the record, a large part of the versatility of this style of plastic body is that it can be fished on a jighead, dropshot rig, split-shot rig or even threaded on a hook cast on fly tackle. Also works great under ice. Later in the season we finally got our hands-on Berkley’s new Snap Jig, a jighead with a built clear glide wing built in, which proved to be especially effective when paired with the Flatnose Minnow, snapped aggressively and then allowed to glide down on semi-slack line. The minnow style of body accompanies us on every single trip, regardless of species or location, wherever legal.

I guess it stands as no surprise given the effectiveness of the various minnow bodied rigs, but the reel MVT goes to the Abu Garcia Revo Rocket 30. The Rocket’s performance advantage revolves around the fact that it recovers about 37” of line per revolution of the reel handle (depending on reel size). That allows us to get tight on fish biting on slack or semi-slack line as they most often do when fishing jigs. We missed fewer bites and lost fewer fish on this reel than other spinners. It also gets my lure back very quickly when I’m done with a retrieve, allowing more casts per day. I used the Rocket for nearly all of our finesse fishing and the real bonus occurs in rivers; the super-fast retrieve speed is excellent for maintaining line and lure control in fast moving water. It goes without saying that the bail and drag are superb as well. 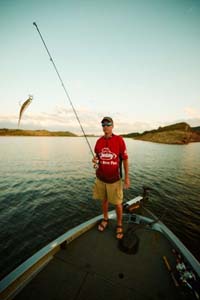 Pairing the Rocket and Gulp! Minnow with a St Croix worthy of of MVT status was easy; I chose the 6’9” medium light power, extra fast action for finesse stuff and feel that the Avid X line of rods represents the best value when considering performance vs. cost. Don’t get me wrong, I dearly love the Legend Elite and Xtreme rods, but the Avid X is a very solid performer for a fraction of the cost, allowing me to carry it in more crazy places (think nasty riverside hiking, kayaks and stand-up paddleboards) without worry of loss or damage. This mindset results in more catching, earning the MVT status.

The last part of my finesse system that earned MVT status this year is of course the line and I really struggled with choosing one, because the results were sooo close. In the end, I have to give the award to 8# NanoFil, though 100% Trilene Fluorocarbon XL was a very close second. The NanoFil took the title for the same reasons as the others; versatility. Given the wide range of rigging options for the Gulp! or Flatnose Minnow, the line needs to be equally versatile and the NanoFil edged out the fluoro because I prefer it when drop-shotting, snap jigging around weed growth or in running water. NanoFil casts better on spinning tackle than any line out there, bar none, doesn’t mind line twist and cuts current very well due to its thin diameter. Great stuff.

Given the amount and range of fishing we do, combined with variety of tackle on hand, MVT status is a legit tackle honor. Consider assembling an MVT combo in some version yourself. I’m pretty sure the fish will be very unhappy that you did!

This gives you GPS loaded with detailed topographic maps for navigation and the ability to stay in contact with anyone back home from anywhere on the planet ...

The Outdoor Edge Razor Safe replaceable blade system gives you the same ease of use in a fixed blade model and have the ability to quickly swap between blades.