“The Other White Meat” 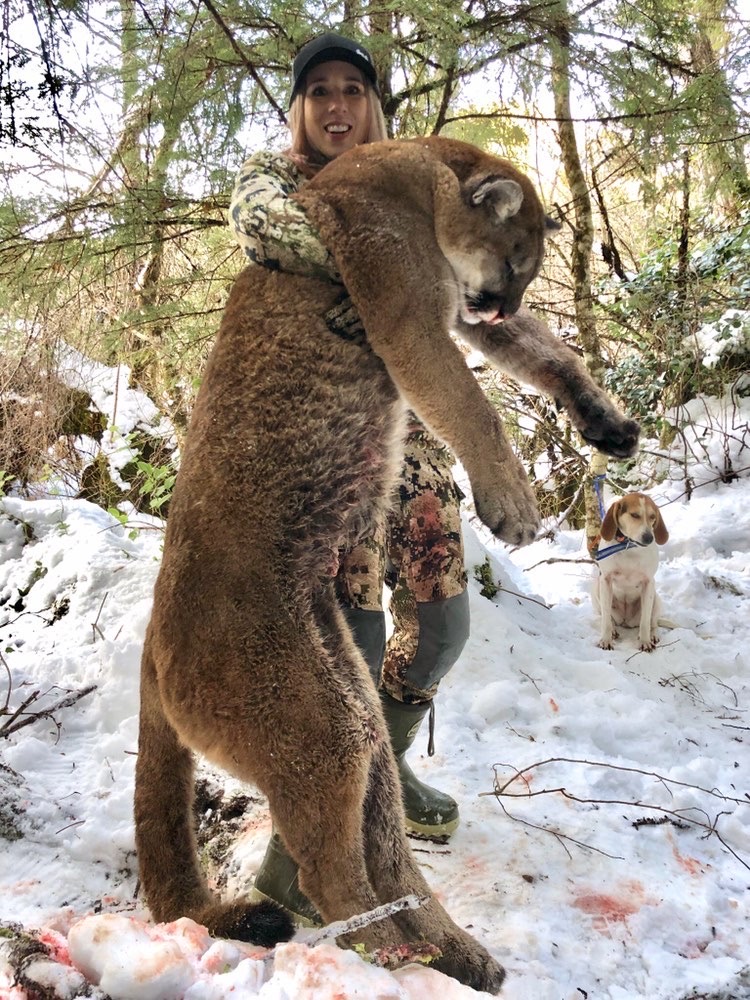 “When are we going to hunt her?” @daniela_s0

“Was hoping the cat got you” @southjerseyclassic

“I really hope you get caught by one of these and they use your filthy blood to feed their babies. The world would be a better place.” @alejandroosorios

I prefer to eat food that is free-range and organic, which is one of the many reasons I hunt. The environmental and health benefits of living off the land in a sustainable way are incredible, and I enjoy sharing my stories and harvests in the hopes of encouraging others to do the same. In the past few years of posting hunting photos on Instagram, I have received more than my fair share of hate and attacks from people who don’t agree with (or understand) my lifestyle; but few things bring out anti-hunting comments and vicious personal attacks like photos of harvested predators, specifically wild cats. As demonstrated on a recent Sportsman’s Warehouse post showcasing a harvested cougar, not only do anti-hunters come out in droves, wild feline harvests are a subject where hunters themselves seem to be divided. Hunters of more common animals such as deer or elk will sometimes double-down on wild cat hunts because they view them as a less ethical harvest – either because hounds are sometimes used (and there is an impression that it becomes an easy harvest, which is incorrect), and/or because of the false assumption that the meat isn’t used.

“Your [sic] not eating that cat. People eat them? Always figured it was just for fun.” @salmindeer 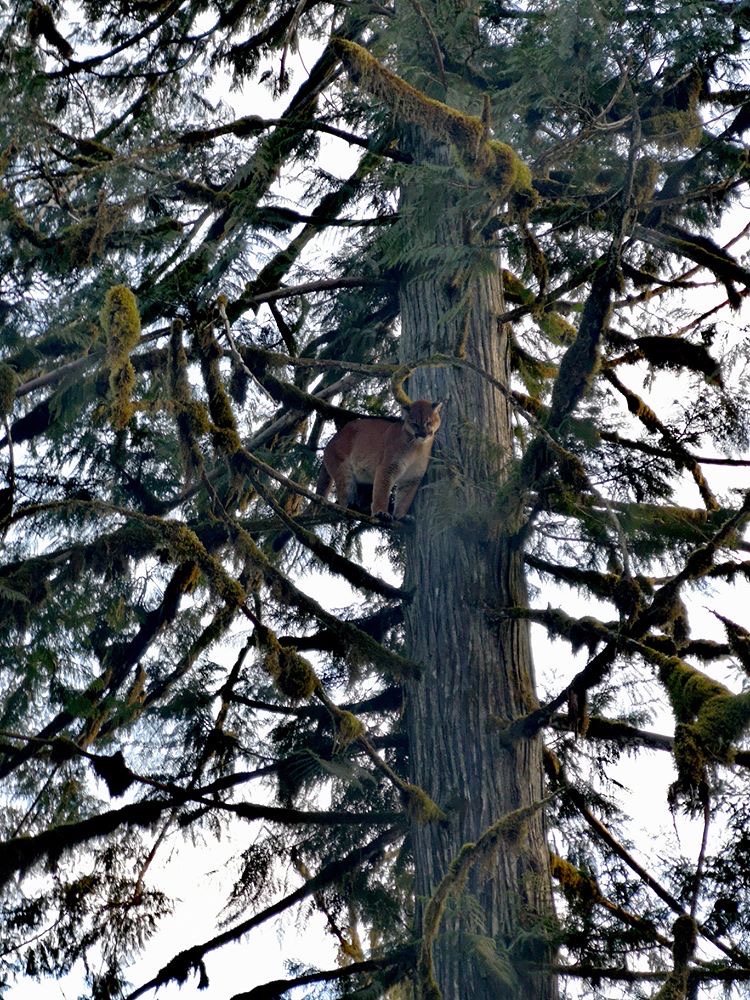 My mountain lion (cougar) hunt was on Vancouver Island, where they are so plentiful that residents are allowed to harvest two each per year in an effort to protect ungulate populations. On my hunt with Sean Lingl of Canadian Guide Outfitters, we followed the tom’s tracks on foot and in vehicle for three days. Any time we got to an area with a lot of different tracks, we were able to pick up the target cougar’s tracks because of the size, and he had an extra toe/growth on his foot that left a very distinct track. We passed several sites where cougars had killed animals including rare elk and even cougar kittens. On the day of the harvest, after covering over 25 miles on the hunt, we had boxed in an area of about 500 yards by 200 yards where there was an “in” track, but no “out” track. At that point we determined the tom was in that area and we let out the hounds. I never imagined how much those pooches would love the chase. They live for it and it makes their day when you send them to do their work. Within five minutes the cougar had gone up a tree. When cougars go up trees they can get super comfortable – even falling asleep up there. After I harvested the 180-lb. cougar, it was a lot of work to drag and carry the entire carcass out of the woods through the deep snow. 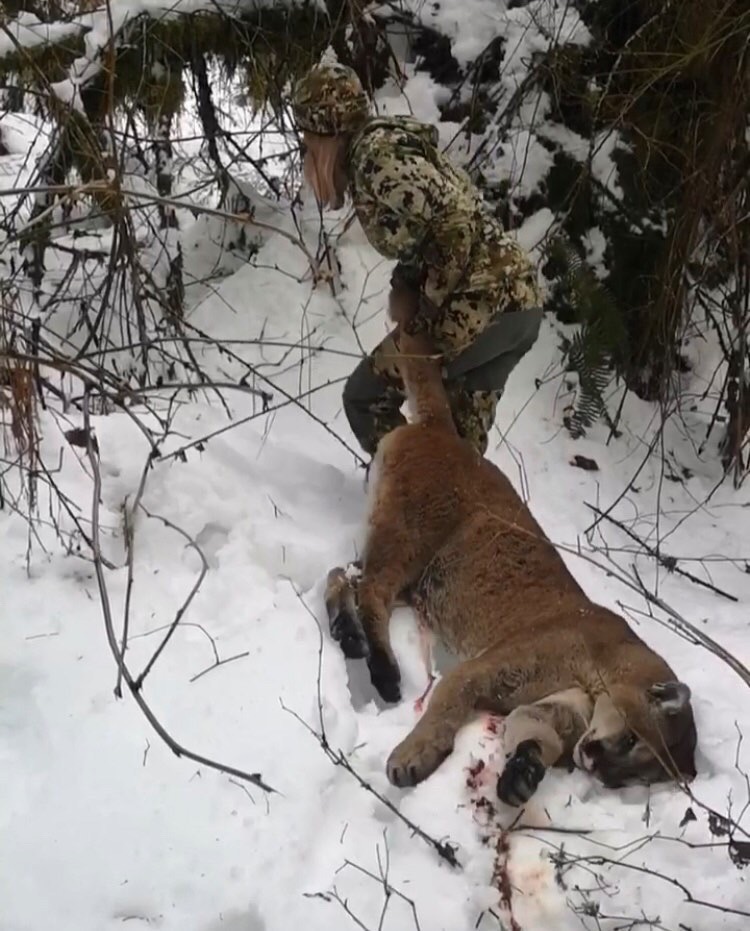 In British Columbia, where I harvested my cougar, the province has a rule that the entire animal must be brought back to camp. No gutting or skinning is permitted in the woods. This is to encourage full utilization of the animal, primarily meat consumption. This is a regulation I like, as it might make someone consider consuming the meat even if they hadn’t planned on it. Once someone tries their cougar meat though, I can almost guarantee that they won’t need a law to encourage them to eat any future cougar harvests. It’s just THAT GOOD.

Mountain lion meat sometimes has a stigma attached to it, whether it’s because it’s a cat, or because it’s a predator and by default the meat gets a bad reputation. I’ve eaten black bear my entire life so the predator stigma didn’t deter me, but I had heard negative rumblings about the meat and was unsure of what to expect. The mountain lion didn’t have the most pleasant smell during the skinning and butchering process (to be frank, it stank), so I was unsure about how the whole experience was going to turn out. 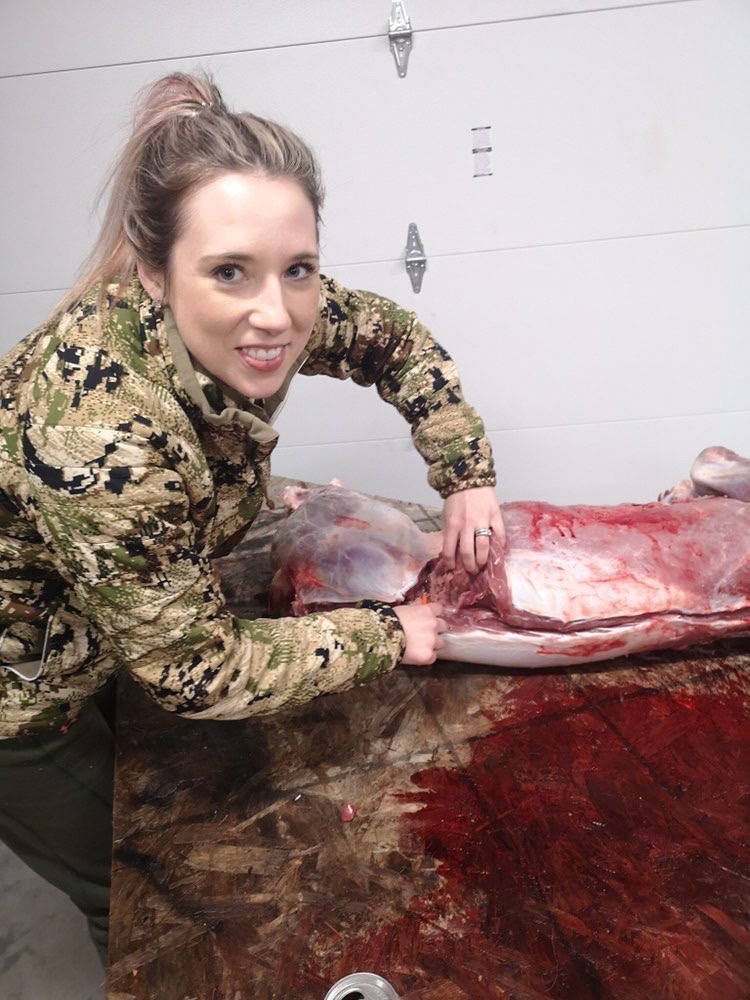 Nevertheless, when I got home with the meat I did a post asking for recipes, and to my surprise the suggestions flooded in. They ranged from people saying to marinate the meat overnight in milk to reduce any strong taste, to making curries. Some recommended cooking it in sweet and sour sauce, and others said to make cougar pepperoni. All of these ways sounded intriguing and tasty, but for my first experience trying the meat I went with a basic approach to really appreciate (I hoped) the flavors and textures of the protein. It was a decision that paid off. It was so good that I haven’t felt the need to prepare it any other way. It’s very mild, incredibly flavorful, and simply delicious. It’s as close to pork tenderloin as you can possibly get, and in my opinion it tastes even better than pork. 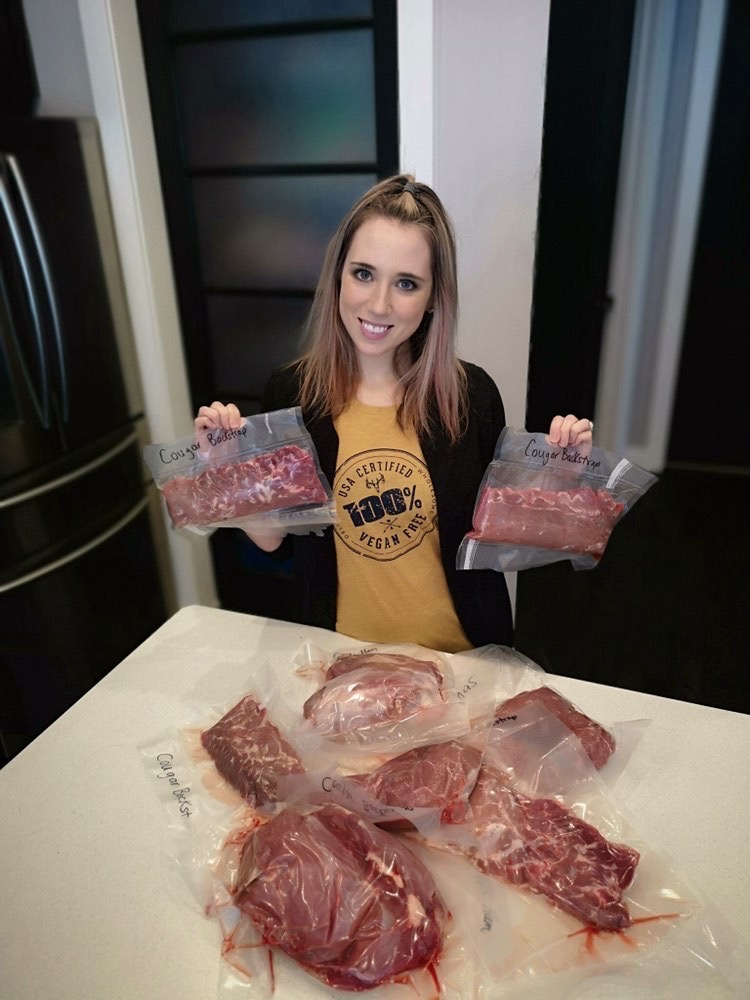 I have shared the meat with friends and family who wouldn’t otherwise get the opportunity to try it and they were all pleasantly surprised. It’s a hit every time I serve it, and we all now understand why cougar is often referred to as “the other white meat”. I’ve eaten wild game on several continents, and from a wide variety of animal types and mountain lion tops the list for me. If you ever get the chance to try it, jump at the opportunity. You won’t be disappointed.

Here is my simple recipe for mountain lion backstrap:

When cooked according to this recipe, the meat goes well with rice and steamed/grilled vegetables. Mountain lion can also be substituted for pork in almost any recipe, keeping in mind that it’s leaner, so slight modifications may be required to ensure the meat doesn’t dry out. I’d love to hear if you like the recipe or if you have any others to share. 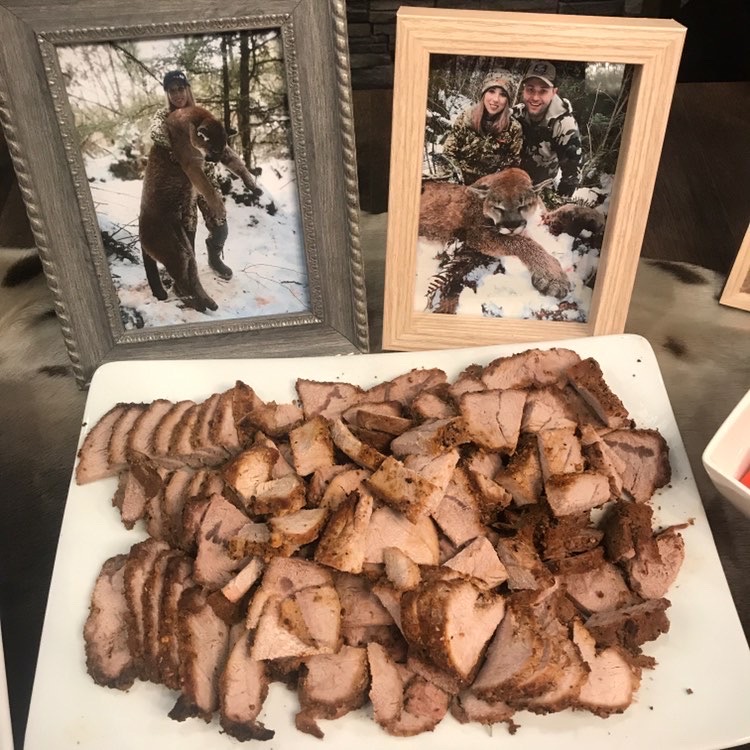 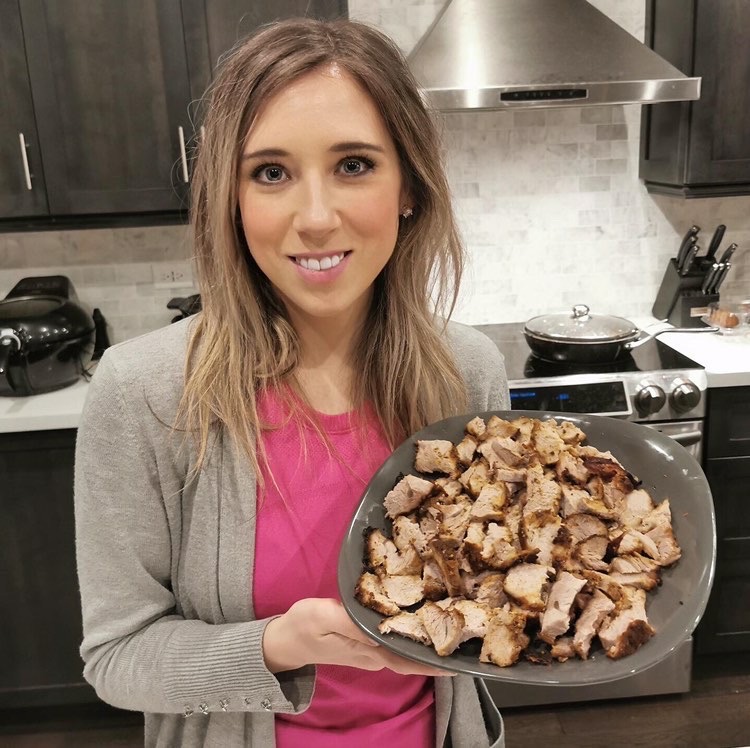 I prefer to eat food that is free-range and organic, which is one of the many reasons I hunt. The environmental and health benefits of living off the land in a sustainable way are incredible, and I enjoy sharing my stories and harvests in the hopes of encouraging others to do the same.

For those of you that have not tried plank cooking…try this! This cooking technique is really easy and there is no mess but a smoldered plank when you are done.

Backstraps are special. It is a very good friend that will part with some hard-earned backstrap and just give it to you. If you are a non-hunter you will ...

Check out this new printable "Ultimate Guidebook for Camp Oven Cooking" from Lodge. It has everything you need to know to master your next outdoor cooking ...