A Dozen Deers and Beers

By Gary Lewis and Mark Knowles

My first mule deer I took with an arrow. The second fell to a bolt-action .243. We had both deer in the freezer at the same time and I noticed a difference in taste between the one that ate mountain browse and the other that subsisted on sage, ceanothus, and bitterbrush.

Deer meat was an acquired taste. If I was going to hunt it, I was going to eat it and like it. My wife wanted to like it because our grocery bill (perceived) was greatly reduced by a surplus of neatly wrapped, hormone-free, butcher-papered packages stenciled with fancy words like backstrap, tenderloin, and flank steak. 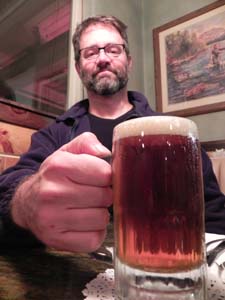 We like to cut our deer to 1/2-inch steaks and serve it different ways. Sometimes it goes down fried in flour and wrapped in bacon. Other times we soak the deer in a marinade for 24 to 48 hours. Our favorite marinade is made of Bragg’s Amino Acids, balsamic vinegar, olive oil, beef broth, garlic, salt, and pepper.

To celebrate a hunt, a hunter sometimes tips back a cold one, but there are many choices in craft brews. How does a person choose a beer to serve with mule deer or blacktail?

Start with where the deer was from. What was it eating? 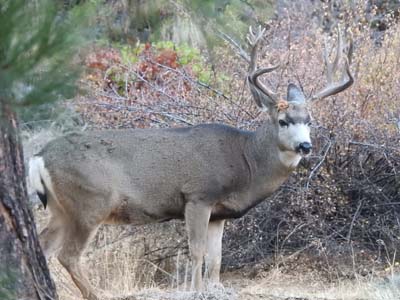 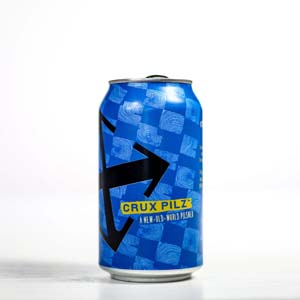 A buck taken up on the shoulder of the Cascades, from the Upper Deschutes and Metolius units will have a milder flavor than a buck from the desert. Pair it with Crux Pilz for its sense of grains, grasses, herbs, and hint of lemon. 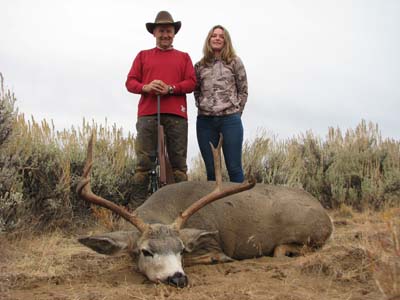 Eastern Oregon High Desert Buck
Way out in eastern Oregon, on the high benches of the Imnaha and in the breaks of the Snake River, the mule deer make their living on forbs and the new growth on twiggy browse. Then, when the summer sun cooks down the tender shoots and the weeds stop growing, the deer tend to focus on bitterbrush, sage, ceanothus, grasses and lichens. With no marinade, but accented with a little Montreal Steak Seasoning, the steak has a delicate flavor. 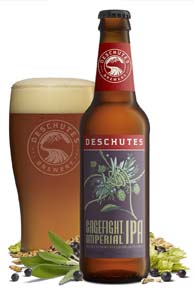 The pairing is SageFight with a hint of citrus, sage, and juniper berries. Its dry and bitter finish is a good complement to a mule deer from Imna’s Land. 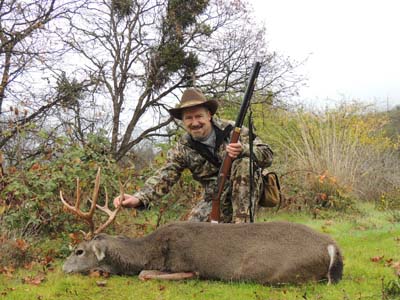 Western Oregon Blacktail
On the fifth day, a buck scent-checked the odor of doe-in-heat scent I’d smeared on fence posts and bushes. At 39 yards, he stopped. At the shot, he plunged away and came to rest in the blackberries. In agricultural land, this buck had grown up eating apples, pears, blackberries every fall, while eating mushrooms, lichens, forbs, vine maples, and grasses in the spring. 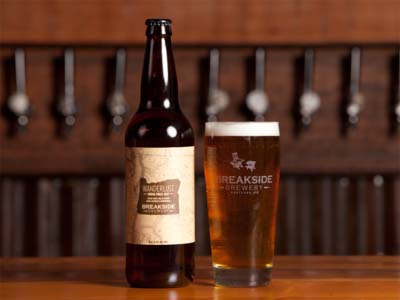 The upfront bitterness of the Wanderlust IPA with a citrus element contrasts with the gentle flavor of the homegrown blacktail venison - golden in color like the antlers of a lowland buck. 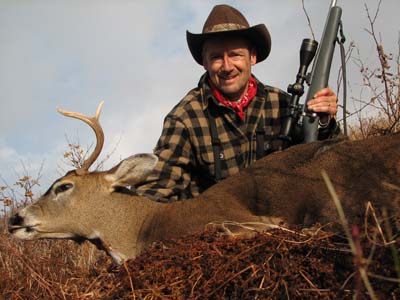 Kodiak Island Sitka Blacktail
A blacktail deer’s home range does not take in much real estate, but on Kodiak Island, the Sitka blacktail can range from 4,000 feet above sea level in the summer time to sea level when the snows deepen in November and December. Rich in organic litter, the soil of the island is infused with volcanic ash, most recently from the 1912 eruption of Mt. Novarupta. A Sitka blacktail is flavored with ocean kelp and cottonwood, Kenai birch, alder, willow, salmonberry, and elderberry. 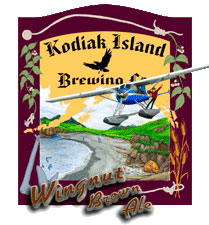 On a hunt on Kodiak, we like to say, “Something brown is going down.” And that’s what we’re thinking when we pour a Wing-Nut Brown. This is a nice beer to finish a meal of one of the best-tasting venisons in the world. 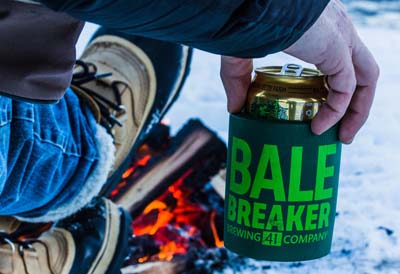 Western Washington
From the valley floors around Olympia, out to the coast and up the flanks of the Cascades, black-tailed deer are surrounded by a wealth of forbs and browse, which give the meat a gentle complexity. In riparian areas, they feed on willow, salmonberry, blackberry, and cascara. Up on the slopes, the same deer might find serviceberry, red alder and, out in old burns, the red huckleberry. Springtime might find it munching on Oregon grape, dandelion, and clover. If the deer walks out on an ocean beach, it will leave its tracks around fresh kelp which will finish its flavor in a unique way.

Cut through the thin cap of foam on a Bale Breaker High Camp Imperial Rye IPA and it reveals a hint of grapefruit before it mellows to a sour, lingering, dry finish. 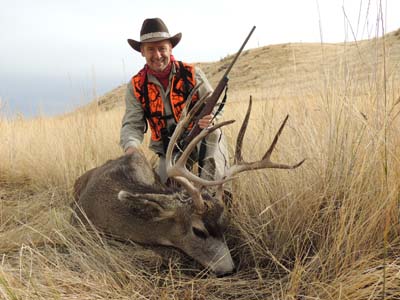 Eastern Washington Palouse Mule Deer
Out in the Palouse, deer find bitterbrush and rabbitbrush, on those long, windswept plains, they subsist on winter wheat, wheatgrass, bluegrass, and oats. Balsamroot, prickly lettuce, small burnette, and clover are the forbs they rely on.

Ground with an 8 percent beef fat, the meat has a milder flavor than that of sagebrush mule deer. It calls for pairing with a copper-colored ale with fruit and citrus hints.

Idaho Gospel Hump Wilderness Mule Deer
High in the Salmon River watershed, mule deer live in alpine, sub-alpine and forest environments, migrating all the way down to the riverbanks when the snow is deep mid-winter. In the high country they feed on forbs, mushrooms, and grasses early in the summer time then switch to bitterbrush, snowbrush, and willows. When snow is deep and food is scarce, they nibble at lichens and branches unreachable at other times of the year. This too is a classic mule deer taste with perhaps more flavor than the inexperienced palate can appreciate.

Harsh to smooth. That’s how this pairing finishes - a great complement to this mountain mule deer. Piney scents and mild herbals. In a can, this would be a good one to pack in the saddlebags.

Eastern Montana Mule Deer
In the spring, deer seek out prickly pear, white and purple prairie clover, phlox, coneflower, sunflower, Echinacea, and other forbs. In the summer deer find groundcover like bearberry and Oregon grape. Shrubs like serviceberry, curlleaf mountain mahogany, American plum, chokecherry, and snowberry offer good eating in summer and fall. Wherever deer eat this well, they acquire the complex and varying tastes in the venison. A classic pairing is Custer’s Last Stout.

An oatmeal stout, it starts with a malt sweetness, exudes coffee and chocolate then disappears like the sound of a bugle at dawn. Drink it after dinner with all your friends around you and don’t leave anything in the glass. 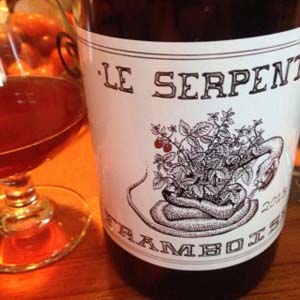 Eastern Wyoming Mule Deer
Out on the east side of Wyoming, hunters find mule deer in stands of junipers and aspens and in sagebrush draws. In spring they feed on succulent, nutritious forbs like fireweed, dandelion, and clover, adding grasses and shrubs in late spring. Over the summer, as grasses dry out, they shift to a diet of twiggy shrubs like curlleaf mountain mahogany, antelope bitterbrush, sagebrush, rabbitbrush, willows, and buffaloberry. If they have the opportunity, they feed on crops like alfalfa.

If you can find this deep dark red Belgian sour ale, sip it sparingly between mouthfuls of venison. The nose is raspberry with hints of vanilla and French oak from the barrel. 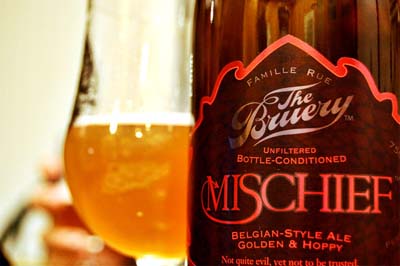 D-Zone California Mule Deer
Archery deer seasons start early in California. A D-Zone tag might find the bowhunter up close to timberline, a mile from the nearest road or hiking trail. At this time of year, the water sources are the key to success. Here, the deer feed on broad-leafed herbaceous plants, shrubs like wedgeleaf ceanothus and manzanita, acorns, grasses, and groundcovers. When the tag is filled, there will be a long pack back to the truck and that’s the time to start planning the barbecue.

Cook it S-L-O-W 'til the meat falls off the bone. Pull it apart and apply a liberal dose of a good barbecue sauce. There’s only one reason to have coleslaw - put it right on top of the pulled BBQ venison and finish your meal with a citrusy, resiny, fruity Belgian like Mischief by The Bruery made (like your deer) in California. 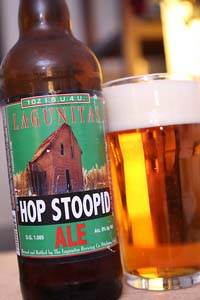 Central California Coastal Blacktail
Its habitat ranges from the coastal plains near Santa Barbara north and east out to the western slope of the Cascades from the Cascade-Sierra Nevada Range and out into the Sierra Nevada foothills where it mixes with mule deer.

This is dry country, much of it still in the grip of a tremendous drought. The deer thrive in oak savannah, chaparral, blackberries, and poison oak. Their diet is heavy in acorns, twiggy browse, weeds, grasses, and mushrooms.
Try this deer - unmarinated - with an accent like Justy’s Jelly Pineapple Jalapeno and a bitter then sweet double IPA like Lagunitas’ Hop Stoopid. 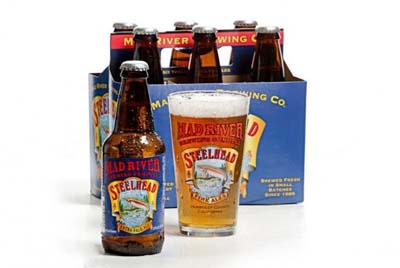 Ruby Mountains Mule Deer
The summit of Ruby Dome reaches to 11,387 feet and the mountains range south-southwest for about 80 miles. Scoured by glaciers, the minerals feed the antlers of the region’s mule deer.

Brewed at the same latitude, ten hours drive to the west, an APA like the Steelhead Extra Pale Ale is our pairing. Figure this beer with mule deer tacos, cheddar cheese, shredded lettuce, O’Hana salsa and lime.

In the glass it pours with a golden haze and finishes with notes of citrus and pine that recall dry Ruby winds on long afternoons.