It’s that time of year, when winter is inching closer to spring and it’s time for spring snow goose hunting. Spring snows are a tough breed; they are on the move and they are usually in big numbers, with lots of eyes noticing EVERYTHING below them. Being at the right place at the right time, with the right equipment can make the difference between hunting and just bird watching.

Scouting
So you’re convinced that you’re going to do some hunting this spring, but where do you start? If you live in one of the central states that is part of the spring conservation season, hunting will probably be within striking distance. If not, it depends on when you want to go hunting. If you’re window for hunting is February, you may want to consider Illinois, Missouri, Kansas, Colorado or Nebraska. There may be hunting found further south or in the extreme eastern or western portions of the flyways, but these are the most popular and reliable for a migration. As March closes in, you’ll want to focus on Iowa, Nebraska, South Dakota and North Dakota. Many years, Missouri, Kansas and even Illinois will be rolling well into March because of a Mother Nature delay. When April arrives, it’s pretty spotty in the states, with typically only South Dakota or North Dakota with huntable numbers. If you’re willing, Saskatchewan and Manitoba offer fantastic opportunities late in the spring.

If you’ve limited your search to one state at one time of the year, you’ll want to leave your schedule as open as possible. Mother nature usually determines when and where the snow geese are, so be careful when making commitments months ahead of time. If you do some google searches, you’ll find that most state wildlife agencies will have migration reports on their websites. That is usually some of the most factual information out there. Don’t be afraid to call the agency just prior to your trip. I’ve found most conservation officers and biologists are willing to spend some time with you on the phone to answer questions. Federal biologists follow the migration north and if anyone would know where to be; it’s them. Also, be prepared to do some reading on migration reports by other hunters. 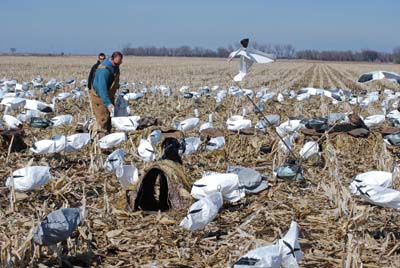 Decoys
Your confidence level will go up as you expand your snow goose spread. If you don’t own any decoys and are looking to amass a snow goose decoy spread, there are many things to consider. Most importantly; what is your budget, how much do you plan on hunting snows and are you the type who likes to “do-it-yourself”? For those who want to put the time in, you can make homemade snow goose decoys or floater decoys for a reasonable price. If you have the time and ambition, there’s no end to how big your spread can get. But, if you only expect to spend a handful of days afield each year, it doesn’t make sense to have a large decoy spread that collects dust. In that case, learn how to build your decoys like windsocks or buy as many decoys as you can for what you can afford. You can buy Texas Rags for very cheap, but don’t expect them to last more than a couple seasons.

If you plan on hunting snows for many years to come, you may want to buy quality instead of quantity, with a plan to build your spread every year or when you can afford it. This is what I’ve been doing over the past decade. Decoys such as full bodies, custom windsocks or Sillosocks are the most commonly used, but you have a wide option of shells, silhouettes and other various decoys available.

Everyone will have a different opinion as to how many decoys you should use, but if you’re on a budget, you have to think small and buy or build smart. I spend most of my time hunting over a spread between 500 to 1500 decoys, but I’ve had great success from as little as a hundred. So, with that being said, don’t be afraid to experiment with various decoy setups. There are times where any decoys will do - just be there at the right time. And there are times when the small things such as spread size, movement, and concealment can make or break your day.

There are really three basic setups that are used for spring snow goose hunting: field spreads, water spreads and a combination of the two. Field spreads are the most common, with the focus on setting up your decoys in the feed field the geese are using. They typically are used for birds staging in your area, but some days you’ll also decoy a lot of migrating birds.

Water spreads are setup to attract migrating birds. You’re trying to tell the incoming geese that it’s safe to roost or loaf here. You’ll want to use these setups on nice weather days with south winds. Avoid these setups with strong north winds, low clouds and with extreme cold temperatures.

The last setup involves combining a field and water spread. These are my favorite to hunt, when the right factors come together. Sometimes we’ll use a pasture with a shallow slough to attract birds. We’re not offering food, but a safe place to rest. Another option is a feed field that runs up to a potential roosting body of water. My ideal setup is a vast cornfield with a large, shallow body of water in the middle with minimal to no surrounding vegetation. This spread is great for attracting migrating flocks as well as local, hungry birds.

E-caller
I don’t recommend starting off anyone in spring snow goose hunting without an e-caller. There is no doubt in my mind that it makes a difference and the louder/clearer the sound, the better off you’ll be. For the guy looking to spend a handful of days afield, this may be a tough investment to make. But have no fear, there are many options to approach this decision.

If you’re looking to buy, you’ll want to decide between tape or CD. Tape e-callers are generally cheaper and durable, but they don’t offer the sound quality of CD’s. For CD e-callers, you’ll want to consider a unit such as the GooseGetter or anything that will be loud and clear enough to be heard at long distances.

You can build the world’s greatest e-caller, but it’s useless unless you have a good tape or CD of snow goose sounds to back it up. I have had the best experience with the sound files that combine a large flock of geese, various lone “barks” and deep grunts and murmurs they produce while feeding. When you can combine a great sounding e-caller with a good sound file, you’ll have the best weapon in the field for snow geese.

There are a few other things you’ll want to consider before setting foot in the field such as concealment and how to get your gear into the field. When it’s all added up, don’t slack on the time spent on concealment. Snow geese have very good vision and are notorious for frustrating even the most experienced snow goose hunter.

You’ll want to have camouflage that will match your surroundings or invest in one of the various hunting blinds on the market. Pay close attention to proper camouflaging of your blind. If you’re on a budget, you can simply invest in a pair of white coveralls. I bought a few sets of these that painters use for a few bucks each and it’s a wise investment to make. Laying in whites is an old tactic and is still used today.

If you’re hunting in an area that has wet fields that you can’t drive into, you’ll need to consider how you’re going to get all of your gear into your decoying location. If you own an ATV, then this task is easy, but if you don’t, you’ll want to look into a sled. If you own a portable ice house, you can use this sled for this purpose as well.

These are some ideas that will help you get started on hunting snows. By becoming a snow goose hunter, you’re entering a “hidden fraternity” in the outdoors. It’s an addiction that can cost you lots of money, time and sleep. Snow geese are the most challenging birds to hunt in my opinion, hands down. I find myself learning every time I go out and you will too.