Adventure On A Budget: Downtown Ducks

Wet Wilderness Offers Hunting in the Shadow of Mobile

Practically in the shadow of downtown Mobile, Alabama, waterfowlers can hunt a vast wet wilderness. Second in size only to the Mississippi for North American river deltas, the Mobile-Tensaw Delta spreads across about 250,000 acres of swamps, marshes and waterways between the Mobile and Tensaw Rivers. These rivers further subdivide into myriad other streams, lakes and waters surrounded by wetlands. 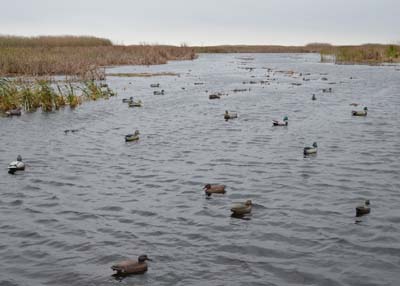 The Upper Delta
“The Upper Delta mainly has wood ducks, but sportsmen can get some other ducks that pass through or stop in some of the ponds,” explained Thomas Harms, an Alabama Division of Wildlife and Freshwater Fisheries biologist in Spanish Fort. “Some delta ponds can only be reached by walking so they don’t get much hunting pressure. The area also has many private ponds next to the delta. These ponds can hold ducks in the area. Mifflin Lake, Alligator Lake and Fisher Lake are also pretty good areas. Any of the small creeks might hold some ducks.”

The Upper Delta WMA remains open for waterfowl hunting every day of the season until 1 p.m. The season opens on Nov. 24-25 and then again from Dec. 2 through Jan. 28, 2018. However, the WMA closes for other types of hunting during firearms, dog and primitive weapons deer hunts. Check the WMA permit for specific dates. 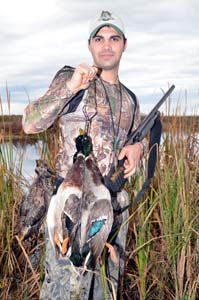 Daniel Felsher shows off some mixed ducks he killed.

The Lower Delta
Most waterfowlers head to the Mobile-Tensaw Delta-W. L. Holland WMA, also known as the Lower Delta. In these marshes, sloughs, bays and ponds, waterfowlers might bag just about any duck that winters along the Gulf Coast, but the bag mostly contains gadwalls and green-winged teal. Occasionally, sportsmen shoot a few pintails, wigeon, ring-necked ducks, scaup and other species.

“The Lower Delta has a ton of gadwalls and a lot of teal,” Harms advised. “Chacaloochee Bay is a good spot as is Bay John near Meaher State Park. Polecat Bay and Delvan Bay are also good areas to look for ducks. Big Bateau Bay is another great spot, especially since the new rules about limiting motors in certain areas went into effect. Since we put the motor restriction in place, Big Bateau Bay and the Apalachee Refuge are holding a lot more ducks in the area.”

Before the 2016-17 season, the state created the Waterfowl Management Zone. In the zone, which includes Big Bateau Bay, boaters cannot operate any gasoline-powered motors during the fall and winter. People can still hunt Big Bateau by poling, paddling or running an electric motor to their spots. 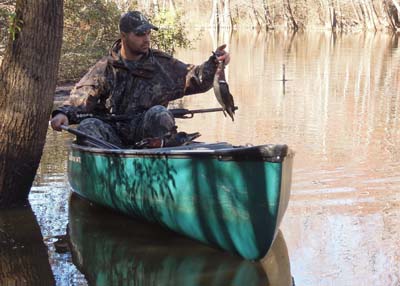 Daniel Felsher retrieves other drake wood duck he shot while hunting in the Mobile-Tensaw Delta near Mobile, Ala.

The state also created the 210-acre Apalachee Refuge, a triangular waterfowl sanctuary between I-10 and the Mobile Causeway at the southern edge of the Lower Delta, west of the Apalachee River. In this sanctuary, people cannot hunt nor operate gasoline-powered motors. In addition, people cannot hunt on Mondays and Tuesdays from the CSX Railroad south to I-10 and must stop waterfowl hunting every other day by 1 p.m. throughout the WMA.

“I was glad when they made that rule change in the Lower Delta,” commented Cody Young, a waterfowler. “That gives birds a little place to rest. That’s key to keeping ducks in an area. If they are getting harassed every day, they leave.”

To hunt the WMAs, sportsmen need to buy a state hunting license, plus state and federal migratory bird stamps. In addition, they need to purchase an Alabama Wildlife Management Area license, good for all WMAs in the state. See www.outdooralabama.com/hunting-license. They must also obtain a free map and permit for each WMA they plan to hunt, available to download off the internet at www.outdooralabama.com/wildlife-management-areas. 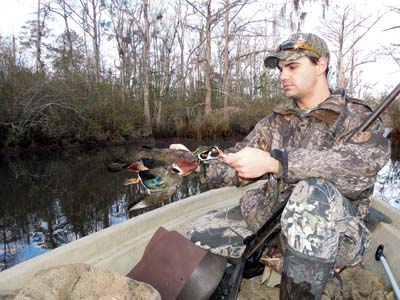 A beautiful drake wood duck taken while hunting in the Mobile-Tensaw River Delta near Mobile, Ala.

More Public Hunting Spots
When pressure grows too intense for ducks in the delta, they commonly fly to the open waters of Mobile Bay or Mississippi Sound, part of the Gulf of Mexico. Mobile Bay covers 413 square miles and measures about 31 miles long by 24 miles at its maximum width. Since navigable waters belong to the public, sportsmen can hunt practically all open waters in the bay or sound.

South of I-10, sportsmen can hunt ducks all day long every day of the season. In the open waters, sportsmen usually kill redheads, canvasbacks and scaup, but they might occasionally down a few green-winged teal, gadwall, perhaps even pintail and other puddle ducks.

“I’ve hunted divers in the bay and had good success,” Young recalled. “It’s a completely different type of hunting than looking for puddlers in the marsh. Don’t try to set-up right where a large group of birds wants to sit. I like to get between two large groups of birds and pick off singles, pairs and small groups flying back and forth between the two big concentrations.”

While in the Area
Being close to a major city, southern Alabama offers practically any type of dining, lodging or entertainment one might desire. Several excellent restaurants along the Causeway prepare tasty fresh seafood. Many people camp or rent cabins at Meaher State Park (www.alapark.com/meaher-state-park) right on the Causeway. Across U.S. 98 from the park, area visitors might tour the Five Rivers Delta Resource Center, an 80-acre complex set aside for outdoor education and recreation. See www.outdooralabama.com/5-rivers-alabamas-delta-resource-center.