Alaska is definitely one of those places that dreams are made of. I can’t think of a better place to visit if you are looking for beautiful surroundings and plenty of sites, along with, of course, some of the most outstanding fishing opportunities available anywhere in the world.

To be honest, if you are thinking of an Alaska trip and you have never traveled there before, if fishing is what you are looking for, I would highly recommend staying at a lodge that includes a guided fishing package. Expecting to go to Alaska, cold turkey and catch fish after fish like your friends have told you they did on their last trip just isn’t going to happen if you don’t know the ins and outs of the areas and the fisheries.

But, for the person that likes getting out on their own, exploring new waters and wetting a line as little or as much in a day as they want, well once you learn the ropes, more power to you.

This article is centered around one of the most accessible areas of Alaska, the Kenai Peninsula. A flight into Anchorage and then a stop at the rental car counter can have you on your way to some outstanding fishing in a matter of a couple of hours.

I like to base myself in the Soldotna area, as it is pretty centrally located to all of the following areas. Stand-alone accommodations are available, as well as camping areas for those that like to rough it a little extra. Grocery stores and sit-down and fast food establishments are plentiful and there is even a conveniently located Sportsman’s Warehouse in the middle of town that can supply you with just about everything you will need for a successful stay.

The following are just a few of the best places to visit if you are looking to catch some fish in the Kenai River area. There are plenty of other great spots as well and once you have ventured there a couple of times, I am sure you will be able to add to the list.

Kenai and Russian River Confluence
The Russian river is a clear stream flowing from Upper Russian Lake, through Lower Russian Lake and then emptying into the Kenai River at mile marker 55 on the Sterling Highway. The famous Kenai/Russian River Ferry is located at the confluence of the rivers to carry fishermen to what is perhaps the busiest fishing spot in Alaska.

There are two distinct sockeye runs that return to this area. The early run usually arrives by June 15th, with the second or “late-run” fish usually arriving in mid-July. The second run has a much larger number of fish making it into the system through the Kenai (over a million annually), but only about 60,000 make it into the Russian River. This is why the confluence is such a popular place during June and July each summer.

Many people also visit this area to see the Russian River Falls and Weir – watching and photographing the thousands of salmon leap the falls on their upstream migration. Between watching the fish and watching the fisherman, well, let’s just say your day can be chock full of excitement!

Much of this area is designated as ‘fly fishing only’. Now in this case, I like the action of a fly rod in fishing for sockeye myself, but you gain a lot of leverage when using a conventional rod and reel, which is legal in this case as long as you are still using the same weight and fly setup. Sockeye are pelagic and feed on plankton and other organisms. When they are swimming upstream, theirs mouths are continuously opening and closing to capture those organisms, hence the terms “lining or flossing” come into play when fishing for them. If you can figure out the right amount of weight to put on your line to get you in the zone, when you feel your line stop, set the hook and hold on for dear life! And, oh by the way, only fish caught around the mouth can be retained. All others must be immediately released. 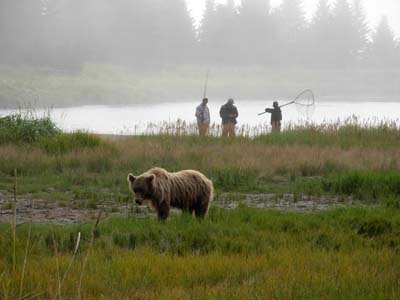 Ninilchik River
The regulations and seasons for this fishery are very complex and often change, so be sure to obtain a Cook Inlet Sport Fishing Regulation Summary and read it closely. In fact, always make sure to watch for ‘Emergency Orders’ enacted by the Alaska Department of Fish and Game that can affect many waters in the area throughout the season.

Although best known for the excellent halibut fishing and clam digging nearby, the Ninilchik River supports a very good king salmon fishery in May and June, as well as a silver run in August. The rivers’ returning kings are pretty well protected, with a limited number of days each year open to fishermen because of pressure and the rivers’ small flows. Fishing is limited to the lower two miles of the river, although most anglers fish well below this point, with maybe its most popular stretch in the boat basin right at the river’s mouth.

August sees a fair return of silver’s, with fly fishermen doing well with bunny leaches and conventional tackle guys throwing spinners or a glob of eggs (roe) under a bobber. Make sure you watch the tides when you are visiting this area, as the best fishing will be just prior to and just after high tide.

Deep Creek
Mention the phrase ‘Deep Creek’ and most Kenai Peninsula anglers conjure up dreams of big Alaskan halibut. But to small stream anglers, ‘Deep Creek’ has a whole other meaning. Located just to the south of the town of Ninilchik, Alaska, Deep Creek is perhaps the most popular of the three southern streams of the Kenai Peninsula.

With two State of Alaska Recreation area accesses, the lower end of this river is quite accessible to bank anglers.

The creek’s mouth (although named a ‘creek’, Deep Creek actually is larger than the Ninilchik River) is a popular launch site for the Deep Creek halibut fleet as well as private boats wishing to fish for halibut or partake in the offshore king fishery.

Supporting a hatchery-enhanced natural run of king salmon, the river also offers a shot at pink and silver salmon later in the summer months. Deep Creek also provides a fine Dolly Varden fishery for both resident and anadromous varieties, although the sea-run is more prevalent.

Eggs, spoons, and spinners all are effective on each of the salmon species, as well as the dollies.

As with the Ninilchik River, Deep Creek is open for king salmon fishing on Memorial Day weekend and the following two weekends (remember, weekends are: Saturday, Sunday, and Monday).

After the king season closure, Deep Creek re-opens for dollies on the first of July - later in July pinks and then silvers return. Deep Creek also hosts a small run of native steelhead, sometimes surprising anglers later in the year. 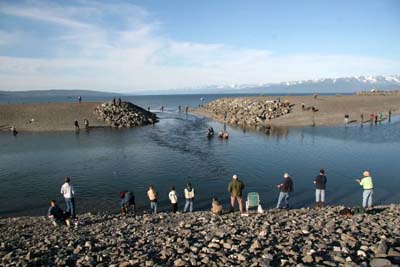 Homer Spit Enhancement Lagoon
What do you get when you dig a large man-made pool on the end of Alaska’s Homer Spit and then plant it with a decent run of Alaskan king salmon in addition to silver and pink salmon? In no sense of the word, a true Alaska wilderness experience; the ‘Spit Lagoon’ or ‘Fishing Hole’ is one of the most unique recreational salmon fisheries available to anglers anywhere!

A ‘terminal fishery’ in the truest sense, the returning salmon have no place to spawn - good news for anglers, bad news for the fish. Nearly all of the returning fish are available for sport harvest, as only a small fraction is needed for an egg take to continue the stocking program run by the Alaska Department of Fish and Game.

Most years, anywhere from 3,000 - 6,000 kings are caught in this fishery. Similar to the run timing on other peninsula king salmon fisheries, the run gets going in the latter half of May and peaks in mid-June, with kings available through July.

The pink salmon fishery is primarily a July and early August show. Weighing in from 3-5 pounds, the pinks are far and away the easiest of the salmon to catch, making them a favorite of young anglers. As the pinks’ numbers begin to dwindle, the Coho show up in force and provide anglers with a whole new round of fishing for silver salmon that average about 7-10 pounds through the month of August into early September.

Spoons, spinners and eggs fished solo or under a bobber are all popular offerings to all of the returning salmon. Even if you choose to not participate in the fishery, it’s a good show to watch and a nice way to spend an afternoon enjoying lunch and the most southern tip of the Kenai Peninsula.

As I mentioned earlier, if you are looking for a host of opportunities and the scenery to match, the Kenai Peninsula is at the top of the list. Now as far as an adventure on a budget, the remoteness of Alaska will definitely add a few dollars to your total bill, but if you do it right and scrimp a little on the extravagant luxuries to enhance the necessities, there is truly no place in the world better if you are looking to fulfill your fishing adventure dreams.