Adventure On A Budget: Southern Traditions

With tails wagging frantically, the pointing dogs raced ahead through longleaf pine savannah punctuated by majestic oaks festooned with Spanish moss. The scene looked like it should jump out of an iconic painting from the Old South.

The dogs locked up on a thick bramble patch about 40 yards away. Where dogs can run through rabbit tunnels beneath thorny vines, humans could not. Finally catching up to the dogs, one shooter took up a position to the right while another stood ready on the left as the guide sent in a cocker spaniel to flush the birds.

Moments later, eight bobwhite quail burst from the thicket and rocketed in all directions. Just as one shooter took a bead on a feathered butterball, the bird disappeared behind several pine trees. The shot pattern splattered the wood. The other hunter never fired a shot as the birds quickly sailed into another impenetrable thicket.

“That’s hunting in south Georgia,” quipped McLeod Hatcher, a guide for Wynfield Plantation near Albany. “It’s much more challenging to hunt the trees than walking a field where people get lots of open shots. In the forest, we never know when a tree might jump in the way of a good shot!”

When most upland hunters think about an old-fashioned Southern quail hunt, they naturally envision themselves following dogs through Georgia pine savannahs. The largest state in the South probably offers the best quail hunting east of the Mississippi River. In fact, the Georgia General Assembly designated the bobwhite as its official state gamebird in 1970. 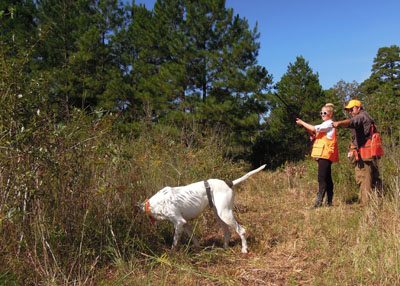 McLeod Hatcher points where he expects the quail to flush so Kristen Schuette Loflin can take the shot during a hunt on the Wynfield Plantation near Albany, Ga.

For centuries before that, gentlemen sportsmen followed enthusiastic dogs through fields and forests every autumn in pursuit of King Bob. Quail hunts became major seasonal social events as sportsmen dressed in their finest shooting jackets bragged about who had the best dogs or could shoot the straightest – until embarrassed by the next bird!

“Georgia has about 500,000 acres in private plantations intensively managed for wild quail,” explained Reggie Thackston, a Georgia Department of Natural Resources biologist. “Some plantations have been around since before the Civil War. These lands have very high wild quail populations, in some cases the highest they’ve ever had. Put the right amount of habitat in the right landscapes and the quail population will respond to it.”

“On most public areas, bobwhite quail populations are very low,” Thackston lamented. “Many areas have good quail habitat, but not in large enough areas. To support a huntable quail population, it takes considerable acreage. In a forested landscape, we want to see about 5,000 acres of good habitat, either contiguous or in close proximity where birds can fly back and forth. In a farm landscape, we need at least 3,000 acres.”

On the positive side, the state continues to improve quail habitat on several public properties including Di-Lane Plantation Wildlife Management Area. Di-Lane covers about 8,100 acres on the Georgia upper coastal plain near Waynesboro. Thick upland hardwood strands mixed with pine forests dominate about 70 percent of the property with the rest in fallow fields and pine savannahs.

“Bobwhite quail can be found throughout the state, but higher densities occur in the upper coastal plain,” advised Paul Grimes, the GDNR state quail coordinator in Waynesboro. “Upland bird hunting opportunities are available on several wildlife management areas and other public properties. Based upon our population surveys, the number one place to hunt wild quail in Georgia is Di-Lane Plantation. It’s intensively managed for birds and small game species. We also manage the harvest so it does not exceed 15 percent of the fall quail population each year.” 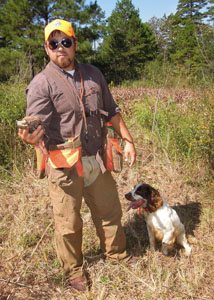 Much less mountainous, the nearby Oconee National Forest includes another 116,232 acres between Macon and Athens. Together, these forests conserve 866,468 acres. In contrast, Rhode Island covers about 776,960 acres.

“It’s pretty rugged terrain,” explained Mike Brod, a fire and natural resources officer for the Chattahoochee National Forest in Gainesville, Ga. “The Chattahoochee is dominated by upland hardwoods like oaks and poplars. In the foothills of the Appalachian Mountains, Oconee National Forest is primarily rolling piedmont with lots of pines in the uplands and hardwood in the bottoms and along the streams.”

South of Oconee NF, the Piedmont National Wildlife Refuge near Forsyth allows hunting on about 34,000 acres. The land consists primarily of upland loblolly pine forests with hardwoods lining the creeks. Refuge managers periodically burn portions of it and thin timber to enhance habitat.

With wild quail becoming difficult to find across the South, many sportsmen visit commercial shooting preserves. At a preserve, landowners manage the habitat for quail and supplement the wild bird population by periodically releasing pen-raised birds. Some preserves also offer hunting for pheasant, chukar and other birds. Many also provide food and lodging services.

“Hunting on a game preserve is a great way to introduce children or novice hunters to the shooting sports,” advised Kurt Guthrie, general manager for Wynfield Plantation. “Hunters get lots of action and don’t need to keep still and quiet for long periods.”

Throughout Georgia, sportsmen can find many outstanding shooting preserves. Some of the best quail hunting in the nation occurs near Albany. In a survey conducted by Pheasants Forever and Quail Forever, sportsmen named Albany, Ga., as the ninth best overall bird-hunting destination in the United States and the top quail hot spot.

Just outside Albany, Wynfield Plantation sits in the heart of the Plantation Trace, an area of southwestern Georgia known for its great bird hunting. A previous Orvis Lodge of the Year honoree, Wynfield Plantation covers about 2,000 acres of mostly longleaf and slash pine punctuated by occasional clearings and hardwood groves.

“We manage the property for wild bird habitat, but we also do pre-releases on the property to ensure success of our hunts,” Guthrie explained. “I watch the numbers as hunters harvest birds throughout the season and release more birds as needed. The ones we release before the season get with wild coveys and turn wild quickly. The birds fly really well. It’s more like a wild experience than hunting pen-raised birds.” 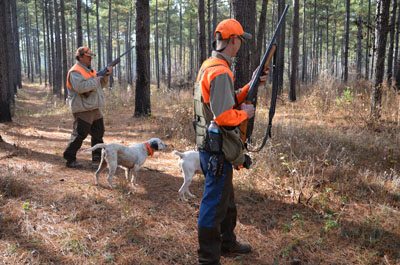 Pembroke Pope and Zac Venable wait for their dogs to point some bobwhite quail during a hunt at the Pope Plantation near Washington, Ga.

Near Washington in Wilkes County, the Pope Plantation offers hunting on 1,200 acres of mixed loblolly pines, hardwoods and fields. For five generations, the Popes put countless sportsmen on birds. The original farmhouse, built by Dr. John Hunter Pope in 1840, still exists on the property. The original 200-year-old heart pine still comprises the floors and a screened wraparound porch where visitors can sit in rocking chairs to watch the sun set behind the pecan orchard.

“The lodge was my grandfather’s house when he was 16 years old,” recalled Pembroke Pope who runs it now. “My grandfather used to grow cotton. He switched to growing pine trees, pecan trees and cattle. In 2007, we decided to turn the property into a top-notch hunting preserve. People stay at the Pope Plantation for the great atmosphere, great friends and a great time.”

On the Pope Plantation, quail hunters may choose between three hunting options ranging from easy field hunts to extremely challenging treks through pine forests. Sorghum fields typically offer the easiest shots at rising birds. Many sportsmen like to take their young children to this area. More experienced hunters typically prefer the challenge of walking through pine forests and waiting for birds to erupt from between the trees.

Sportsmen visiting Noontootla Creek Farms near Blue Ridge in the mountains of northern Georgia can opt for a cast and blast adventure, hunting birds half a day and fishing for trophy trout the other half. One of the top trophy trout streams in Georgia, Noontootla Creek runs through the 1,500-acre property and can produce some rainbows exceeding 10 pounds and very large brown trout.

“The cast and blast option is a lot of fun, but after a day walking the fields and mountains for birds and wading the creek for trout, people sleep well that night,” quipped Rob Kaser, a farm manager. “We have no wild quail coveys on the property, but our birds are very strong, good flyers. I’ve seen a few quail and pheasant long after hunting season ends. They may survive long enough to breed.”

Surrounded by the Chattahoochee National Forest and the Blue Ridge Mountains, Noontootla Creek Farms offers very challenging bird shooting in rugged country. Sportsmen can make unguided hunts with their own dogs or accompany a farm guide. Some people prefer to hunt the pine forests and valley thickets. Others choose to hunt open fields along the creek.

“It’s a rough hunt, very challenging,” said Cole Sullivan, a Noontootla guide. “We’re constantly going up and down mountains and through thickets. Hunters don’t get shots at every bird they flush and don’t hit every bird. These birds fly very well and know how to escape.”

Whether hunting public or private lands, sportsmen in Georgia should enjoy great opportunities to follow the dogs this fall, continuing a tradition stretching back centuries. It doesn’t have to cost you an arm and a leg to get out and enjoy quail hunting. Day hunts at hunting clubs, with a group of buddies, can be pretty affordable and can many times save you time and a lot of boot-miles as well.

Quail Initiative hopes to bring back the birds

“Habitat is the most limiting factor when it comes to quail,” explained Paul Grimes, a state biologist. “Quite often, when we’ve restored quail habitat, wild birds show up on their own and their numbers start improving. Fortunately in Georgia, we have a growing interest to more intensively manage some wildlife management areas to meet the demand from sportsmen for wild quail hunting on public property.”

State biologists provide technical assistance to landowners on how to create and manage quail habitat. Another part of plan involves catching wild quail with baited cage traps and releasing them in good habitat with few birds. At Di-Lane Plantation WMA, state and University of Georgia researchers attach electronic devices to released quail to study their movements.

“We’ll capture birds and put electronic telemetry devices on them for about three years,” Grimes revealed. “Ultimately, we would like to gain better insight into quail movements and survival so we can better manage quail and other species.”

As a species, quail survived predators for eons. Create good habitat and highly prolific quail will occupy it and survive.