About 25 miles east of the Texas-Louisiana line, Calcasieu Lake earned a reputation for producing outstanding speckled trout catches, but its best days could still be ahead. 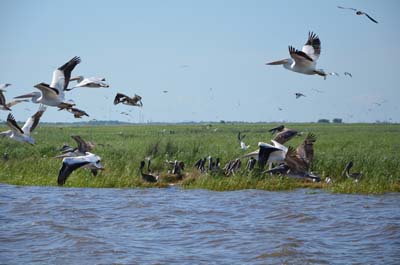 Known locally as Big Lake, the waterbody south of Lake Charles, La. measures 12 miles long by 9 miles wide and dominates the southern end of the Calcasieu Estuary. The Calcasieu Ship Channel, a 40-mile-long deeper, wider and straighter version of the old Calcasieu River course, flows through the estuary, connecting Big Lake and the Gulf of Mexico with several smaller lakes. Across the ship channel, West Cove thrusts into the marshes. Many people fish around Rabbit Island. The uninhabited marshy island also makes an excellent place to spot various nesting birds.

Like all things in nature, trout run in cycles. In the late 1990's and early 2000's, Big Lake contributed several double-digit speckled trout to the Louisiana state record book. Three remain in the top 10, including an 11.16-pounder. The lake also added three big specks to the fly-fishing category. The amazing streak of giant trout played out, but the estuary still gives up quality fish.

“We had a freeze in 1989 and for several years following that, fishing was outstanding because we had so many big trout in the lake,” recalled Jeff Poe, who runs Big Lake Guide Service (biglakeguideservice.com, 337-598-3268) on the lake with his wife Mary and son Nick. “In the winter of 2017-18, we had another freeze that killed fish. After a freeze, nature makes a big reproductive push to replace everything that was lost.”

The estuary could be on the verge of repeating that incredible whopper run of two decades ago. Nature abhors a vacuum. When something creates a void in the system, nature quickly refills it with higher reproduction rates.

“Now, we are catching piles of small trout and a few really big ones,” advised Poe, who holds the Louisiana state record for specks caught on fly tackle with a 9.31-pounder. “We caught some trout in the eight-pound range in 2019, so there’s always a possibility of catching a big one. We just haven’t seen the great numbers of really big trout like we did a few years ago. Some days, we might catch 300 undersize trout to get a limit of keepers, but that’s good for the future.”

Anglers could catch monster trout along with giant redfish, black drum, sheepshead, flounder, and other fish anywhere in the system. Full of oyster reefs, Big Lake averages less than six feet deep. Many anglers fish the reefs or watch for diving birds that could indicate schools of feeding fish.

For the best redfish and flounder action, head to the surrounding marshes. Sabine National Wildlife Refuge stretches across 125,000 acres between Calcasieu Lake and Sabine Lake on the Louisiana-Texas line. On the eastern side of the estuary, Cameron Prairie NWR and the East Cove Unit conserve more rich marshes. Several bayous flow through the marshes into Big Lake on either side of the estuary. Weirs block the mouths of some bayous to prevent excessive salt water from entering the marshes, but at times, anglers can pass through gates to fish beyond them. Even when blocked, the bayou mouths at the weirs usually provide good fishing.

“People can catch redfish along just about any grassy shoreline,” Poe explained. “Sometimes, we see big schools of reds in the middle of the lake. They can be anywhere in the system. When the wind blows too hard, we fish some protected waters in the northern part of the system and catch redfish. We had a really good flounder run in the spring of 2019, so we should catch a bunch of them this fall.”

Flounder migrate out of the marshes in the fall to spawn and spend the winter in the deep gulf waters. In the spring, they return, but some remain in the estuaries all year long. Good areas to intercept migrating flounder include the southern end of the ship channel, Oyster Bayou, mouths of marshy tributaries in Big Lake, along the channel and in West Cove. 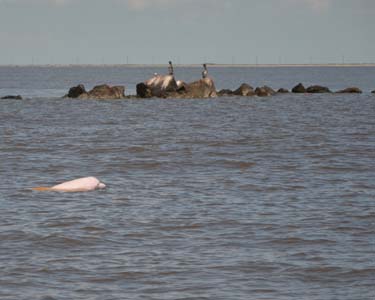 While fishing the southern end of the estuary, watch for Pinky, the famed pink dolphin. She likes to play in the bow waves of large ships running the channel between the gulf and the port of Lake Charles. 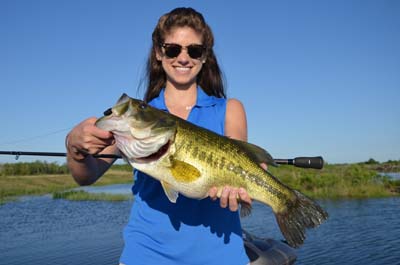 If people want a fresh change of scenery, they might want to try for largemouth bass. Grosse Savanne Lodge (www.grossesavanne.com, 337-598-2357) controls 50,000 acres of Southwest Louisiana and offers a variety of fishing and hunting opportunities. Besides guided trips on Big Lake, the lodge staff manages catch-and-release ponds stocked with bass and a 5,000-acre private marsh adjacent to Big Lake. The luxurious 15,000-square-foot lodge itself sits about 24 miles south of downtown Lake Charles and can sleep about 20 people.

“We have bass ponds up to 500 acres,” detailed Karl Zimmermann, one of the lodge managers. “The marsh is fresh on the eastern side and salty on the western side up against the lake so we have options for people who want to book a saltwater trip, a bass trip or both.”

“We have a new trophy bass lake under development and some other lakes in the works,” Tietje advised. “The new lakes only date to 2017, but we are already seeing four- and five-pound fish coming out of them. In another few years, we’ll be seeing some eight- to 10-pounders. The marsh also has premier bass fishing.”

Not far from the Grosse Savanne bass ponds, Lacassine NWR covers 34,724 acres southeast of Lake Charles near Hayes. About 16,000 of those acres encompass Lacassine Pool. The shallow impounded marsh allows public fishing from March 15 through October 15 each year. The thickly vegetated pool can produce some double-digit bass along with excellent crappie, bluegill, and redear sunfish catches. Small boats can launch into the pool, but people can also fish from the bank. 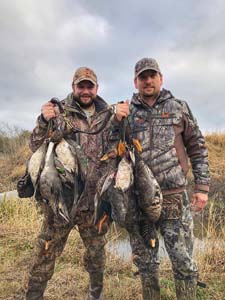 During waterfowl season, Grosse Savanne and several other lodges, including Big Lake Guide Service offer “Cast and Blast” packages. Guests hunt ducks in the morning, return to the lodge for lunch and then go fishing that afternoon.

“If someone wants to stay more than one night, we offer afternoon activities, which could include saltwater or freshwater fishing, sporting clays, afternoon goose, dove and snipe hunts,” Zimmermann said. “We also do eco-tours where we take people out for a tour through the marshes or rice fields. We have a private wading bird rookery that a lot of people enjoy seeing. We hold alligator hunts in September, but tags fill up really fast.”

Right on Calcasieu Lake, the Big Lake Guide Service Lodge offers all meals and can sleep up to 12 people. At night, people might catch large speckled trout and other fish right off the lighted dock. For other hunting and fishing opportunities, contact Calcasieu Charter Service (calcasieucharters.com, 337-598-4700) on the east side of Big Lake or Hackberry Rod and Gun (hackberryrodandgun.com, 888-762-3391) on the western side of the estuary.

In the fall and winter, Lacassine and Sabine refuges both offer public waterfowl hunting. In Southwest Louisiana, hunters mostly kill blue-winged teal during the September season. During the regular season, which usually runs from early November through late January, sportsmen typically kill green-winged teal, gadwalls, pintails, wigeons, and mallards, but the bag might include eight or nine different species on any given day. Area hunters also frequently kill specklebelly and snow geese. 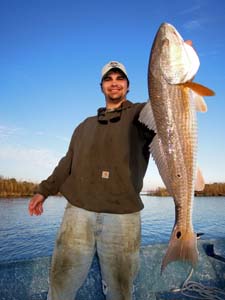 People without boats can fish off the Cameron Jetties Fishing Pier near where the Calcasieu Ship Channel flows into the Gulf of Mexico or surf-fish the beaches along the Cameron Parish coastline. Many boaters launch their craft at Calcasieu Point Landing just south of Lake Charles or into the eastern side of Big Lake at Hebert’s Marina. On the western side of the estuary, many people launch at Spicer-Hughes Marina & Motel in Hackberry. For more places to launch, see www.visitlakecharles.org/creole-nature-trail/fishing/boat-launches.

Non-residents can also buy daily licenses for $17.50 per day. Residents or non-residents who hire a licensed captain like the Poe’s can buy charter passenger licenses good for three days for $10. See www.wlf.louisiana.gov/recreational-fishing-licenses for licensing more details.

A basic non-resident hunting license costs $150 and does not include big game. For hunting waterfowl, sportsmen need a federal migratory bird stamp and a Louisiana duck stamp. Non-residents can also buy a one-day small game and migratory bird license, which includes the state waterfowl stamp, for $29. People born in Louisiana, but who now live elsewhere can buy Louisiana Native five-day hunting licenses for discounted prices if they show the vendor their Louisiana birth certificate. For more information on Louisiana hunting licenses, see www.wlf.louisiana.gov/licenses-and-permits. 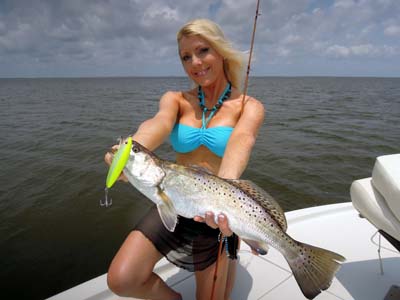 While in the Area

While visiting southwest Louisiana, take a tour of the national wildlife refuges. Sabine offers an easy walking nature trail running through the marsh. People can stay in the comfort of their cars to navigate the Pintail Wildlife Drive through Cameron Prairie or drive through nearby Lacassine. Visitors could also drive all or a portion of the 180-mile Creole Nature Trail All-American Road, one of only 43 so-designated scenic byways in the country. Depending upon the season, visitors anywhere in southwest Louisiana might spot alligators and some of more than 400 bird species that live at last part of the year in the area. The list could include various waterfowl, herons, egrets, sandhill cranes, pelicans, ibis, and pink roseate spoonbills.

Visitors might also wish to sample some local spirits at Bayou Rum (bayourum.com) made from Louisiana-grown sugarcane. Beer lovers could taste some brew at Crying Eagle Brewing (www.cryingeagle.com) or Rikenjaks Brewing (rikenjaks.com).

For more information on the area, contact the Lake Charles/Southwest Louisiana Conventions and Visitors Bureau at 1-800-456-SWLA or visit www.visitlakecharles.org.