Alaska's Boardwalk Lodge Has It All

Alaska. The 49th state of the United States, an expanded state of mind, and the stage for your next daydream that you turn into your next reality.

The magnitude, the timelessness, the thrill, the adventure, you, and wide open unpressured wild salmon and halibut. For the outdoorsman; for those still listening to the call woven into our primal DNA, Alaska speaks to those listening. Granted, not everyone is listening, as is obvious by our current culture, but you aren’t one of those not listening or you wouldn’t be reading this article. Just say it a few times out loud; “Alaska, Alaska, Alaska.” According to Wikipedia, the United States purchased Alaska from the Russian Empire on March 30, 1867, for 7.2 million U.S. dollars at approximately two cents per acre. In 1959, Alaska became the 49th state of the U.S. On our planet there are roughly 190 countries. Alaska is larger than all but 16 of those countries and is over twice the size of Texas. Only Wyoming, North Dakota, and Vermont have a smaller population than Alaska. It ranks 47th in overall population of the states, and is one of the least densely populated regions in the world.

The best news is that the Sportsman's News team knows the answers to all your questions and has invested trip after trip into this sacred land to find the business gems operating in this paradise more times than can be counted over the last 20 years.

Feel free to thank us later. Especially after you return from Alaska’s Boardwalk Lodge, as that was our most recent adventure and we are happy to report our findings. Also feel free, as well, to breathe easy when you give them a call. Maybe Google Thorne Bay just so you know where you are headed. 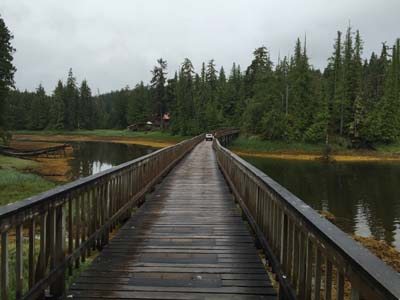 With over 1,000 feet of boardwalk, the impressive entrance to Alaska's Boardwalk Lodge is the namesake for an even more impressive lodge and fishing experience.

Gear made its way to the dock in short order and was loaded into a 4-wheeler trailer and sent off to our room before we even made it up the ramp. Smiles were everywhere, and I made a mental note of that. Having been an outfitter for over 15 years, I pay a lot of attention to smiles and to the attitudes of the staff from guides, to maintenance, to cooks, to administration personnel; as it all starts at the top “with the man himself”. It was exciting to see so many smiles. We, as humans, no matter who we are, like to be welcomed when we arrive. And while some of us could get over ourselves a little, we still like to be “kind of a big deal.” Smile. You know what I mean. Mike and I made our way across a thousand foot of boardwalk and up to the lodge. In less than an hour, we were headed after freshwater Dolly Varden and to search for a potential early silver in the river system. Prince of Whales Island is over 12,000 square miles and has a very intricate river system, and we had some exploring to do. I knew that my first cast was pounded by a Dolly Varden but Mike Deming was running the camera and I was still trying to look a little less rusty, so I downplayed the miss like a pro. Four casts later, and I was going to have to start being honest about my rust and reaction time. Deming was laughing as I finally hooked up with a 16-inch speedster and the first fish facilitated by Alaska’s Boardwalk Lodge was in hand. Roll tape and smile, which was easy since I already was. I managed to shake the rust off and landed nearly 20 underwater lightning bolts before we headed back to the lodge. 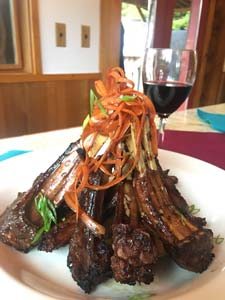 Rack of lamb, halibut steak, créme brûlée, and many other exquisite dishes were standard fare at this first-class lodge.

Communication was plentiful, and after a four-course dinner consisting of an appetizer of lamb chops; a strawberry salad; a main course of halibut steak; and a desert of créme brûlée, we were sitting down with Brad and Jay, the fishing manager, creating a game plan for the following day. The king salmon were in the saltwater inward passage and several 30-plus-inch fish had been caught by the clients that day. We moved our conversation to the hot tub and discovered that two of the guides had been with the lodge since the late 90s. There is a reason guides stay with the same operation for over 10 years. You will want to capitalize on this. 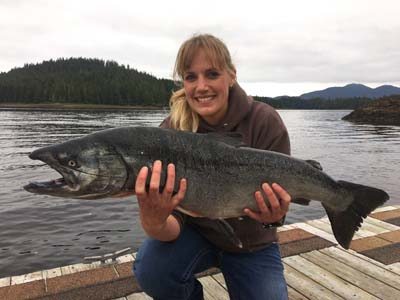 Amy is the smiling face that meets you each day at the dock and helps organize float plane transportation, flights, licensing, and trip reservations for all of the guests at Alaska's Boardwalk Lodge.

Morning came early, as it barely gets dark in Alaska this time of year, and after breakfast we were headed to the saltwater. My experience on saltwater is minimal and compounds my micromanaging controlling type-A personality. Thus, I double checked everything from a slightly hyper-diligent perspective. I am excited to report the boats were in fantastic shape, the gear was solid and reliable, and just 15 minutes after we dropped plane and the big motors throttled down, we were rigging up for giant king salmon. This is a down rigger trolling method with 12-inch flashers on double hooked herring. The ship captain, Blake, has six years of experience and moved efficiently throughout the boat. In less than 10 minutes, we had our first king salmon hooked. I could drone on and on about how much line the kings ripped through our fingers, and no doubt bore you with stories of deep running powerful fish, but I know you have heard all of that before. What I will mention, is that after our first day of king salmon fishing with Alaska’s Boardwalk Lodge, we netted 27 king salmon and those that were keepers are currently residing in freezers in the lower 48, all neatly vacuum sealed and packed, compliments of Alaska’s Boardwalk Lodge. With four other boats on the water from the lodge, the two-way radio crackled to let us know we weren’t the only ones enjoying the king salmon activity. 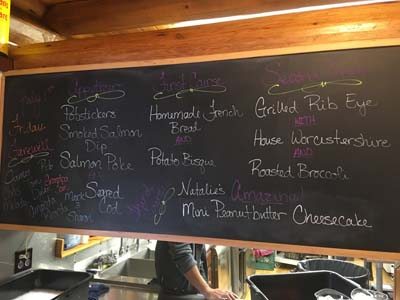 With a seasoned executive chef at the helm, it is always exciting to return to the lodge to see the menu board prior to each evening's dinner.

Is there such a thing as too many smiles? We made our way back to the lodge around 4:30 pm, and mentally prepared ourselves for way too much food, compliments of Chef Jeff who has been with the lodge for 10 years. Keep in mind, this is a very remote location and he has to skillfully order and plan meals from the middle of nowhere, and he did it flawlessly. 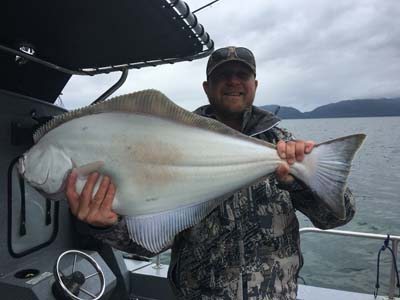 The flatfish that strolls the bottoms of the ocean in the Alaska waters, also known as the halibut. They range from 10 to over 400 pounds and it is not uncommon to catch 30+ each day.

After two successful days of fishing, one saltwater and one freshwater, it was obvious for day-three that we had choices. The option to daily fish saltwater or freshwater, sets Alaska’s Boardwalk Lodge apart. Very few lodges have this capability, so as you ask yourself your own questions, ask whether or not you want to fish both freshwater and saltwater. If the answer is, “yes I want to fish both,” then you have where to go answered as well. I like options! Deming and I chose freshwater on day-two, and were back to the rivers and freshwater with Jay, and now I had to fool two seasoned veterans that I wasn’t as slow as I really am. This is one of seven Orvis Endorsed lodges in Alaska, so I wasn’t going to be able to blame it on the lodge-supplied Orvis fly rod and reel I held in my hand. Literally, to enjoy this lodge, you only need bring your clothes. You can of course bring your very own fly rod if you prefer, but the gear line up they provide, is sufficient for the novice or all the way to the seasoned switch rod enthusiast. Stories of 30-inch steelhead were in the air as I landed another Dolly Varden, a sockeye broke the surface and I focused on where he splashed for 10 minutes with no results other than three more Dolly Varden. It was easy to see we were a few weeks early for the river run fish but it was a fantastic time for the saltwater kings for the 4th of July. Simply put, fireworks in Thorne Bay are cool; king salmon are even cooler, and casting a salmon fly searching for the early silvers in the river might be the coolest of the cool. 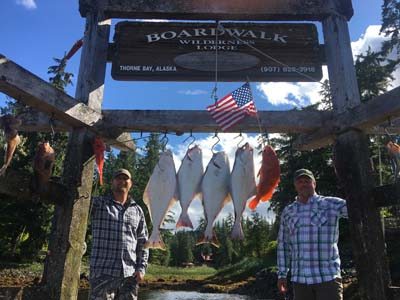 Blue skies, calm waters, and limits of fish can be expected on a regular basis when visiting Alaska's Boardwalk Lodge.

Back at the lodge, there were saltwater boats returning and bragging over a 40-inch, 35-pound king salmon. I did, of course, get my picture taken with that fish; sometimes I still like to be a big deal.

Day-four was on us super fast and Deming and I agreed to head out to the salt in search of halibut and yellow eyed rock fish. I had almond crusted halibut the night before for dinner, as a result of this trip. I like to make notes in retrospect that are impossible to argue with. For example, “fly to Ketchikan 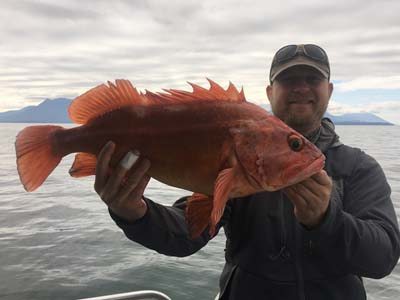 Wes Atkinson with a beautiful yellow eye. They are not only a beautiful fish, but also excellent table fare.

Alaska, take a float plane to Thorne Bay, meet Brad at the dock of Alaska’s Boardwalk Lodge, leave said dock and head out to known location of halibut, drop salmon belly from previous day 250 feet down onto halibut’s head, set hook, battle 40-pound halibut up to boat, gaff halibut, and repeat process many times daily. Return back to Alaska’s Boardwalk Lodge for a night’s rest to prepare to repeat process for several more days. On return trip home grab box of salmon and halibut that has your name on it and take it home with you. When home, open box and place the contents in the freezer, catch up on sleep for a night. Wake up and go to the freezer and set out two frozen vacuum sealed packages from Boardwalk Lodge. Set oven to 375. Smiles everywhere.