Veteran Alaska fishermen know their stuff. From tackle and gear needed, to species that they will be going after as well as time of runs, they have it down to a science. But for the vast majority of novice Alaskan travelers hoping to experience a trip of a lifetime, which hopefully includes catching a bunch of fish, well, let’s just say experience and knowledge in this case is going to win out just about every time.

When the topic is Alaska, I guarantee the word "salmon" is also going to be part of that conversation. Now, the first thing you have to remember is, the winters are long and the summers are short up north and the window for taking advantage of fishing is pretty narrow. The first runs of salmon (kings) start to show up in May in some areas and the last species of salmon (silvers) finish up in the first part of October in others. That’s a pretty small window of opportunity, especially when you take into consideration that not all species are running at the same time.

The following is a brief article about the five species of Pacific salmon that are available in Alaska. Some species are more prolific in some areas than others and of course, some runs are much larger than others. But hopefully, this will shed a little light on the different species for those with inquisitive minds! 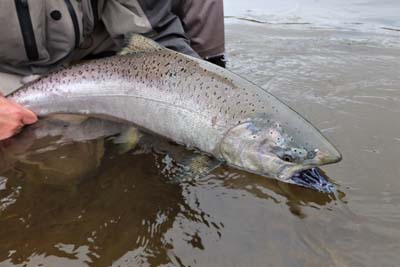 The Chinook salmon (also known as king salmon) is the largest species of Pacific salmon . The common name refers to the Chinookan peoples. The flesh of the salmon is also highly valued for its dietary nutritional content, which includes high levels of important Omega-3 fatty acids. The Chinook is blue/green, red or purple on the back and top of the head, with silvery sides and white ventral surfaces. It has black spots on its tail and the upper half of its body. Chinook have a black gum line which is present in both salt and freshwater. The current sport-caught world record, 97.25lb, was caught on May 17, 1985, on the Kenai River. Chinook may spend one to eight years in the 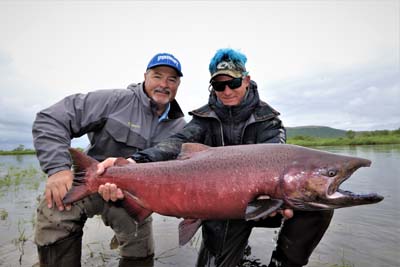 ocean (averaging from three to four years) before returning to their home rivers to spawn. They also undergo radical morphological changes as they prepare for the spawning event ahead. All chinook lose the silvery/blue they had as ocean fish and their color darkens, sometimes with a radical change in hue. Chinook spawn in larger and deeper waters than other salmon species and can be found on the spawning redds (nests) from September to December. The female salmon may lay her eggs in four to five nesting pockets within a redd. After laying eggs, females guard the redd from four to 25 days before dying, while males seek additional mates. Chinook eggs hatch 90 to 150 days after deposition, depending upon water temperature. Egg deposits are timed to ensure the young salmon fry emerge during an appropriate season for survival and growth. Fry and parr (young fish) usually stay in fresh water 12 to 18 months before traveling downstream to estuaries, where they remain as smolts for several months. Some Chinooks return to the fresh water one or two years earlier than their counterparts and are referred to as "jack" salmon. "Jack" salmon are typically less than 24 inches long, are sexually mature, but just return at an earlier age.

Interesting Note: A Chinook's birthplace and later evolution can be tracked by looking at its otolith (ear) bone. The bone can record the chemical composition of the water the fish had lived in just like a tree's growth rings provide hints on dry and wet years. The bone is built with the chemical signature of the environment that hosted the fish. Researchers are able to tell where different individuals of Chinook are born and live in the first year of their lives. Testing is done by measuring the strontium in the bones. Strontium can accurately show researchers the exact location and time of a fish swimming in a river. 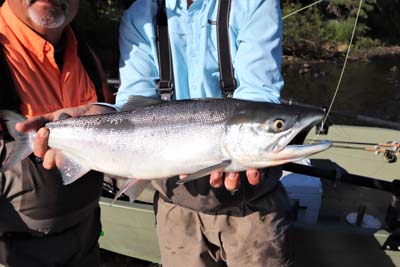 Sockeye salmon, also called red salmon, is an anadromous species of salmon found in the Northern Pacific Ocean and rivers discharging into it. This species is primarily red in hue during spawning. Juveniles remain in freshwater until they are ready to migrate to the ocean, over distances of up to a 1,000 miles. Their diet consists primarily of zooplankton. Sockeye salmon is the third-most common Pacific salmon species, after pink and chum salmon. Sockeye salmon use patterns of limnetic feeding behavior, which encompasses vertical movement, schooling, diel feeding chronology, and zooplankton prey selectivity. They can change their position in the water column, 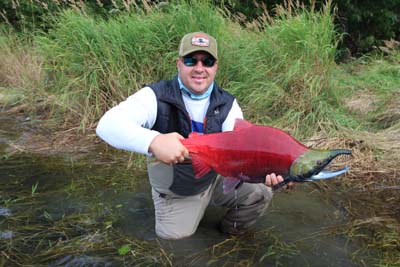 timing and length of feeding, school formation, and choice of prey to minimize the likelihood of predation. This also ensures they still get at least the minimum amount of food necessary to survive. All of these behaviors contribute to the survivability and therefore fitness of the salmon. Sockeye salmon exhibit many different life histories with the majority being anadromous where the juvenile salmon migrate from freshwater lakes and streams to the ocean before returning as adults to their natal freshwater to spawn. Similar to most Pacific salmon, sockeye salmon are semelparous, meaning they die after spawning. The majority of sockeye spawn in rivers near lakes and juveniles will spend one to two years in the lake before migrating to the ocean, although some populations will migrate to saltwater in their first year. Adult sockeye will spend two to three years in the ocean before returning to freshwater. Females will spawn in 3–5 redds over a period of several days. The eggs usually hatch within six to nine weeks and the fry typically rear in lakes before migrating to the ocean. 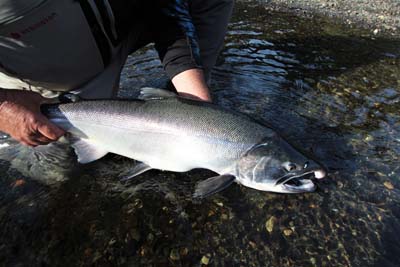 During their ocean phase, coho salmon (also known as silvers) have silver sides and dark-blue backs. During their spawning phase, their jaws and teeth become hooked. After entering fresh water, they develop bright-red sides, bluish-green heads and backs, dark bellies and dark spots on their backs. Sexually maturing fish develop a light-pink or rose shading along the belly and the males may show a slight arching of the back. Mature adults have a pronounced red skin color with darker backs. They also develop a large kype (hooked beak) during spawning. Mature females may be darker than males, with both showing a pronounced hook on the nose.The eggs hatch in the late winter 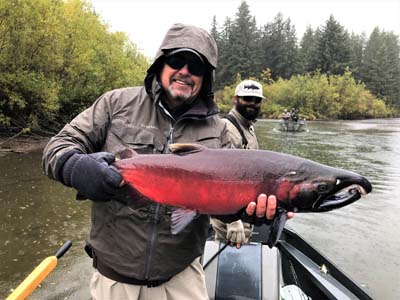 or early spring after six to seven weeks. Once hatched, they remain mostly immobile during the alevin life stage, which lasts for 6–7 weeks. Alevin no longer have the protective egg shell and rely on their yolk sacs for nourishment during growth. Young coho spend one to two years in their freshwater natal streams, often spending the first winter in off-channel sloughs, before transforming to the smolt stage. Smolts are generally 4- to 6-inches and as their parr marks fade, the adult's characteristic silver scales start to dominate. Smolts migrate to the ocean from late March through July. Some fish leave fresh water in the spring, spend summer in brackish estuarine ponds and then return to fresh water in the fall. Coho salmon live in salt water for one to three years before returning to spawn. Some precocious males, known as "jacks", return as two-year-old spawners. 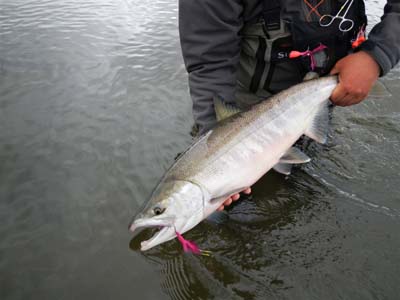 In Alaska, they are the first salmon to spawn, in June and August. Chum salmon fry migrate out to sea from March through July. They spend one to three years traveling in the ocean. They will die about two weeks after they return to freshwater to spawn. A single female can lay up to 4,000 eggs. Along with vertical stripes along their sides, chums have an ocean coloration of silvery blue green with some indistinct spotting in a darker shade and a rather paler belly. When they move into fresh water the color changes to dark olive green and the belly color deepens. 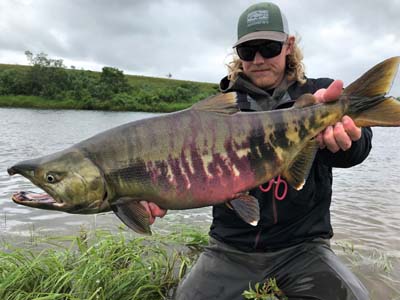 When adults are near spawning, they have purple blotchy streaks near the caudal peduncle, darker towards the tail. Spawning males typically grow an elongated snout or kype, their lower fins become tipped with white and they have enlarged teeth, this is where they get their nickname, Dog salmon. Chum salmon have kind of taken a bad rap over the years because they are not used as much for table fare, but they are one of the hardest fighting fish on any type of tackle and offer sport fisherman another great option when visiting Alaska waters.

The scientific species name for Pink salmon is based on the Russian common name, gorbusa (ropoywa), which literally means humpie. They are the smallest and most abundant of all Pacific salmon. In the ocean, pink salmon coloration is bright silver. After returning to their spawning streams, their coloring changes to pale grey on the back with yellowish-white belly (although some turn an overall dull green color). As with all salmon, in addition to the dorsal fin, they also have an adipose fin. The fish is characterized by a white mouth with black gums, no teeth on the tongue, large oval-shaped black spots on the back and a v-shaped tail. During their spawning migration, males develop a pronounced humped back, hence their nickname 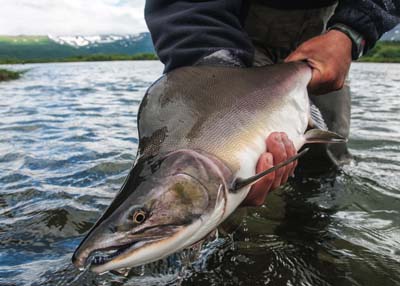 "humpies". Pink salmon in their native range have a strict two-year life cycle, thus odd and even-year populations do not interbreed. The female lays from 1,000 to 2,000 eggs in several clutches, often fertilized by different males. Females guard their eggs until death, which comes within days of spawning. The eggs hatch from December to February, depending on water temperature and the juveniles emerge from the gravel during March and April and quickly migrate downstream to estuaries, at about one-quarter gram in weight. The fish achieve sexual maturity in their second year of life. They return to freshwater in the summer or autumn as two-year-old adults.