The American Bison In The Books

An animal that once roamed the prairies of North America in abundance was driven to near extinction from over-hunting and downright slaughter. According to some sources, there were as many as 60-million of these majestic animals roaming North America prior to 1800. By 1900, they had been nearly wiped out, down to a population of approximately 300 animals. What was done to this great creature was a shame and we are fortunate to still have free ranging bison in today’s society. We not only have them, but there are huntable numbers in several western states.

Utah is one such place and I’m fortunate enough to live here and apply in the resident pool of applicants. We have two different herds, which are both wild and free-ranging. The Henry Mountains herd has had huntable numbers and an open season or two for quite some time. The Book Cliffs unit has only allowed hunting in the last decade. However, there aren’t a lot of tags available. 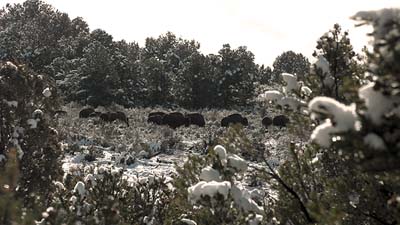 This herd of bison was a welcome sight after not finding any bison on the previous three days of scouting.

During the 2017 draw process, there were an even dozen tags up for grabs, which meant that six would go to the folks with the most bonus points and the remaining six would be offered up into the random draw, where people with as little as zero bonus points could draw this coveted tag. With twelve points going into the draw, I didn’t have much hope to be one of those fortunate people in the random draw.

Amazingly, I was one of the six lucky people to draw a tag. I was super excited, but a bit overwhelmed at the same time. My fall schedule was already overbooked and there was no way to give this tag the dedication it deserved in scouting or hunting.

I made one call to Coby Hunt, who owns Utah Big Game Outfitters. I knew about him from the numerous big mule deer he had guided in the Book Cliffs area, as well as the arid desert area near Green River, Utah. Coby gave me a lot of insight on the area and said he would love to be part of the excursion, since it is right in his own back yard. He has run cattle there since he was big enough to sit on a horse and knows just about every nook and cranny on the mountain. Due to my extensive schedule, we decided that the last part of the hunt would be the best time for both of us.

I was finishing up on Colorado’s fourth season hunt in 70-degree weather, which looked like it was going to provide ideal conditions for us to horseback into the Book Cliff’s roadless area where Coby had watched some tremendous bulls over the summer and early fall. He felt that several of these bulls would be really close to that Boone and Crockett threshold. Since this was a once in a lifetime tag, I wanted to make the most of the opportunity and harvest as large a bull as possible.

When I got home, it appeared that the snow dance I had done in Colorado for the deer hunt was finally going to be answered. Unfortunately, it was several days too late and looked like it could become a serious problem for our backcountry hunt.

The morning I was scheduled to leave, the snow was coming sideways and radar showed a blob the size of Texas over Utah, Nevada and southern California, which meant this was going to be a good one. My good friend, Mike Duff, was already in Vernal to start the hunt when I decided it might be safer to travel when the snow let up. It took two full days for the storm to pass and it had dropped several feet in the lower country and we had no idea what the high country held. However, we decided to change plans and hunt the northern part of the unit, which has some roads instead of requiring horse backing into the unknown.

Mike was having no part of sitting in a hotel room, waiting for me to show up and decided to scout the northern area through the storm. By the time I arrived, he had several days of scouting under his belt, but had yet to see one of the massive beasts. I was a little concerned that I had drawn a once-in-- lifetime tag and had pushed off the hunt to the point that I handicapped my own opportunity. Coby assured me that he wasn’t going to let my tag go unfilled. He was willing to load up the horses and bust trail into the roadless area, if needed, to find me a bull.

We rolled out on the first morning, with only six days left in the hunt. The temperatures were in the low teens, but at least the snow had passed and we had clear skies. The plan would be; cover as much ground as possible in the truck and glass the open areas for herds of bison. Since there is a lot of oil and gas exploration in the area, there were a lot of roads to check out, which simplified the process. However, this is a huge unit and we were pretty much starting from-zero in finding bison. 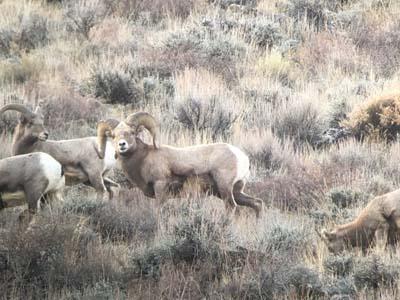 This great ram took an hour of our time as we watched him rut and parade around with his harem of ewes.

We had been hunting for nearly three hours when a whopper Rocky Mountain sheep captured our attention. Sheep are Coby’s passion and he totally forgot that we were on a bison hunt. I can’t say that I’m a good judge of sheep, but Coby wanted my satellite phone to make a call and see about getting the Sportsman’s tag holder over to shoot this sheep.

We finally got Coby focused back on the job at hand, finding bison, after we couldn’t make contact with the Sportsman’s tag holder.

The sun had started to shine brighter and it was turning into a nice winter day. It became even nicer when we rounded a corner to see a herd of nearly forty bison walking through the sagebrush and pinion trees. The wind was in our favor and they hadn’t heard the truck. We sat in the truck until the last one was out of sight. We then grabbed the spotting scopes, camera and rifle to move in for a closer look.

We had closed the gap to about 600 yards and settled in to glass the herd. There were lots of cows and calves and a few young bulls, but I couldn’t see anything worthy of my tag. I was just about to pull the plug on this group and move on, when a tank of a bull walked out of the trees. He stood nearly a foot taller than any of the other bison and it was obvious that he was an old warrior. 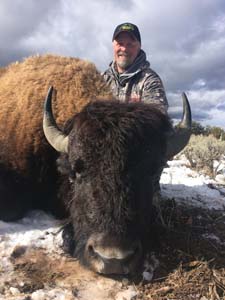 Only a couple of inches short of the record books, it was still a memory that will last a lifetime.

My heart started to pound and I felt an excitement come over me that I hadn’t felt in years. I was sure the old bull must have heard my heart beating when he lifted his head and looked right at me. I was shocked! He had a massive horn on his right side that I was sure would exceed the Boone and Crockett requirements, but he was totally missing the horn on his left side. Wow, what a shame. My emotions had just been taken on a massive roller coaster ride and I was battling with the thought of “should I shoot him or should I not”? I knew my taxidermist could make a replica of the right side and put it on the left, but he wouldn’t make the books the way he was. I had harvested numerous animals that would make the book, yet I had never put one in there. What was I waiting for? I guess, enough time to pass for big bull #2 to get up out of his bed and make his presence known. 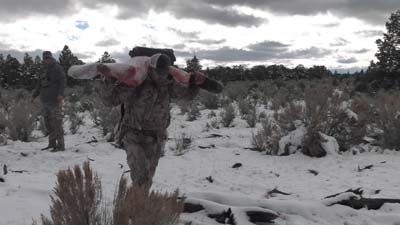 Coby Hunt not only proved himself to be a good outfitter but a great pack mule. He already had one front shoulder on an ALPS pack and threw the other over the top. Three hundred plus pounds of brute.

This new bull wasn’t quite as tall as the old, one-horned warrior, but he was massive and in his prime. In fact, he might even have been the guy who knocked the warriors left horn off. I would never know, but I did know that this was a bull worthy of my tag.

I immediately went into “Kill Mode” and it was as if the bison could feel the tension in the air. They all herded up and I couldn’t get a clear shot at anything as they slowly moved away. We played cat and mouse with the herd for the better part of the next hour. We were as close as a hundred yards from some of the herd and as far as five hundred from the rest. We set up for a shot on two occasions, 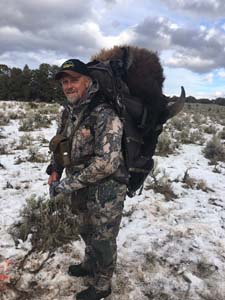 Taking great pride with the last load to the truck. The hide and a head weighed close to 200 pounds.

hoping the bull would give us a clear shot. Our third attempt had us in the pinions and most of the herd in the sage. A small fence had slowed the herd down as they jumped the last two strands of wire that were up between two poles. The big bull was the last one in the group to make his way through the sage. I had laid down across my pack with my trusty 26 Nosler, only three hundred yards away. The big bull looked back at me as the final calf cleared from behind him, leaving a clear shot. I slowly squeezed the trigger and that 127 grain Barnes bullet crumbled the giant in his tracks.

I started to get up, but Mike Duff tackled me with excitement. He had experienced a lot of great hunts with me, but this was truly a hunt of a lifetime. As we walked up to the giant warrior, it was a surreal moment for me. I sat by the bull for over an hour, taking in the moment and enjoying the experience. This was a special piece of history for me and to have Mike Duff and Coby Hunt there to share it on this cold, November day in 2016 is something I won’t ever forget. Long live the American Bison and the great experience they can provide to all.