The snow came hard and the large flakes blew in sideways, the wind howled, and the tent shivered in the dark. I flipped the light on to check on my client mostly because I guess that is what guides do. He had snored steady for two hours so it was mostly just reflex; in the morning he would tell me he hadn’t slept well through the night. Earlier in the night a cow elk walked through our camp and shattered the stillness with a bark; it made me laugh because I knew what it was, but my body didn’t act like it. My client never budged. Three days before with only six inches of snow on the ground we had ridden horseback the eight miles to where we would make our camp. I had glanced at the forecast 87 times that morning to notice the snowflake symbol next to a Tuesday - either way I was going hunting. But now in the moonlight on a Thursday was the complete opposite of what I would have called a snowflake next to a Tuesday. This was a full-on northwest Colorado blizzard and we couldn’t get 100 yards out of camp. This was definitely an experience and not necessarily the one my client had expected, but it was a legitimate backcountry experience. 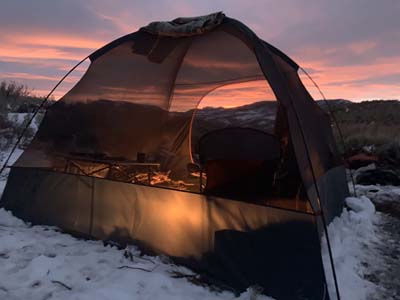 I went through my mental checklist and did some basic math. I do mean basic math - we had enough fuel, we had enough food, if the spring froze, we could boil snow. I had everything mostly dried out from the fire tent I had built the day before. For two days we huddled around a propane heater and I noticed the mental strain building. I had packed in two extra tents in case of the unforeseen, so I cut the floor out of a brand-new Alps 6-man and dug a pit, gathered the tarped firewood and went in to build a fire. Kept the fly on long enough for the heat to build, on two occasions I came sprawling out from the smoke that had nowhere but my lungs to go. After some coaxing, I finally got everything dried out enough to flame. Then ripped the fly off and the rush of oxygen popped the ancestors right into place. Here the strain began to lift, and the conversation ever so slightly began to bend to those who walked before. The primal response to the light that consumes everything that gives it flame is in all of us, I know that you know. We had enough room on the horses to pack in one solid change of clothes and the fire gave us a dry change. Maybe tomorrow I could push the sweat now that we had a dry change? The amount of energy needed to power through that snow had been unproductive at best. 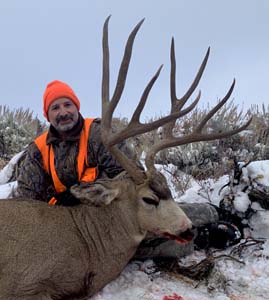 In 2015 I sold a company called Atkinson Expeditions, a full-service trophy hunting outfitting company primarily conducted on private land. It’s still a bit of a mystery to me why I knew I needed to sell the company. I will say at this point my heart just wasn’t in it. And that my friends, when there are bills to pay and responsibilities to ex-wives and an ego the size of Colorado, that is a really tough decision. Bottom line was, whether it was a gift from God, a mid-life crisis, or total denial, I sold it. Stepped completely away from the industry and signed a non-compete for the entire world. I went to find something new, 100% clear that I would never outfit again, mostly because I was faced with a peculiar shift in my awareness. I just didn’t feel good anymore about some of the animals we were killing. There was no rhyme to it and there was no remedy. It just didn’t feel right and I was too insecure to speak my findings. I experienced emotional discomfort with the massive disconnect hunters seemed to have with their quarry. The business I had made was responsible for five 200” deer a year and fifteen deer over 180” and the moral dilemma of turning a profit on calcium was oddly leaving me shaking my head. It sucked, and I had no idea how to express what I was going through to my team of guys who were born killers and the best team I have ever seen. I was stumped. So, I sold the company. The identity crisis went full tilt as I searched over the next four years to find something that I could pour myself into that resonated with what I would call my heart. 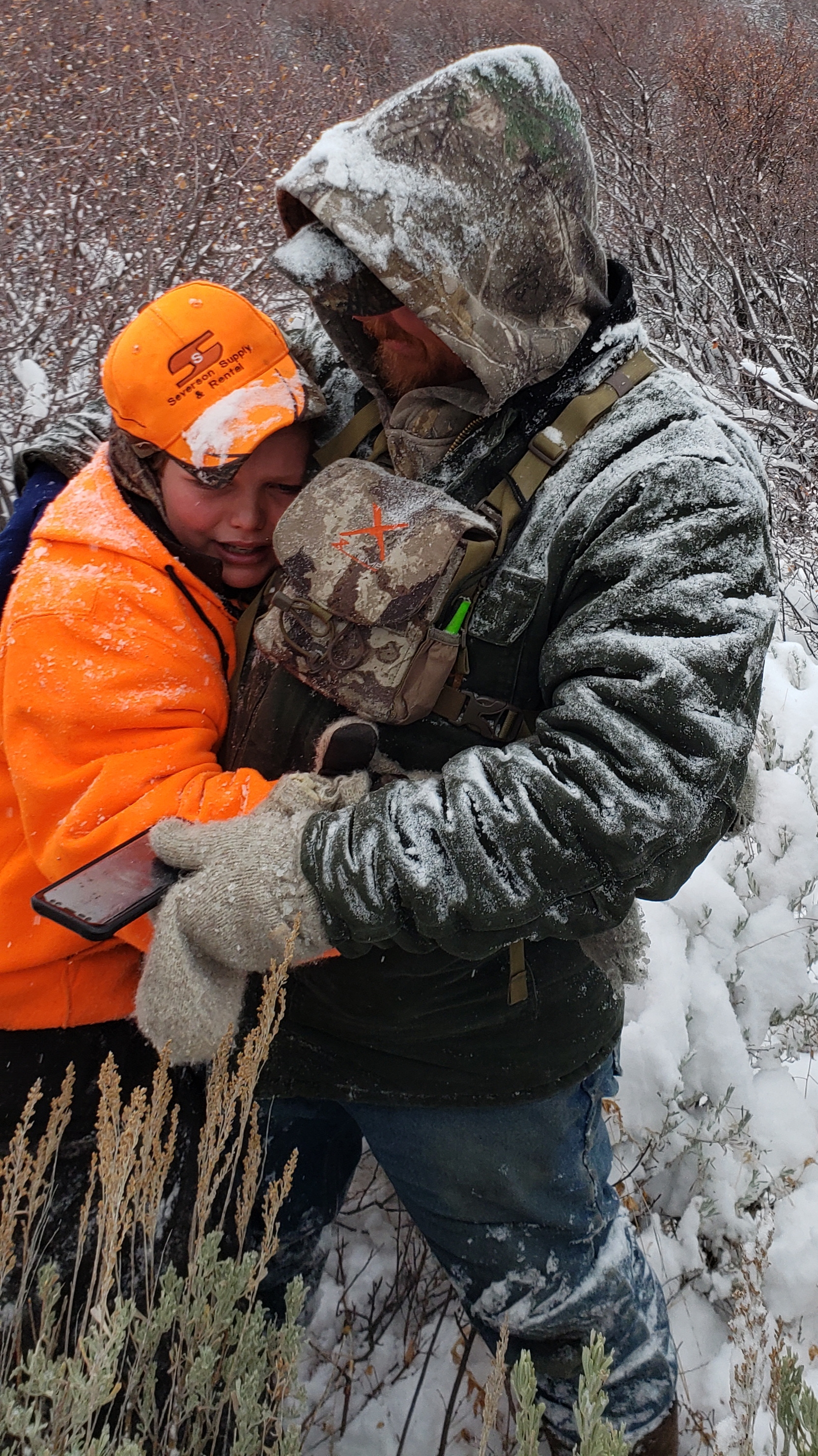 The wind let the straight-down snow be for a bit just as daylight might have been showing. I boiled some water for breakfast - oatmeal with freeze-dried raspberries and coffee. The snow was either moving the deer all night long or they were buried tucked in tight with an ancient wisdom that less is more; I would know in about 30 minutes. The zipper was frozen from the heater creating condensation, careful to not do impatience here or you won’t have a wind stopper for the rest of your hunt. I do not have the words nor the sense to describe that hunker-out-of-the-tent stiff crouch, the what-happened-to-my-lower-back move. I love that morning ritual. I crouch/crawled out of the tent and couldn’t see 100 yards. There were perplexed does within 40 yards, they just stood. I said, "Good morning, ladies," and the client said, "What?!" I make him sound less than awesome because guides like to sound superior. But make no mistake, the client is my friend and he and I would go to battle for each other every time. It was obvious that’s what we were doing today. I came back from the cook-tent with brunch, Breakfast Hash Mountain House and some Honey Stingers for dessert. I mumbled, "No need to get in a hurry, but good news is the does are up and feeding, so maybe, just maybe." We were going to have to relax our minds again and enjoy the once again straight down snow. Yep, I said it; relax the mind.

Growing up in Northwest Colorado in the small town of Craig set the stage for my interest of the mule deer. By statistical analysis odds were pretty good that I would develop a relationship to hunting. And all of the wonderful (and I mean life-altering childhood gifts of backyard bucks) did properly influence my trajectory. But what was I doing now 8 miles in the middle of nowhere on BLM land? Why had I not just sucked it up with Atkinson Expeditions?! I could have griped about the hunters who only cared about inches, been frustrated by proud landowners, complained about the ego guides Atkinson Expeditions had created. I could have kept the company afloat; my heart didn’t need to be in it, what arrogant idealistic world did I think I was living in? Now I’m buried in a snowstorm with the first rifle client of my new adventure when I could have kept Atkinson Expeditions and just listened to another guy say, “Kind of weak on the fronts … don’t you think?” At least for crying out loud I wouldn’t be buried in an Alaskan sheep style camp in Colorado mule deer country, where just down the road 15 miles as the crow flies, they are defrosting the ice on their windshields to go hunt 20,000 acres of private land. The irony. 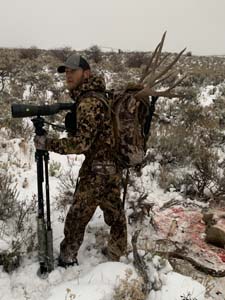 When my non-compete ended and I had unsuccessfully found anything that would support my love and passion and desire to explore the outdoors, I experienced humility and bafflement. Driving to the Department of Regulatory Agencies in Denver, I kept shaking my head. Walking into the Little Snake River BLM Field office in Craig Colorado, I felt odd. Really after all this, after what I can only call the deepest soul-searching time of my life, I found out I’m not employable and I simply have no other skills. I’m a woodsman and sharing that experience with someone who enjoys it or wants to experience it is what I’m all about. That’s my plan! Yet, for all of the questions I still have, and they are plenty, deep down it was calling to me again. I know we all change and grow and there is a lot of life in life, but this part of me didn’t. After all the change there was this part of me saying, yeah, let’s do this. This time with a little more presence, this time absent of the sexy marketing campaign of giant bucks that created the unrealistic expectations, this time let’s do this because this is who we are, or simply maybe because I have no idea what else to do. Getting approved for my BLM public land authorization was different, depositing that first check for good grief the only name that would come to me, Wes Atkinson Enterprises LLC. It was different, it was deep, and I was going to accept the challenge of the mule deer in the wide-open sagebrush, in places I had never been. I was a bit freaked out and super excited with every scouting trip. Did I still know how to find them, would I still be good at my craft, and could I do it without a wife at home to save my ass when I forgot the obvious? Regardless of all the questions, I was doing it for all the right reasons.

There was a snowflake symbol next to a Tuesday. Come on iPhone isn’t there a symbol for a blizzard? Would this storm ever end? How did I forget the ghost pepper?

When the storm broke, we saw 68 bucks. One stood for a moment and re-bedded under a serviceberry. The client smiled and wiped snow off the scope. The rush of emotion still came when I saw the buck stand and check his blind spot. From two miles away I fought the tears, knowing that this old timer buck was about to call it quits in this lifetime. After one well-placed heart shot, we would honor the gift this mule deer brought us. This one felt right. The questions still remain, and yet I am this, I am like you, alive out here. I wanted to be more, maybe do something that would really make a difference in this world. But alas, I am a guide, I am a hunter, and I would be honored if you would help me welcome the mystery of the backcountry mule deer experience.