Best Waterfowl Hunting in the West

As we pulled into the field, I felt a little awkward knowing that we were setting up decoys in what felt like the middle of a sub-division. However, I quickly got over it as legal shooting light arrived. We were facing west with the Colorado Rockies being our backdrop and literally thousands of geese in the horizon headed our way. Travis Reininger, who is the owner of Stillwater Outfitters, was our guide and sitting right next to me. So while we waited for the geese to close the distance, I was able to get the rundown on this great location. He said that Stillwater Outfitters was the most successful waterfowl business around and had been in the area for decades. He purchased the business due to their great reputation, quality land, and the fact that many of these great properties had agreements that allowed them to hunt some very residential areas. 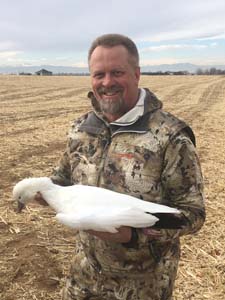 This was the case with our first morning’s setup. We were in a field that the resident geese had grown accustomed to stopping at on a regular basis. They would roost in town and on the golf courses away from any danger, which gives them plenty of security. When they head out to feed, they don’t have to travel long distances and Stillwater has many of these ideal places.

Travis said “cover up,” which meant we needed to pull the lids over our pit blinds and wait for him to call the shot. Some expert calling and the birds locked up from half a mile away and glided right into the decoys. “KILL EM!” We all flipped the lids to our pits and commenced the firing squad at unsuspecting hungry geese. The birds had barely hit the ground when Travis said to get covered back up because there was another big flock behind them. Just like the first flock, they did the same thing. When it was all said and done, it had taken more time to set up the decoys than it did to limit out on five honkers apiece. Fortunately for us, we had several more days in store. 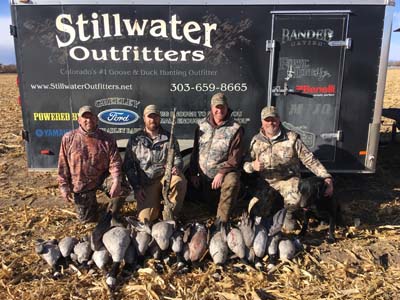 This story took place nearly a decade ago, but it has repeated itself time and time again over the past ten years. Each and every year, I round up a group of friends and we head to the Denver, Colorado area for our annual goose hunt. During this ten year period of time, we have only had a couple of days where we didn’t limit out. Many times, we are limited out before the sun even breaks the horizon and we find ourselves being spectators for one of the best shows ever. To watch a flock of Giant Canada geese be lured inside of ten yards with feet down, wings cupped, and neck stretched out is an unbelievable sight when you are just going to watch. I used to travel to Canada each and every year to enjoy this same type of experience, but once I found Stillwater Outfitters, I seldom make the migration north of the border. The season usually runs from October until early February, which provides plenty of time to block out three or four days for a hunt. Flying into the Denver International Airport is relatively inexpensive from nearly anywhere in the USA and being a major city, there is a lot to do when you get tagged out early. These hunts are very affordable as well. With three days of hunting, hotel, airfare, and food, you can get away with less than $1,500 per person, which is about half of what we used to pay to travel to Canada. Stillwater Outfitters is obviously one of the Sportsman’s News Platinum Approved Outfitters and someone you can count on to deliver a great time. Book early as his great reputation and repeat customers fill up the schedule pretty fast, and I’m taking my normal 3 days right off the top. www.stillwateroutfitters.com