Big Game of the Treasure State

If you are a hunter, fisherman, or just enjoy the outdoors, you know why Montana is called the treasure state. If you are a big game hunter, there are some true gems. Montana has some great genetics for sheep, elk, and mule deer and there are a select number of units where the Montana Department of Fish, Wildlife, and Parks manages for quality as well. On top of that, there are some huge private ranches that allow limited hunting and make it even better. 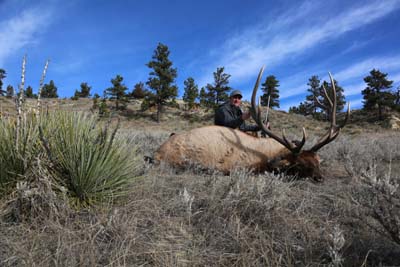 Applying for these tags, which have very low draw odds, versus applying for a unit that puts you into the field and fills the freezer is a decision you as a hunter have to make each and every year. More than likely, you are going to build points and have a lot of disappointment, but if you want to put yourself into a position to hunt a unit that has big ones, that’s what you have to do.

My good friend, Jeremy Sage, has limited time to hunt each and every year and trophy hunting is high on his list, so he applies for some of these hard to draw units all over the west. He had plenty of other hunts planned with landowner vouchers and general tags that would assure that he had meat in the freezer when it was time to apply. When the results came out for Montana, he called me to notify me that he had drawn one of the best tags in the state. It was in an area that he had hunted in the past, but where there is a bunch of private property. I know that my good friend Guy Eastman had drawn this tag in the past and had a lot of intel to share.

I gave Guy a ring and the first thing he said was “don’t call anyone else, but Craig Hueter of Trophies West. He consistently kills giant bulls for his clients and he runs a great operation.” I shared the information with Jeremy and left the rest up to him. 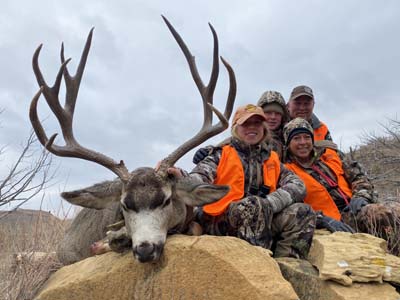 After some analysis and looking at the bulls he had taken in the past, Jeremy decided that this was likely going to be a very good opportunity for him to harvest his largest bull ever. His first contact with Craig at Trophies West was just as Guy Eastman had stated and it was apparent that this hunt was going to be a memorable one. Craig is very good natured and always responded to questions in a timely manner. He was accommodating when Jeremy inquired about bringing his wife and son along as both are avid hunters and he wanted them along for the experience. I mean how often do you get a chance to hunt with your family and have a target of a 370” B&C caliber bull be achievable? The next few months drug on as Jeremy was getting more and more excited about putting his tag on a bull of a lifetime. He was not only counting down the days but the minutes until he and the family would be headed to Trophies West.

Finally, the hunt dates arrived! The Sage family had a difficult time packing for their trip as the weather was considerably warmer than what they had originally planned for. Seventy degrees in Montana in November was unusual, so they decided to leave the down coats at home and throw in some sunscreen. 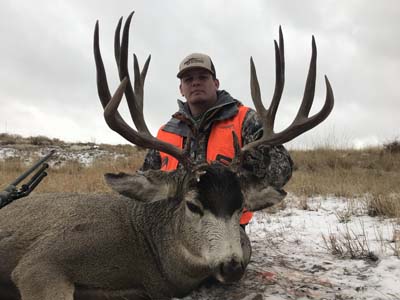 The first impression of the lodge at Trophies West took their breath away. The photos on the website definitely don’t do it justice. They were escorted to their guest room and were happy to find all of the comforts of home. The great room and kitchen area were very spacious and gorgeous. It was filled with years’ worth of shed horns that had been found on the properties of Trophies West. Most of them had their own stories about who found them and if that animal had been harvested yet. The dining room and great room were able to seat a large number of guests. Luckily, they arrived just in time for dinner! Husband and wife team Deb and Dale made the most delicious food and went out of their way to accommodate any food allergies that guests might have. No one ever went hungry and the running joke was that they would have to go on a diet when they got home because the food was incredible. While eating dinner the first night, they met Chris who would be their guide for the next week. After dinner they made a plan for the first morning’s hunt.

Due to the extreme warm weather, Chris planned to leave well before dawn as the elk were not being as active once the sun came out.

The alarm rang pretty early, but the excitement of what was in store had everyone ready quickly. As they drove to where they would be hiking in, Chris and Jeremy discussed the quality of bulls he had been seeing on the ranch. Jeremy communicated his strong desire to harvest not just any bull, but a giant. Having a tag of this caliber in his pocket was something that he didn’t take lightly and a 370” bull was what he wanted. Trophies West harvests bulls of this caliber every year, but they aren’t behind every tree, so the Sage family and Chris were going to have their work cut out for them. 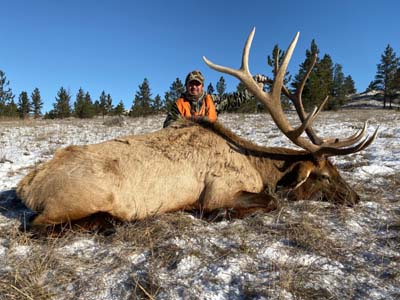 Over the next few days they hiked, stalked, and glassed their butts off. Chris seemed to be one with the elk and would know exactly where they would be. The herds they were on held some good animals, but Jeremy was holding out for his dream bull. Unfortunately, the weatherman was correct and they were blasted by unseasonably warm weather. This made most of the elk bed up before legal shooting time and come out to feed well after the sun went down each night. That is a bad recipe for harvesting a big bull. The mule deer rut was in full swing though and the sheer quantity of big bucks they watched daily was absolutely amazing. Plenty of them were coming into the lodge with successful clients as well.

The morning of day five, Jeremy got into a place Chris said always holds big bulls. Sure enough, Chris was right again, and they spotted some bulls feeding about 1,000 yards away. It was still fairly dark, so they had to sit and wait for daylight to decide if they were going to make a move on these bulls.

Just as the sun was cresting the horizon, the bulls stepped into the open and they were able to determine the size of the bulls they had been watching for the last hour. One of them was huge! Jeremy was excited as it looked like they would be able to make it happen. They began to plan their stalking strategy while keeping a close eye on them through the spotting scope. There were 3 bulls feeding back and forth with one bull being the biggest. They could only see one side of the biggest bulls’ antlers clearly with all three bulls feeding together. When the big bull finally cleared and Jeremy could see both sides, his heart dropped. His other side didn’t match and was considerably smaller than the side they could see clearly. He was a 6x7 and an extremely impressive bull. 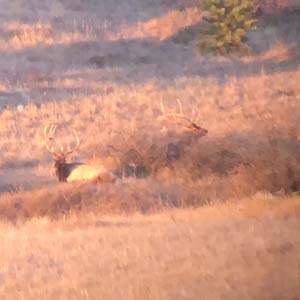 Jeremy sent me a PhoneSkope picture of the bulls. My first response to him was shoot him. He is bigger than anything you have ever taken and you have your family right there with you. It will be a memory that will last a lifetime. He very well could have broken that 370” mark, but nobody was positive about it. The body size on these bulls 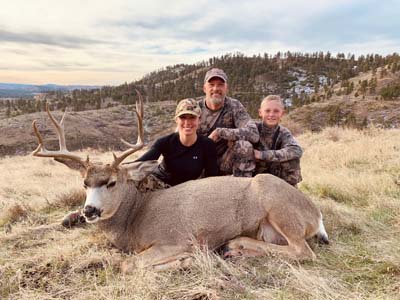 are significantly bigger than the bulls we harvest here in Utah and Guy Eastman had told me about this trait. I felt this bull was close to the shooter mark that Jeremy had set, but it was ultimately his tag and his decision and he decided to pass this giant of a bull. Jeremy’s son and wife had him second guessing his decision to pass that bull as the ups and downs of this type of trophy hunt continued. They were seeing many large bulls, but just not big enough.

This is the life of a trophy hunter. There are many clichés about it like, “you can’t shoot a big one if you shoot a little one” or “there’s always tomorrow.” The reality of a trophy hunter is that you always believe your ultimate dream bull could be just up over the next rise. Unfortunately for Jeremy, that never came on this hunt. When you spend a week and look at over 100 mature bulls and you 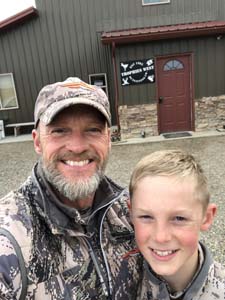 pass numerous bulls over 350 and one that was close to 370, you have to consider it a great hunt. Sharing it with your wife and son is still a memory they will never forget and I’m sure Jacob won’t ever let him off for not shooting the big one. I might even rub a little salt in that wound myself from time to time.

The one that that was obvious when this hunt was over is that Craig Hueter and Trophies West are truly first-class and everything Guy said they would be. I’ve arranged for us to give away a mule deer hunt with Trophies West for the 2021 hunting season. If you would like to be a member and have a chance to win this great hunt, sign up at promembershipsweepstakes.com