The best of Alaska fishing with Bearclaw Lodge.

One of our favorite areas of Alaska is the Bristol Bay region, which includes the massive Wood-Tikchik State Park, north of Dillingham. With over 1.6 million acres in area (about the size of the state of Delaware) it is the largest and most remote state park in the United States, comprising more than half of all state parkland in Alaska and 15 percent of the total state parkland in the country.

As you may have noticed, we here at Sportsman’s News are pretty particular when it comes to our association with lodges and outfitters. We are always looking for the best operations available, but many factors come into play when we make our decisions on which ones we will include in our Platinum Approved family of lodges and outfitters. Our goal is always to represent businesses that deliver on what they advertise, while also offering a fair price. And to protect those operations that we represent, we try not to promote more than one top operation in any one area or location, unless we feel that they offer different and distinct opportunities that would benefit our followers.

When we first started the Pro Membership Sweepstakes, Rob had just purchased the Alaska Kingfishers Camp on the Nushagak River to supplement his Bearclaw operation. He had been working closely with Bob Kratzer, the then owner at Kingfishers and one day they talked it over and Rob made Bob an offer that he couldn’t refuse. It was also great for us because we had been working with both operations for a number of years. 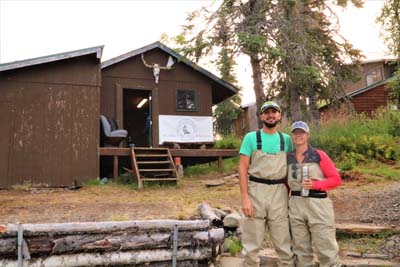 Larry Graber from Indiana was the eventual Pro Membership Sweepstakes winner and he was joined on the trip by his wife, Jules and Sportsman's News Pro-Staffer, Rick Rosenberg. When we told Rick about the trip, he said that he had a couple of people who would jump on the other spots, so our group would include Phil and Chad Solomon, Greg and Sarah Kemp, and Ed Thatcher.

We all met up in Dillingham on the afternoon of July 7th. Greg Morgan, the manager at Bearclaw, met us at the airport and we quickly loaded our gear into the awaiting van and headed for the dock at Lake Aleknagik. After a short 20-minute drive, we loaded our gear onto two awaiting boats and then took off across the lake to the lodge, just 15 minutes away.

Familiar faces greeted us at the dock on our arrival, as guides Steven Isaacs and Barrett Lober helped us off of the boats and welcomed us back to the lodge. Unfortunately, Greg informed us that Rob had to make a quick trip back home to Texas as his wife, Lisa, had to go in for an unplanned surgical procedure, but he assured us that everything was okay and that Rob would try and be back to say "hi" before we left.

After dinner, we planned out the next couple of days’ activities. The Solomons, Kemps, and Ed would be flying over to the Kingfishers Camp for king salmon, while Larry and Jules would be paired with Barrett as their guide and we and Rick would be with Steven as our target would be sockeye, rainbows, and grayling on the Agulowak River. 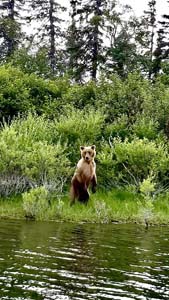 The next morning, we waved goodbye to the Kingfishers group as the rest of us donned our waders (Simms breathable waders and wading boots are supplied by the lodge) and loaded into our boats, headed for sockeye country. With many of the best spots along the first part of the Agulowak already taken, we headed upriver a little further. Soon, we eased our boats to shore and secured them as our guides grabbed fly rods (fly and spin cast equipment is supplied by the lodge) for each of us. 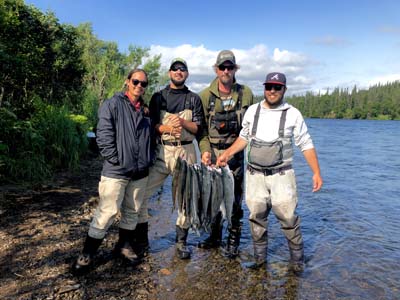 Steven and Barrett gave us a quick tutorial on “flossing” and soon, all of us were hooking into fish. If you have fished for sockeye salmon, you know that they are a little on the wild side when hooked. And when using a fly rod, well multiply that by 10! Jules was the first to experience the “knuckle buster effect” as her second fish hooked headed for the middle of the river. Before she could let go of the reel handle, it flew forward and truly welcomed her to Alaska sockeye fishing! By the time she landed it and then held it up, she was all smiles.

By noon we had filled our limit of ten sockeye apiece (yes, the run was outstanding again in 2019), so we then took a break for lunch before heading a little farther upriver in search of rainbows and Arctic grayling. 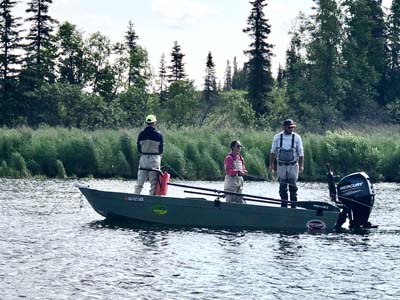 Our afternoon was full of plenty of catching, as the action was hot and heavy for dries, nymphs, streamers, and even mouse patterns. Sipping grayling could be seen in every direction for Rick’s dry/dropper setups and the rainbows were just hammering the streamers offered by Larry and Jules. This area of southwest Alaska is home to some of the very best dry fly fishing in all of Alaska and by day's end, we had landed so many fish, none of us could keep count. At 4:30 p.m. we headed back to the lodge for awaiting hors d’oeuvre and then another great meal. 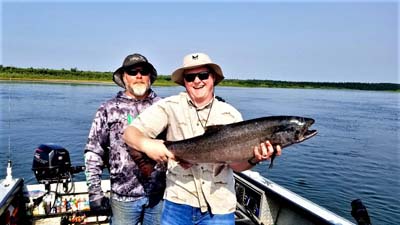 Day two was about a carbon copy of day one, with all of us again limiting out on sockeye and finding the rainbows and grayling just as active as the day before. By 5 p.m., the group that had flown out to the Nushagak had returned as well, with stories of kings caught and the big ones that got away. We filled each other in on our successes as we would be exchanging venues the next day. 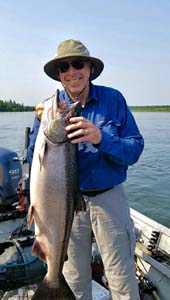 Unfortunately for us, because of the hot temperatures of early July and with numbers lagging a bit on the Nushagak, we were informed that the river would be shutting down for retention of kings and the use of bait for the rest of the season, which ended on July 31st. We decided to still take the flight over to the Nushagak to give Larry and Jules the experience of a float plane ride, but we would only be doing a day trip instead of an overnighter. We didn’t have any hookups, but the day was still an enjoyable one as we got to greet our friends at the Kingfisher’s Camp and had the pleasure of being guided by one of our favorite guides in Alaska, Conner Taplin. 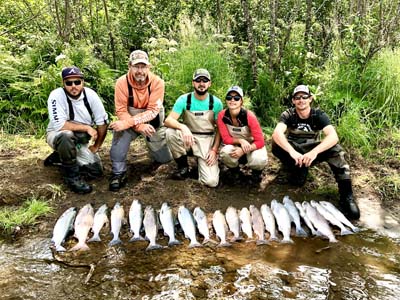 Our last two days at Bearclaw Lodge were nothing short of fantastic. By our last day, all of us had filled our fish boxes, so we keyed in on rainbow, grayling, and even some toothy northern pike. Wow, the days sure fly by when you are having fun! Sadly, our trip was coming to an end the next morning.

Rob made it back on our last morning as we shared a little breakfast before our departure. Everyone in our group expressed their gratitude for our great adventure and successes and we said our goodbyes as we loaded our gear for our return to the Dillingham airport.

Alaska’s Bearclaw Lodge had delivered again and we are already counting the days to our next visit. Speaking of our next visit, we will be adding a trip to their Kingfishers Camp to our 2020 schedule in the Pro Membership Sweepstakes, so if you’re not a member yet, you had better get signed up. In the meantime, if you want to experience Alaska at its best, give Rob Fuentes and his staff a call at 907-843-1605 to talk about all of the possibilities at both their Bearclaw and Kingfishers operations. You won’t regret it!