When we purchase trips from our Platinum Approved Outfitters for our Pro Membership Sweepstakes Giveaway, we purchase the very best season dates possible. After working with Jay Reynolds, who owns Open Creek Outfitters, for nearly a half dozen years, we knew that the first rifle season would give us one of the best opportunities to catch bulls rutting, bugling, and throwing caution to the wind. This would put us in position to be hunting elk during the third week of September and into the beginning of the fourth week. However, we needed to book this nearly three years in advance and when we did, I reserved half a dozen spots.

When I started telling all my buddies about the opportunity to hunt rutting bulls near the Yellowstone National Park with some serious big bull potential, I had people jumping up and down to fill the six spots we had reserved. The number-one spot was going to be for our lucky winner, which turned out to be Barclay Swann from Las Vegas. The remaining spots ended up getting booked by some of my really good friends here in Cedar City, UT.

Since we do most of these drawings nearly a year in advance, there was plenty of time to think about the hunt. In the Wyoming case, it also allowed us to put the winner into the drawing for a bonus point, which practically guarantees them a tag in the draw. When the draw results came out in the end of February, Barclay and all of the Utah crew were the proud owners of Wyoming elk tags. This is exciting for everyone who lives in the hard to draw states like Utah and Nevada, where you could wait twenty plus years to draw a tag to hunt bulls in the rut. So, to be able to do this with only one bonus point is pretty exciting.

The reason these types of hunts are offered during the height of the rut is due to the difficult access of the units where they take place. Open Creek Outfitters hauls their hunters on horseback just over thirty miles into some of the most pristine wilderness the west has to offer. The hunters are treated to an old style traditional elk hunt, reminiscent of the late 60s and early 70s, with the glow of wall tents and bugling bulls throughout the night as well as an occasional grizzly encounter.

This is exactly what my buddies from Utah were looking for in an elk hunting experience. When September finally rolled around and the leaves started changing, the social media sites were abundant with big bulls already hitting the ground throughout the west. It makes the excitement of the upcoming hunt similar to that of a child waiting for Christmas morning. 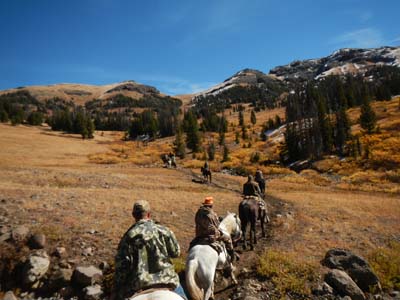 The 30-mile horseback ride into camp is pristine wilderness in some of the most beautiful scenery in the west.

Everyone arrived at Jay’s place the day before the hunt, to meet and greet the guides, weigh the gear, and get it ready for the next day’s ride. Everyone would overnight in the historic town of Cody and meet at the trailhead bright and early the next morning. They would ride the thirty miles in and the following day would be the opener.

With that many horses, mules, inexperienced riders, and an occasional grizzly, mishaps on the trail are almost expected, but the stock used by Open Creek Outfitters was praised by everyone on the trip and the ride in went without a hitch. The crew had a great meal and were ready for good night’s sleep when the time finally came.

Our winner and his good friend Brian Patterson, who was just along to share the experience and take photos, were going to be guided by Jay Reynolds himself, which is always a good thing because Jay knows about every trail, downfall, and elk hidey hole in the area. The Utah clan headed out in another direction with different guides. Rick Lunt and Rick Osborn would be hunting together and the plan was to hold out for something really big. Lunt already has several bulls adorning the walls of his cabin, so for him it was going to take something pretty impressive to pull the trigger. That was the plan for Osborn as well, until he saw a perfect six point bugling away on that first September morning. The changing of the leaves, high country, wall tents, and a nice six point is the vision of the perfect trip for Osborn and he put the hammer on the bull just hours into the hunt. During the same time Barclay and Jay were working on getting closer to a bull worthy of an opening day tag, but the big monarch gave them the slip. 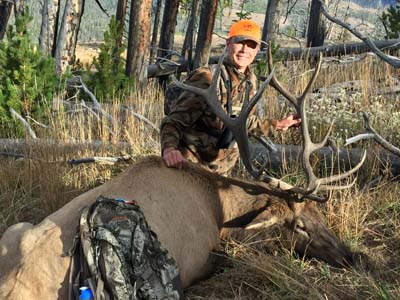 Rick Osborn was the first to connect with a Wyoming bull and got to be a spectator for the rest of the week-long hunt.

Several days into the hunt, the other Utah group got an experience worthy of a national geographic movie. They knew the drainage they were hunting had several grizzlies in it and were always cautious. However, once LaDell Eyre pulled the trigger on his bull, they weren’t prepared for the grizzly to rush the bull and try to take him off of his feet. The big bruin was literally trying to steal his prized trophy. He used a stump to launch high onto the wounded bulls back, but the adrenaline was kicking in on the bull and he spun the bear off. The second shot from LaDell’s rifle not only put the bull down for good, but was apparently too close for comfort to that bear and he blew off the mountain. However, it made for some very uneasy photo taking and packing out of the bull.

Lunt, as well as our winner, Swann, were still holding out for the giant they had come for on the last day. They had seen a few bulls north of that 360” mark throughout the hunt, but were never able to connect. So, it makes passing those numerous smaller bulls pretty easy. Lunt had passed on over a dozen overly mature five-point bulls that would have topped that 300” mark and one was probably over 320”, but not what he wanted, especially early in the hunt. As the hours of the last day approached, the thoughts of an empty freezer or some tasty elk weighed on Lunt’s mind heavily and he filled his tag with some groceries for the fall. Barclay wasn’t as fortunate and the big bull never gave him the opportunity he so desperately desired.

Although we purchase these hunts with the very best outfitters in the business, it is still called hunting; nobody is guaranteed an animal. We do this for the love of the hunt and the adventure and Open Creek Outfitters and their backcountry hunts are truly an experience. Best of all, some of those big bulls are still there and getting bigger for our next Pro Membership Sweepstakes winner, which will happen in September of 2018.