Casting To The Flash Of Silver

Fly fishermen are a funny sort. They come in all shapes and sizes and from all walks of life. Some say that to be a true student of the art, softly presenting a dry fly to the surface of a pristine mountain lake or stream is the only true form. Others just evolve into enjoying the challenge of the cast, the presentation and the hook-set. I guess you could say that I am a little bit of a cross between both, with my start in the sport on western streams and lakes that has now prepared me for the adventures that I am able to experience around the world.

As many of you know, one of my favorite places to fish is Alaska. I can’t say that any one part has overtaken me more than another, but I have definitely started to favor a few spots that have me dreaming of returning for just one more cast. One of those places I found about 300 miles southwest of Anchorage, a short floatplane flight from King Salmon in the Bristol Bay Region on the Egegik River. 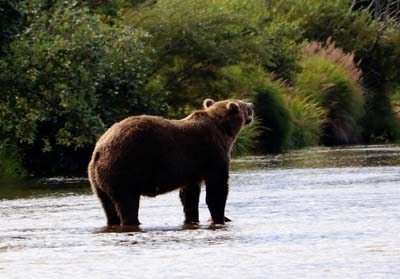 Big brown bears are also always searching for a fresh salmon or two in the waters surrounding Becharof Rapids Camp.

This area of Alaska is included in the Aleutian Range, so of course there is a towering volcano always present in the distance on clear days, but much of the area consists of vast landscapes of tundra valleys and waterways that support wildlife and waterfowl galore.

The head waters of the Egegik River start at Becharof Lake, the second largest lake in Alaska, second only to Lake Iliamna, covering over 300,000 acres. The lake is home to one of the largest runs of salmon in the world, with over six million sockeye salmon alone returning each year. The Egegik experiences about 1.3 million of that run, plus kings, chum, pinks (mostly on the even years) and of course, big numbers of silvers.

Now even though I love to catch salmon on a fly rod, I also know that not everyone has the same passion. You will always find my rod case packed with a couple of spincast outfits as well, with an assortment of spinners and pixies that will also get the job done, sometimes even better than with a fly. And notice that I say that I always have a “couple” of outfits with me! With the acrobatic skills of the high-flying silvers of Alaska, you better always have a spare on hand! 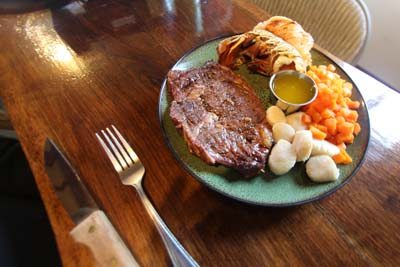 Surf and turf as fresh as it gets – Alaskan Style!

Our lodge of choice in this area of Alaska is Dave Mandich’s Becharof Rapids Camp. It is nestled along the banks of the Egegik River, about two miles or so from its exit from Becharof Lake. It is a permanent structure camp, with a main cabin that houses all of your meals along with satellite TV and lounging area, a fish processing shed with freezers for your catch, five multi-bed cabins and two separate shower and toilet structures, one with a washer and dryer available for your use.

The standard length trip with Becharof Rapids Camp is 6-days and 5-nights, which includes the round-trip floatplane flight from King Salmon. All accommodations, meals and bedding is included. You may also inquire about special fly outs from the main camp that can be either day trips or multi-day tent camp adventures for an added cost. Most of the special trips are for non-salmon species such as rainbow trout, Arctic grayling and char, Dolly Varden and possibly even pike in some areas.

Getting back to the main focus of the showcase of the area, the wide, shallow, basically slow moving Egegik River. Because of its size, you could never really have to worry about a place to fish. Now with only two camps on the river that is not a problem anyway, but the fishing can be so good, many lodges from as far as 200 miles away will fly in for the day to bring their guests to fish for silvers. Floatplanes can be seen buzzing around the area, with pilots on the lookout for pods of fish making their run up the river to the lake and on most days, there are pods everywhere! Fish can be seen flying out of the water all day long and ‘rollers’ are always teasing you as they make their way through the many channels, offering a great opportunity for the alert fisherman or woman to make a cast just in front of them and usually after a couple of rotations of your reel or strips of your line, its GAME ON! 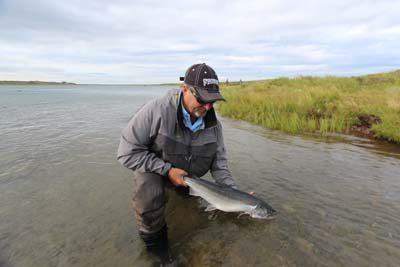 The author getting ready to release another nice silver salmon, one of fifty or so he was able to land on this day.

On our first afternoon, our host helped us load our gear into the boat and we headed to one of his favorite hot spots. Rick Rosenberg, one of my Pro Staffers, joined me on this trip to help film for an upcoming episode of our SNTV series and he grabbed the camera as I quickly put together my fly rod and tied on a weighted pink bunny leach, with a purple flash trailer. On about the third cast my line stopped in the current and I strip-set the hook. A second later a silver ball of muscle streaked across the water and headed for the middle of the river. After a half dozen tail-walking explosions and at least that many more runs, I finally worked my first fish of the trip to Dave’s awaiting net, a fresh, 12 pound, sea lice clad Coho.

During the next three hours of non-stop action, we tried just about every possible technique you can imagine: big flies, little flies, spinners, pixies and Dave even baited up a rod with a ball of roe (salmon eggs) and let me tell you, it was like the fish were pooled up, just waiting in line for their chance when it hit the water. As soon as the weight hit the bottom and the roe started to float up, the tap, tap, tap began and your rod was hoisted up over your head as you set the hook on another silver. What a great afternoon of fishing and what a great start to our week at Becharof Rapids Camp.

After we all enjoyed a juicy steak and shrimp feast for dinner, we grabbed our rods and headed right out in front of the camp to try our luck at the pods of fish making their way up on the rising tide. Fish could be seen rolling and jumping across the wide, flat water and it seemed like every time I threw to a surfacing fish, it was immediately on my line. A line of about seven of us had assembled along the stretch of water and at just about any time for the next two hours, at least one or two of us had a fish on. To say that our first day was a rousing success and that we were all a little bit tired from battling fish, may have been a little bit of an understatement.

Although the weather got a little tougher, the fish didn’t seem to care too much. Mornings and evenings always seemed to produce the hottest actions, but even mid-day, before and after lunch, offered plenty of fish, if your body could continue to take it! Thirty, forty and fifty plus fish days are a regular occurrence on the Egegik with a fly rod. Even the novice can do well, as although at times casting length is important, if you are able to find a channel or a rock formation that offers a holding area for passing fish, all you have to do is swing your fly through the seam and hold on for dear life.

On the fourth evening of our stay, Dave loaded four of us in his boat and we headed down river about a half a mile to a large bay. He informed us that this was an area that the fish used as they made their way up river to the lake. We beached the boat and Dave climbed up the small hill along the edge of the beach to see if he could spot any pods of fish. As he did, he would point out the area for each fisherman to cast to and in most cases after a couple of quick strips, BAM. The next hour produced about a dozen chrome-bright silvers, probably only a couple of hours from entering out of the ocean. Another great way to end another perfect evening at Becharof Rapids Camp. 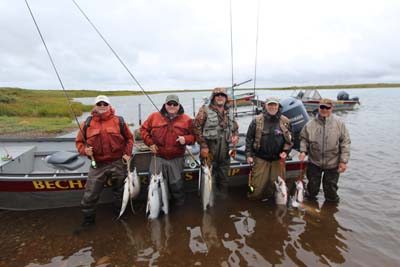 Part of our fishing group displaying another stringer of fat silvers after a great day of fishing.

Even our last morning found us making a few last casts in one of our favorite stretches of the river. Since the new group wouldn’t be getting into King Salmon until about 11:30am, five of us “volunteered” to be the last ones to be flown out, so our guide, Chris Bukowski, ran us up river and dropped us off for a couple of hours of fishing. I landed fifteen fish myself before Chris came back to get us and I know that the other guys in the group landed at least that many and probably more. Pink and orange with plenty of flash was the ticket on this day, with purples and blacks hot when the skies were darkest. And I would say that I caught at least half of my fish on the trailer fly, so if you haven’t tried the technique of using a weighted fly as your lead fly and then tying on a piece of leader about 18-inches long with a non-weighted smaller fly attached, you are probably missing out.

We are happy to have Becharof Rapids Camp as one of our highly respected, Platinum Approved Outfitters, as Dave Mandich and his staff do a great job in every way. Remember, you are in the middle of the wilderness and that is definitely part of this wonderful experience. It is always amazing to me that you can experience such a great adventure, with so many luxuries of home at your fingertips. Oh – and did I mention we gorged ourselves on steaks, lobster, crab, shrimp, ribs, salmon and scrumptious desserts – oh my! Becharof Rapids Camp, visit them on the web at www.becharofrapidscamp.com or give them a call at 360-532-7594.