Conservationists -You and Me

At the beginning of the 20th century, Gifford Pinchot, U.S. Forest Service chief and one of the fathers of the American conservation movement, developed the now widely accepted definition of conservation as the “wise use of the Earth and its resources for the lasting good of men.” According to Pinchot, the purpose of conservation is to produce “the greatest good for the greatest number for the longest time,” with sound science as the recognized tool to accomplish this objective.

Conservationists are people who support and/or engage in this approach to natural resource management. Hunters and anglers are among the first Americans to endorse the idea. Their legacy is now more than 100 years old. Through their leadership, state agencies were established to manage our nation’s fish and wildlife and to adopt laws and create programs to conserve these public-trust resources.

Arguably, Wildlife and Sport Fish Restoration programs, a key component of the American System of Conservation Funding, were the most important of these programs to be created. Through this unique “user-pays, public-benefits” system, sportsmen and women are the primary funders of wildlife conservation, providing up to 80 percent of the funding for state fish and wildlife agencies. They also financially support conservation through the purchase of hunting and fishing licenses and permits, duck stamps, firearms, ammunition, archery equipment, philanthropy and the creation of organizations, whose sole mission is the restoration and enhancement of wildlife.

Unfortunately, the tremendous contribution made by sportsmen and women toward the restoration and conservation of our wildlife resources remains largely unknown to the general public. This situation is exacerbated by the media’s broad-based use of the term “conservationist.” They are unable to distinguish between individuals and organizations that financially support wildlife conservation and those that don’t. The latter include animal rights and anti-hunting organizations, those whose funding is spent primarily on litigating resource management decisions and those that promote a preservationist “don’t touch” philosophy in wildlife management.

It is not by accident that these groups — through their interaction with the media — seized upon the term “conservationist” to cloak their preservationist, anti-consumptive use philosophy. In the 1990s, labels such as “environmentalist,” “protectionist” and “animal rightist,” became undesirable labels. These groups began the calculated adoption of the term “conservationist” in an effort to reverse the political and societal credibility that they were beginning to lose.

It is critical that we educate the American public about the fact that hunting, angling, recreational shooting and trapping are closely related to fish and wildlife conservation. In fact, it is almost universally impossible to speak of one without the other. The term “conservationist” must be rightfully applied.

“Conservationist” is a title sportsmen and women helped create, work hard to maintain and are proud to rightfully claim. They truly earned and deserve this distinctive designation.

The community of hunters and anglers must take every available opportunity to educate the American people and the media on what the term “conservationist” means, who the conservationists are and what conservationists have achieved in making this country’s wildlife resources the envy of the world.

— Courtesy of the Congressional Sportsmen’s Foundation 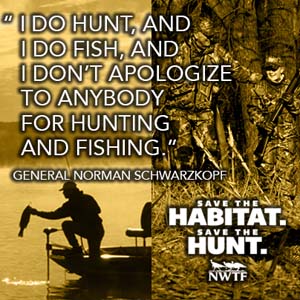 When the National Wild Turkey Federation was founded in 1973, there were about 1.5 million wild turkeys in North America. After decades of dedicated work, that number hit a historic high of almost 7-million turkeys thanks to the tremendous efforts of our dedicated volunteers, professional staff and committed partners.

The mission of the National Wild Turkey Federation is no less urgent today than when it was founded in 1973. What we do in the coming decades will be instrumental in not only enhancing wild turkey populations but also in the continuation of hunting and quality wildlife habitat for countless species.

Save the Habitat. Save the Hunt. is the NWTF’s 10-year initiative to:

We’re bringing focus to our conservation delivery by identifying areas of habitat that provide the most positive impact for wildlife.

We’re securing the future of the North American Model of Wildlife Conservation by increasing the number of hunters, who pay for 80 percent of wildlife conservation through excise taxes on guns, ammunition and more.

Because lack of access to hunting lands is a main reason people stop hunting, we’re ensuring there’s opportunity for everyone to find a place to go.

BE PART OF THE SOLUTION

The NWTF is leading the effort to solve this problem. We will see to it that the entire industry, our community, becomes part of the solution. This is bigger than any one organization and it is time we tackled this challenge together.
Here’s how you can help —

Join the NWTF now and do your part to Save the Habitat. Save the Hunt.

The NWTF is committed to raise $1.2 billion over the next decade to meet and exceed our goals. Give to the Save the Habitat. Save the Hunt. initiative and secure the future of wildlife, wild places and the hunt for future generations. For more information check out Utah’s website at www.utnwtf.org or the national site at www.nwtf.org.