Elk Hunting Deep in the Wilderness

Screaming bulls, thirty miles deep in the Thorofare Wilderness and at over ten thousand feet sounds like heaven to me. I have wanted to do a Wyoming wilderness elk hunt for over ten years. The Sportsman’s News Pro Membership Sweepstakes offers this exact hunt as one of their many giveaway grand prizes every year. I watch anxiously as they draw the winners name for the hunt and every year deflated when it isn't me who wins the hunt. I’ve shared my disappointment with Michael Deming on several occasions. Several weeks after the drawing, Michael called me and said he just might be able to get me on that hunt. The guy won the hunt is an outfitter in the state of Wyoming and would be guiding his own elk hunts at the time. He asked if I would like to purchase the hunt at a discounted price? I immediately said “yes”. The countdown was on for me to chase rutting bulls in the Thorofare.

When I met Cayla and Bill at the Historic Irma hotel in Cody, I was beyond excited to go on this adventure. Bill has been doing wilderness hunts in Wyoming for many decades. He knows his areas and how to treat a customer. We gathered all of our gear and had a quick orientation from Seth who would be my guide for the next week.

The next morning, we met at the trailhead at 6:30 loaded the horses and off we went on the 28 mile ride to our camp. This sounds like a long trip, but the breathtaking views during this trek make it go by too fast. The ride in is the most scenic ride I have ever had in my life. The waterfalls, canyons, and mountain passes are the vision most will never see without looking at an Ansel Adams print! I wish everyone could see the views on the ride in.

After full day ride, we arrived at camp. Chef Adam had hors d’oeuvres and cold drinks ready for us when we arrived. Then we were shown our sleeping tents. They were new tents with nice cots and pads on them. They also had a wood burning stove in the tent and plenty of wood already stacked in there and ready to go. We ate a great meal and went to bed dreaming of screaming bulls in the morning. 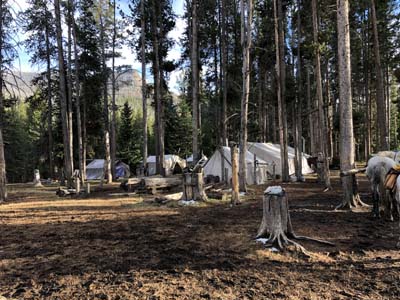 Opening morning came and I was hunting with the other hunt winner Chet. He had won the hunt the previous year, but didn't draw the tag due to the high demand for these tags. With one bonus point, he was fortunate enough to draw this year and hunt with me since we were both here because of the Pro Membership Sweepstakes. We decided that Chet would shoot the first day and then we would rotate every other day. At first light, Seth had us riding up a large meadow on horseback so we could look into the meadows below us. We took off in the dark and were in position at first light. As soon as he started glassing he spotted a herd of elk. The foot race was on as we decended the mountain to get into position to take a shot at the elk. As we got to the bottom and started calling, the bull bugled back at us immediately. As we got closer, we could see the bull coming at us through the tall jack pines. However, he would not cross the creek and commit to coming any further. We waded the creek and got in the pines. Seth called and all you could see was steam coming from the wet black nostrils of the bull. He was coming in hot! The bull stopped at 13 yards and gave us the stare down. I thought he was going to run right over us! Chet decided to pass on this lesser bull and just enjoy the experience that had just happened. We kept hunting the rest of the day, but never got another good opportunity at a mature bull. We saw some great country and had a great time chatting with Seth and learning about this backcountry wilderness types of hunting. 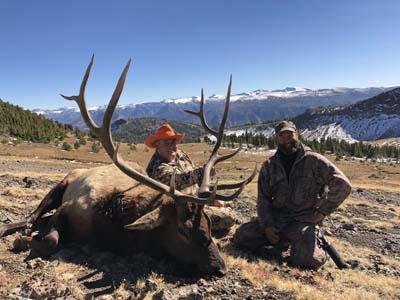 The next day it was my turn to be the shooter. As we rode up higher and higher into the wilderness my excitement was through the roof! As we came out of the dark timber and looked in the high alpine basin, I couldn't help but think this was the perfect place to harvest my backcountry wilderness elk. We called there for a while and got nothing to respond. We rode further into the basin for about an hour to try a different spot. As we were glassing Seth came over to me and said" you are going to be mad at me but there is a good bull where we were an hour ago. I said, “I am not mad, let's go get him”. We rode back the way we came and tied the horses to the last set of trees before we were above tree line. As we snuck over to where we last saw the elk, we busted them in the trees. Elk were running all around us at 15 feet, but there was no shot. We ran to the edge of the tree line and I saw the bull with his cows quickly getting out of the country. Seth cow called and I shot free hand and hit him in the front shoulder. He didn't go down right away, so I put another one in him. What a hunt! I was on cloud nine! I had just got a great bull above tree line and just as I had imagined it in my dreams. Seth and I made quick work of the bull after lots of pictures and jokes. Then Taylor and his father showed up with the mules to pack the bull back to camp. What a great team effort from everyone at Hidden creek outfitters!

The team at Hidden Creek Outfitters has once again proven why they are a Platinum Approved Outfitter with Sportsman’s News. The Pro Membership Sweepstakes will continue to offer this great back country experience so make sure you are a member so you can win an awesome hunt like this. Sign up today at www.promembershipsweepstakes.com