Statistically speaking, if you cast you probably blast. Conversely, you’re very likely to also cast if you blast. You see, there are two kinds of traditional outdoors folks in my mind; hunters that fish, and anglers that hunt. And while I’m aware that some anglers actually don’t hunt, it’s more rare to find a hunter that doesn’t at least dabble in fishing. Well, it stands to reason that if fishing is fun and hunting is fun, then hunting and fishing together makes for a really fun day. Enter the good ol’ fashioned cast-n-blast outing.

At this time of year, we’re all looking ahead at hunting seasons. Even as a professional angler, I totally get it and also find myself distracted from the joys of angling by fur, horns, and the promise of freezers full tasty, organic, and really free-range meat. But, fish are delicious too and they tend to live in places where we hunt. It seems to me, harvesting a few fish to be enjoyed alongside your wild game meals is a make-sense idea.

Furthermore, I’m also a big believer in the blast-n-blast concept. What I mean by that is mixing up your your big game hunt by adding in a bit of small game action. Here again, it leads to a more diverse freezer stash and in the same way the cast-n-blast adds interest to an outing, so too does the pursuit of small game. When your big game hunting is slow, some action goes a long way.

Since we’re headquartered in the West, we have some great options available for both concepts. One that I really enjoy is mixing some brown trout action into a big-game hunt. Browns are in some level spawn phase during most big game seasons, meaning they are beautifully colored and very aggressive. In a lot of areas of the West, they populate rapidly as well, so selectively harvesting a few can be good for the fishery. Like all wild trout, they are very tasty. If you’re hunting near a larger river drainage (think, Colorado, Arkansas, Platte, etc) or any of a range of reservoirs and pothole-style lakes, brown trout are a great option.

An even better trout option from the standpoint of fishery management and also general fall catch-ability is the brook trout. “Brookies” can be found in mountain streams throughout classic big game country and they too are fall spawners and subsequently colored beautifully. The best part is that they reproduce to the point of overpopulation in many places, meaning that harvesting a few, or possibly even a bunch of them, is usually good for the overall health of the streams they inhabit. That same population density also makes them aggressive feeders, which is another way of saying very easy to catch.

For opportunity trout fishing as described, a multi-piece pack rod like St. Croix’s Triumph Travel Series is a good choice because it breaks down for easy packing. Pair it with a small Abu Garcia Cardinal S spinning reel spooled with six pound test Trilene Braid or Fireline. Gather up a few tiny tube jigs, inline spinners, and maybe a small floating plug and get to catching. If you’d rather fly fish, your rod probably already breaks down for packing. Simply grab a few small, old school sparse streamers like a Mickey Finn and swing away.

If you plan to eat your fish in camp, recipes are limitless. I favor a classic foil-wrapped whole fish with a bit of butter and lemon and S&P for simplicity. Keep in mind these will be extremely fresh and wild fish; so long as you don’t overcook them, it’s hard to go wrong. 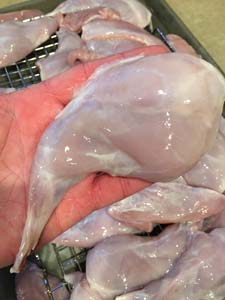 Since my big game hunting is mostly high plains-based, my personal favorite blast-n-blast is mixing in some cottontail hunting. We’ll take a mid morning break from glassing for horns to spot sunning bunnies. Since they are stationary, I can shoot them with no meat damage making for perfect food quality. Rabbit is very delicate in flavor and super versatile. Prepare it in lieu of chicken in almost any recipe, making for a nice change up from venison dishes.

Another good (and quieter!) blast-n-blast option is harvesting grouse while bow hunting deer or elk. An arrow or two in your quiver tipped with blunt or judo points is perfect, and flu-flu style vanes help too. Grouse have fairly potent lean dark meat so I typically season robustly, add a bit of flavorful fat (bacon grease works well), a touch of liquid (wine perhaps), then foil-wrap and roast.

A few items will help if you plan to take your bonus fish or game home instead of eating it in camp. I carry a separate smaller cooler dedicated to the bonus meat. That way, I don’t worry about cross-contaminating my daily lunch/dinner/snack food cooler with, say, freshly cleaned rabbit. I pack a few plastic bags to keep meat dry from any ice that may melt as the flesh cools and a smaller/fillet knife to clean my small game/fish. That way, my deer processing/caping/boning knives are clean and ready should I punch my tag.

A little bit of forethought and planning can really add some excitement and diversity to your hunt, not to mention food to your freezer.