Alaska has been described in many ways over the years, with "The Last Frontier", "Land of the Midnight Sun" and "An Outdoorsman’s Paradise" just a few of its catch-phrases. But after traveling around its massive expanses for the past 15 years, I think I have come up with a simple one-word phrase that will do the job as well and that word is simply, ‘Amazing’!

With its expanses seemingly almost endless, no matter the area that you visit, it is truly like stepping into another world. Its colorful contrasts offer the eye a non-stop spectacle of excitement and its adventures, well, let’s just say they are pure fantasy, dare I say the perfect example of “What Dreams Are Made Of”.

I get asked all the time, “What part of Alaska is your favorite”? Well, to be honest, I really can’t give a definitive answer. I truly love all of it. Each area holds a different and magical intrigue, but each will also open your eyes to a whole new world as well. 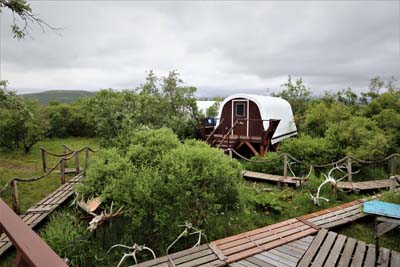 The main camp is comprised of raised, insulated, cabin tents that sleep two and are complete with carpeted hardwood floors, thermostatically-controlled propane heaters, lighting and most updated with their own bathroom.

Here at Sportsman’s News, we are always looking for new and exciting places to visit and it is my job (cough) to search those destinations out, especially in Alaska. My focus for the summer of 2018 was on the western side of the state, to a river that I had heard a lot about but had never visited – The Goodnews.

Located about 425-miles southwest of Anchorage, the Goodnews River’s three forks start in the Ahklun Mountain range, with the braids eventually joining a few miles from its final destination, the Bering Sea at Goodnews Bay.

The Goodnews River Lodge was born back in the early 1970’s and was then located about 40 miles upriver from the bay. An aspiring river guide named, Mike Gorton, landed a job at the camp in the late ‘80’s and in 1996, with the help of a good friend and his family, purchased the lodge and now 22 years later, the Goodnews River Lodge has evolved into one of the best salmon and trout destinations in Alaska.

Mike knew that the first thing that he needed to do when he took over the camp was to relocate it. The original location was some 40 miles upstream, requiring long boat trips each day to reach many of the best fishing locations. The process quickly began to move the camp down to basically, the confluence of the three forks, about 7 miles from Goodnews Bay. By doing this, he would be able to access all three forks of the river, simplifying the travel time to the best stretches of the river, while taking advantage of the offerings of each braid. Hence, the present day Goodnews River Lodge. 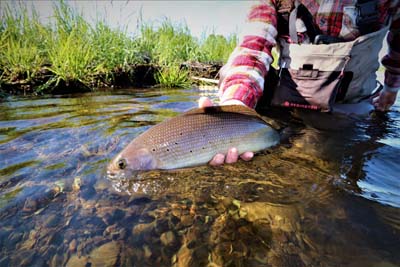 The south fork of the Goodnews is the place to chase after big Arctic grayling.

Both the main and north forks of the river begin with their headwaters in lakes in the Ahklun range, part of the Togiak National Wildlife Refuge, while the south fork is formed by small tributaries and springs, with no lake as its source. Because of this, most of the five salmon species that come into the drainage are found in the middle and north forks, with the focus of the south fork, trout and Arctic grayling. But because of these distinct forks, a great opportunity for diversity is created offering guests in reality, a uniquely different and exciting adventure every day of their stay.

Your adventure starts in Anchorage on Tuesday night. You will need to book an over-night stay at a local hotel in order to be at the Trans Northern Airlines desk, located on the baggage level at the main terminal, by 8am. You and your gear will be weighed and checked-in for your chartered flight to Goodnews Bay. At 9am, weather permitting, you will then load into your awaiting plane for your scenic, two-hour flight. Upon arrival at the small air-strip in Goodnews Bay, you will be transported the short distance to awaiting, covered boats and then off on your 10 minute ride to the camp.

Once at camp, your bags will be taken to your living quarters (raised, insulated, cabin tents that sleep two), complete with carpeted hardwood floors, thermostatically-controlled propane heaters, lighting, and most updated with their own bathroom. Your waders and boots can be stored in the drying room, centrally located in camp and equipped with enough pipe dryers for everyone's gear at the end of a long day on the water, no matter the weather conditions. Then its off to the main eating cabin for hot soup and a sandwich before hitting the water for your first afternoon of fishing. 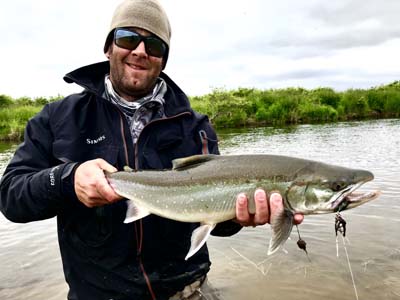 Steve McGrath is all smiles as he hoists a big sea run dolly on day five of our adventure.

Our first afternoon found us with guide, Jan Stewart. Jan actually grew up and still lives in Goodnews Bay and knows the river like the back of his hand. We spent the afternoon fishing for kings, both a mile above and below the camp. A total of 10 brightly colored salmon, ranging from 10 to 25 pounds came to the boat, as fellow Pro-Staffer, Steve McGrath and I were able to land a few on both fly rods and spinning tackle. Orange Mepps spinners were effective casting and swinging, as well as Dolly Llamas on our 9wt. fly rods. Jan also put us in position to do a little stationary back-trolling, with Wiggle Warts and Quikfish. At 5pm, we headed back to the lodge for appetizers and the first of many great meals during our stay.

Day two found us with guide, Kyle Schmeddiky, chasing sea-run Dolly Varden on the north fork. My 6wt. St. Croix Bank Robber was the perfect weapon for these great sport fish. Small streamers did the trick along ripple lines and cut-banks. The biggest of the day was a beautiful 32-incher, a little on the slim side since the kings, sockeyes and chums had not started to drop their eggs yet, but still a great fight on lighter tackle. Along the way, we also hooked into a bunch of chums and found one hole that held a bunch of ‘Jacks’ (smaller, second year king returners to the river) that put up a great fight.

Day three again found us in search of kings. Our guide, Johnny Napolatono, considered the expert when it comes to kings on the Goodnews, quickly had us on big fish. Steve had the hot hand on the trolling rod as I found my groove swinging a pink articulating leech. Over a dozen kings, from 12 to 30 pounds again found their way to the boat, with nearly half of them slamming my feathered offerings. We also stopped off in a couple of places to chase a few sockeyes and chums before heading back for a great dinner, complete with fresh salmon and pork loin (dessert wasn’t too bad either).

Our fourth day on the Goodnews would be on the south braid with 15-year veteran guide, Jeff Arnold. Jeff’s specialty is trout and Arctic grayling and he goes after his prey with streamers, dries and skating mice patterns. To say that Jeff is pretty good with a mouse would be an understatement. As he instructed Steve and I on the rippled runs of the river, he also masterfully displayed the art of moussing to our wondering eyes. It was truly amazing as he softly landed his foam offering on the water and then proceeded to twitch and glide it like a professional ice skater. Our day was full of hoots and hollers, as big Dolly Varden and giant Arctic grayling (I don’t think we landed one under 20-inches) kept us busy on the pristine waters of the south fork of the Goodnews. 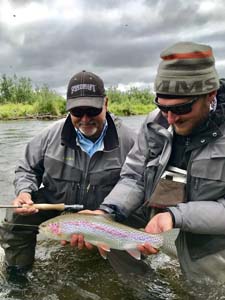 Kent Danjanovich and guide, Alex Kumiski, display a colorful rainbow from their day on the north fork at the Goodnews River Lodge.

Days five and six were full of more salmon and dolly’s, as guides Alex Kumiski and Steven Cratty each worked their magic before our wondering eyes. It always amazes me that guides are able to inject their own special touches to a stretch of water, with no two working it the same. During one magical stretch on day six, I was able to hook into three kings in four casts on my fly rod. I set the hook on the first one at the end of my swing, as it quickly came to the surface before going on a screaming, non-stop run that didn’t slow down until the backing on my reel was nearly gone. I gently thumbed my Redington to stop my kings’ momentum, resulting in a loud snap. Luckily, I was able to retrieve my line, but found that the hook on my articulating leech had not faired so well. 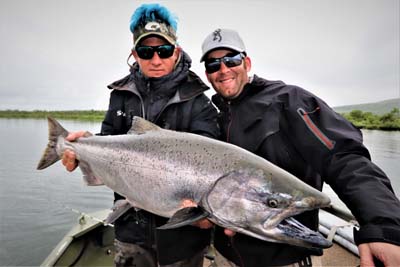 My next two fish, a chrome bright 18-pounder and the biggest one of our trip, a slightly blushed 30+ pound specimen, finished out our day and left us wanting more as we headed back to the lodge on our last evening. Thick, juicy, perfectly cooked prime rib slabs awaited us with all the fixin’s as we mingled with the other guests as we traded tall, but surely true, stories of the days’ events.

Well as you can see, Mr. McGrath and I came away from our maiden trip to the Goodnews River with plenty of great memories and big smiles on our faces. And as if our days weren’t filled with enough action, we even headed out of our cabin almost every night to work over the migrating chums and sockeyes just a couple hundred yards upriver from camp. Yes, the Goodnews is a special place and I guarantee that we will be back to partake of its magic again soon. In fact, they will be part of our Pro Membership Sweepstakes in the future, as we will be giving away a trip for two to join me on a return visit in 2020. We are proud to welcome Mike Gorton and his Goodnews River Lodge (989-786-5570) to our family of Platinum Approved Outfitters and Lodges. They fill up fast with returning clientele, so you had better get on the phone right now to see if they just might have an opening for you!