I’m sure you have heard the familiar line, “Membership has its privileges.” Well, it hit me a little bit closer to home when Mike Deming gave me a call early in the spring of 2015 and informed me that I was the lucky winner of the Itcha Mountain Outfitters black bear hunt as part of the Sportsman’s News Pro Membership Sweepstakes. My history in drawing out for anything was not a good one, so it was a pleasant surprise to find out that I had won a trip to British Columbia for a chance to take a big black bear.

As I contemplated who to take along with me on my hunt, it hit me, “This would be a great opportunity to take my grandson, Dakota, along on the hunt, to spend some quality time with him and give him the chance to experience what most 14-year-olds only dream about.“ Mike Deming was also supposed to accompany us on the trip, but he called and mumbled something about not having a current passport or something like that. I gave Stewart Fraser a call, the owner of Itcha Mountain and he agreed that it would be a great adventure for myself and Dakota. We worked out the price for Dakota’s hunt and the dates were set for our arrival the last week of May, 2015.

To say Dakota was a little excited would definitely be an understatement. And to top it off, I picked him up on his last day of the school year in Colorado and then headed over to his house and we started to round up everything he would need for the trip. We would be driving, so we had the luxury of having plenty of room for all of our gear. The next day we drove back to my place in Billings, Montana, to grab the rest of my gear and then we hit the road the next morning for Canada.

Our first night found us in Canmore, Alberta. The next morning, we headed to Banff and then we took the high road to Prince George, British Columbia. Unfortunately, our journey to this point was full of rain, rain and more rain. But, with such gorgeous surroundings, it didn’t seem to bother us too much!

Along the last leg of our drive to Prince George, we spotted a young black bear cub along the side of the highway, gnawing on a road-killed calf moose. Dakota and I got a kick out of watching the little guy work over the carcass with all his might. We continued on our journey and after a night’s rest in Prince George, we arrived at Itcha Mountain Outfitters base camp the next day.

Stewart and Sabrina were both away from the lodge when we arrived, but we were greeted at the door by one of their staff and soon we were settling into our room that would be our new home for the next few days. After dinner and a good night’s sleep, we met up with Stewart at the breakfast table the next morning and he filled us in on what would be taking place during our stay. We then secured our licenses and started to get our gear together for our first evening’s hunt. 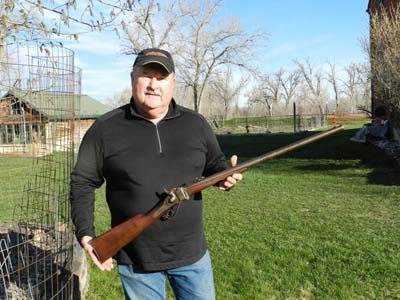 Lucky winner Doug Dolph shows off his legendary Sharps 40/90 rifle that he hoped to use in harvesting his trophy bear.

It was decided that Dakota would be the first shooter. Since this was his first bear hunt, I thought it only fitting that he should be the first to feel the rush of pulling the trigger on a big Canadian black bear. On this trip, he would be using a .300 Win Mag and I would be trying to take my bear with a 40/90 Sharps, a legendary rifle from days gone by.

Here is a little side note about my choice of weapon. I am the secretary of the Sharps Collector’s Association and I truly have a passion for the legendary line of firearms. The rifle that I had with me on this trip was owned by the McGuire family in Missouri and was shipped from the factory on April 23, 1875. The McGuire brothers used it to shoot buffalo for the railroad and mining camps to supply meat for their workers over the next few years, in Montana. They ended up wearing out the barrel over time and it was eventually replaced and resized from the standard, 40/70 to a 40/90 caliber. I was able to pick it up from a gun collector a few years ago, who knew of my passion for the Sharps rifles.

Our first evening found us driving the logging roads of the area in Stewart’s Suburban. After an hour or so, we came around a corner and Stewart spotted a bear in the distance on the side of the road. We continued on, past where we had spotted him and we then quietly got out of the Suburban and slowly worked our way back towards the bears’ last position. Finally, he popped back out of the brush and Stewart whispered, “Good bear”. 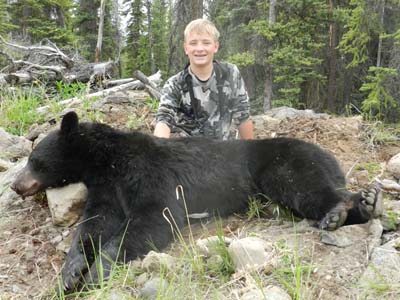 Dakota Dolph was fortunate enough to have a grandfather willing to give him an opportunity of a lifetime by taking him to British Columbia. Stewart Fraser (owner/outfitter) got him an opportunity early in the hunt at this whopper bruin and he connected.

Dakota quickly took aim with his .300 Win Mag and slowly squeezed the trigger. His shot from about 60 yards was right on target and at impact; the bear leaped about 20 feet and landed on the other side of the dirt road, dead in his tracks! As Dakota approached his sleek beautiful black bear, his excitement and smile were something that gave his granddad the most gratifying sense of fulfillment. This young man had now become a “Hunter”. After the customary high fives and plenty of photos, we loaded the bear into the back of the Suburban and continued our first night’s search, now for my bear. We did manage to spot one more bear that night, but it wasn’t of the caliber that Stewart had in mind for us.

Day two again found us driving the logging roads of the area, with another bear or two spotted, but one was on the smaller side of things and the other, rubbed a little bit too much for Stewart’s liking.

Our third evening again found us roaming the roads of the area. It didn’t take us long to spot a good bear rumbling down the side of the road. Stewart immediately knew that he was a good one. The only problem was, smoke and steam started filtering out of the sides of the hood of the Suburban as we quickly pulled to a stop. As we popped the hood, we found it to be just overheating and luckily nothing more serious. 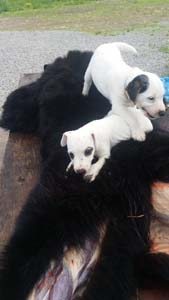 Jack Russell Terriers are the preferred choice of tracking dogs by Stewart Fraser and getting them involved with the bears early in life is a great way to create future trackers with passion.

A quick look back down the road gave me a view of the same bear back out on the side of the road. Stewart mumbled, “Holy Cow that is the biggest bear I have ever seen!” I quickly grabbed my iron sited Sharps and headed down the logging road toward where the bear was feeding. I then realized that I didn’t have my glasses with me, but with only a few seconds to take the shot, it was now or never. I squinted as I looked down the barrel and through the site at its end and then pulled the trigger. But alas, my shot sailed over his back and he rumbled back into the brush.

To say that I took some heat from Stewart for the next hour about missing the biggest bear he had ever seen, would be another understatement. But, luckily just before dark, as we drove by a clear-cut area, we spotted another nice bear. We parked the Suburban and started our stalk. And for good measure, I had changed over to my .338 Mag, complete with scope to compensate for my absence of spectacles.

As we popped out along the side of the clear-cut, we found our bear still feeding, with no apparent knowledge of our presence after a ¾-mile stalk up the clear-cut on the logging trail. Within range, I quickly lifted my rifle, took aim and pulled the trigger. My shot from about 100 yards was true and down he went. Stewart told me to give him another one, but I knew that he wasn’t going anywhere, he never moved. 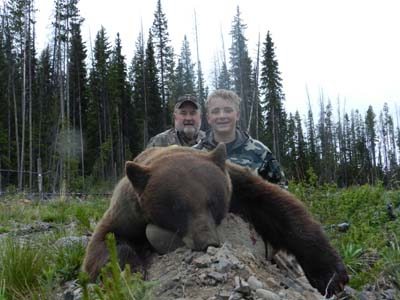 Doug Dolph and grandson Dakota were fortunate enough to share time in the woods and harvest two trophy bears. Color phase bears like this one are common in this area of British Columbia.

As Stewart and I admired my beautiful, cinnamon, color-phases bear, Dakota ran back to the Suburban and grabbed a tarp. We then rolled the bear onto the tarp and drug it back down the hill and loaded it in.

That night, Stewart took care of my bear back at the lodge and measured both mine and Dakota’s trophies. Dakota’s measured out square at 6’11” and mine at 6’9”. Both my cinnamon bear and Dakota’s pure black bear showed no signs of rubbing, truly trophies that will be with us forever.

I’d like to thank Stewart and Sabrina Fraser of Itcha Mountain Outfitters (250-249-5424) for a great adventure. I would also like to thank the guys at Sportsman’s News for the great opportunity of being part of their Pro Membership Sweepstakes. It is by far the best $300 I have ever spent becoming a member and if you aren’t part of it yet, you are missing out, big time! And of course, the best part of the whole experience was spending time with my young grandson, sharing the part of my life with him that has meant so much to me in the great outdoors.