As soon as we announced a new store in Juneau, Alaska, I knew this would be a grand opening I would attend and take advantage of a few vacations days for fishing. I have been fortunate to visit Alaska several times and with each trip, the fishing has been wonderful. This would be my first time in Juneau, and I had always heard the fishing was good. In researching charters and checking with friends, I found that most operations catered to week long trips with lodges. A few day-charters showed up with a Google search, but with very mixed reviews. Best Damn Charters had glowing reviews and after a few calls to my network of industry people, it showed that Duane Cummings (owner) was as good as it gets. Though several months out, I called Duane and I booked two days of fishing for myself, my husband and my son.

As the departure date approached, we checked the weather and determined it best to bring our rain gear and rubber boots. Though our flight was delayed out of Seattle and arrived at 1 am, we were excited and ready as we headed to the marina at 7:30 for our 8 am departure. 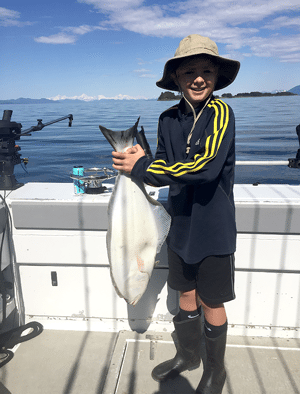 Jonathan shows off his halibut on day-one.

As we reached the dock, Duane, Nick, and a few more of the crew met us and with brief introductions, we headed off on the Endeavor with Nick as our captain and Joe our first mate. It was a little rough on the way out, but by the time we reached our spot, we had sunny skies and calm waters. Nick had a great game plan as to where he wanted to fish, having past success in the area.

After completing all necessary licensing paperwork, we soon had lines in the water. It was great that Nick helped us understand the average halibut is around 15 to 20 pounds since most photos you see on sites are well over 100 lbs., especially given one of our buyers last year landed a 466-pound halibut. With our herring on the hooks, the bites started to occur. However, the landing-to-bite ratio was not so high. Nick and Joe were very helpful with the technique on setting the hook and reeling in.

After a few more minutes, Jon hooked a halibut and got it aboard. The first one was about 15 lbs., though not huge, but as I have learned with hunting, never pass on the first day what you will shoot on the last, which for fishing translates to we are keeping it. This got us off the schneid and started the competition. In addition to halibut, Nick mentioned we may also catch rock fish and cod. 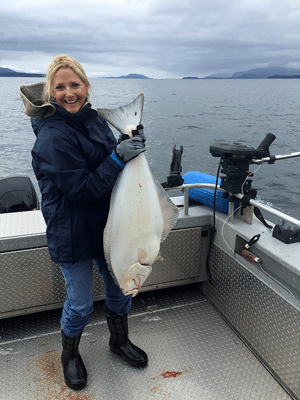 Karen Seaman with her hefty halibut caught on the second day of the trip.

Jonathan and I now had our halibut to land and Jon was onto rock fish and cod. Johathan was the next one to land his halibut. Finally, after missing about five, I finally hooked a halibut. Nick knew instantly by the bend in the rod it was a halibut. As I struggled to reel and make the transition to the rail, I was certain this was a huge halibut. My biceps burned as I reeled and reeled, but upon getting it into view, we found that it again was about 15 lbs. I came to the conclusion that if I hooked anything much larger, I would not be able to get it into the boat!

The day was absolutely beautiful, so we enjoyed the weather and great views as we then spent a little more time catching some rock fish.

With our halibut tags filled, we headed for some salmon trolling. On the way, we saw numerous pods of orcas, some humpbacks, seals, and otters. We transitioned to downriggers and started to troll along a shelf. Before we started, Duane let us know that salmon fishing had been tough and the season thus far had not been good. After such a great day of halibut, we were not too concerned, but thought it was worth a try. As the day came to an end, we had a hit on the line, reeled it in and had another rock fish, so all was not lost.

On the way in, Nick showed us many points of interest and again more pods of orcas and though beautiful, they might have explained the lack of salmon in the area. As we docked, Nick and Joe cleaned our fish and dropped them off for processing and packing. We all three looked forward to the next day, with the chance to experience it all again, with anticipation of another successful day. 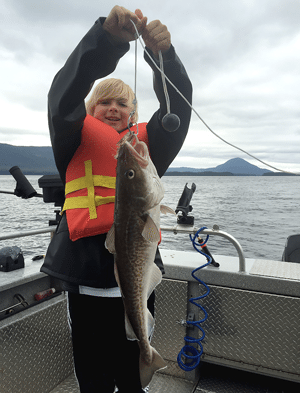 Jonathan with one of the many cod he caught with Best Damn Charters in Juneau.

Friday morning started Day 2 of our fishing adventure, with the weather more as expected – cloudy skies and rougher seas. We met Captain Duane and Taylor at the dock and we soon headed out on the Endurance. Due to higher seas, we headed to an area more protected. Captain Duane had a good spot picked out for us, with hopefully a few larger halibut. We dropped our lines in about 190 feet of water and began to jig. Though bites were occurring, the hooking was still not 100 percent. Jon again was first to hook a halibut and again, since this was the first of the day, we kept it and continued to fish. Jonathan then became the cod-slayer and proceeded to reel in four nice ones.

I next hooked what I thought was going to be a nice halibut, but as I struggled to bring it up, we soon found it to be a "double ugly" or that is at least what Captain Duane called it and it certainly matched its name. We tossed it back and I was then able to catch a nice cod. Jon caught two more and then our focus drifted back to halibut. Captain Duane decided to relocate to another spot he had marked on his GPS. 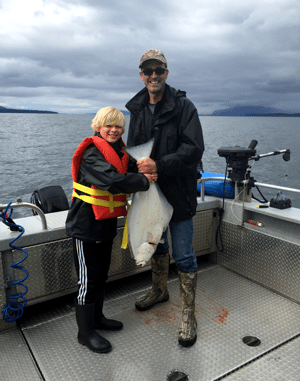 Soon our lines were back in the water and again the tap, tap, taps began. I put on a fresh herring and began to jig. All of the sudden the bites became stronger and I set the hook. This one was a halibut and I knew it was much larger than the one from the day before. As I began to reel and struggle, I called for assistance to make the transition to the rail as I kept reeling, making sure I kept tension on the fish and no slack line. What felt like 10 minutes, though really only about two, my halibut finally appeared and we got it in the boat and it measured about 38 inches. The hard work paid off. Two down and one to go for Jonathan. After about 10 minutes, Jonathan caught his halibut and it was off to trolling for more salmon. Again, the trolling was not too successful, but we certainly had fun trying. As we reached the dock, we had three more halibut and seven cod to take to the processor.

Our fishing trip to Juneau was certainly successful, thanks to the Best Damn Charters and Captain Duane and Nick who knew the locations to take us to and be successful no matter the conditions. My next trip to Alaska will certainly be a stop in Juneau to our new Sportsman’s Warehouse store along, with a day of fishing with Captain Duane and Best Damn Charters (www.bestdamncharters.com).