King Salmon and Lots of ‘Em

When a conversation is struck about Alaska, I can almost guarantee that before it’s over, there is a pretty good chance that the topic will eventually include fishing for salmon. Yes, Alaska and salmon fishing are married at the hip – and for good reasons.

Many areas of Alaska sport good returning salmon populations, but the premier area for the biggest returns is the Bristol Bay region. The inshore run in 2015 was estimated at over 58,000,000 returning salmon, well above the 34.2 million yearly average for the drainage. Yes, salmon numbers seem to be on the rise and that’s good news for sport fishermen and women looking to visit Alaska in hope of landing that fish of a lifetime. 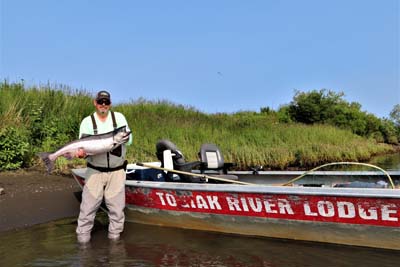 Sportsman’s News Pro-Staffer, Rick Rosenberg displays another great king salmon along the shores of the Togiak River in the Bristol Bay region of southwest Alaska.

Now, although a big percentage of the above numbers are represented by sockeye or red salmon, the Bristol Bay area is also home to some of the very best Chinook or king salmon rivers in the state. One of those rivers is the Togiak, a shortish river by Alaskan standards at about 55 miles in length, with its last 5- to 8-miles tidally influenced. This somewhat lesser known fishery hosts one of the very best king salmon runs in the state and with unbelievably low numbers of fishermen, is able to boast double-digit numbers of hook-ups per fisherman daily, unheard of numbers for all but a handful rivers in Alaska.

You would think that a river with this kind of reputation would be over-run with fishermen and the lodges to accommodate them, but in reality, there is only one permanent structure lodge on the whole river and of course that lodge, the Togiak River Lodge, is one of our favorite operations to make a visit to whenever we get the chance.

The Sportsman’s New Team first visited Larry Lund and his Togiak River Lodge back in 2010, with the results nothing short of spectacular. Now seven years and three visits later, it is easy to see why they are part of our prestigious Platinum Approved Outfitter and Lodge family because they truly deliver on what they advertise – a pristine Alaskan wilderness setting, great service, wonderful accommodations and food and oh by the way, possibly the best king salmon fishing in Alaska!

First let’s talk a little bit more about the ‘king’ of all salmon, the Chinook.

Kings spawn in fresh water and for eggs to develop properly, the water must be cool and clean, as well as oxygenated and free of sediment. It’s also essential to have vegetation cover so that the young fish have places to hide and shade to keep the water temperature low. Estuaries, therefore, make the ideal spawning spot, since the wetlands around estuaries filter out pollutants and the Togiak fits this bill perfectly. 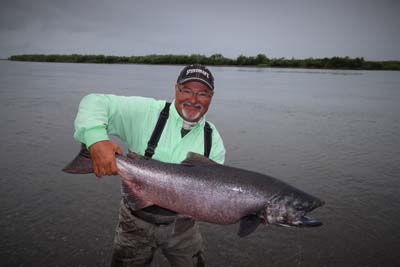 Kent Danjanovich with one of the best kings of the week, a great 30+ pound cromer on the Togiak River.

King salmon are unique in as far as they spawn only once in their lifetime. On average, king salmon spend three to four years in the ocean (though sometimes it’s as little as one or as much as eight) before returning to fight their way upstream to spawn at their home rivers. It’s often a long, grueling journey of thousands of miles, much of it spent battling currents and fishermen. The salmon that reach their spawning grounds make up for the ones that don’t make it by laying about 15,000 eggs each. Of course, only a fraction of these will result in salmon that reach adulthood themselves. Once the eggs hatch, the salmon will do one of two things: Ocean-type king salmon head for the Pacific during their first year of life and stream-type kings spend a year or two in freshwater before swimming out to the deep sea. They spend about five years in the ocean before returning to spawn and dying.

Below is a chart of facts on each salmon species:

The Togiak River Lodge is truly one of the very best king and silver salmon rivers in Alaska. With the king season beginning around the 20th of June, the first of the king run begins to enter the river. With the lodge sitting just six miles upstream from the bay, a good morning push on the tide can result in hundreds of kings pushing through this stretch. The experienced guides at the lodge will incorporate the best techniques throughout your day on the river to make sure that the action is literally no-stop on most days. 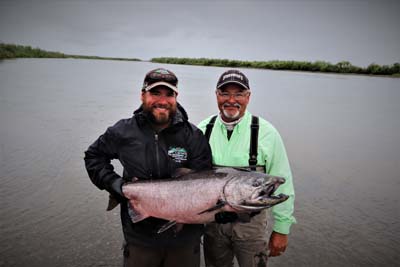 Guide Zack Larsen and the author are all smiles after Kent made it into double digits on day two at the Togiak River Lodge.

During our week of fishing July 12th – 17th, 2017, our guide, Zack Larsen had myself and fellow Pro-Staffer, Rick Rosenberg on big numbers of fish every day. In fact, we caught so many kings by noon each day, we took the time in the afternoons to chase sockeyes, chums, rainbows and Dolly’s. We landed over 30 kings between the two of us on our third morning alone, with the biggest a nearly 40-pound bruiser!

Our five days of fishing resulted in over 100 kings coming to the net, ranging from a few jack’s (second year fish returning to the system) to a handful of true trophies, hoovering between the 35- and 40-pound mark. Yes, you could say we had a pretty spectacular week of king salmon fishing.

The 2017 sockeye run for the area was nearly five times the normal run, so we were even able to fill up our fish boxes with tasty fillets of reds as well. And it was a blast going after rainbows and Dolly Varden a few miles above camp, as Zack had us using both fly rods and spin cast outfits, with both resulting in fish from 15- to 22 inches.

As you can see, the Sportsman’s News Team has nothing but good to say about the Togiak River Lodge. Larry Lund and his staff go to great lengths to make sure that your stay is as enjoyable as possible. And if the fish are cooperating (which they usually are) your trip will be full of the ‘catching’ side of fishing, making this venue a great place for first-time Alaska visitors and seasoned veterans alike to experience what Alaska fishing is all about. They have a big following of return clientele, so you had better get on the phone right now, 503-784-7919 (October – May number) to see what dates are available for the upcoming season. If you are looking for a great Alaskan fishing adventure, look no further than the Togiak River Lodge!