As most of you know, taking a mature bull elk with a bow and arrow is quite possibly one of the hardest yet most rewarding accomplishments in the sporting world, and to me, growing up a poor farm boy on the east coast, to say it was a dream would be a gross understatement.

I was raised by a family of hunters; so naturally, Sunday nights consisted of “Amen” followed by a hearty meal and the Hunting Channel. I couldn’t get enough of it, I wasn’t into football or hockey, I had elk on the brain. So, at the age of 18, I packed my bags, loaded my truck and headed west.

I soon found myself living in Fort Collins, Colorado, which rests in the foothills of the Rocky Mountains. My first couple of years hunting elk had about the same success rate as if I had been hunting Sasquatch or old Nessie herself. Apparently, public land elk are a little spookier than the ones I had grown up watching on TV. This was also during a time period when maps were still on paper and the internet was being dialed up through a phone line.

Over the next of couple years, I had some close encounters; both of my brothers and even my father were able to notch tags on the elusive Wapiti, but not me. After 5 years in Colorado, I decided to move even further west to Missoula, Montana.

My first fall in Montana came with some close calls and even though I wasn’t able to connect on one, two of my friends did, bumping my pack-out ratio to 6 and 0.

I immediately fell in love with Montana and knew I was in the right place, but life had other plans for me and in the winter of 2007, I came down with a mysterious illness. Six months later, I was diagnosed with Lyme Disease. To make a long story short, I spent the majority of the next 10 years moving from state to state for medical treatments, doctor appointments, or just sick in bed.

By the summer of 2018, I had gotten a lot of my symptoms under control and I had started working again, so naturally I decided it was time to move back to Montana. After all, I still needed to check that bull elk off my bucket list. By August of 2017, I was once again living in the Treasure State, but there was only one problem, I wasn’t a resident and I couldn’t afford a non-resident elk tag. The cost of the move combined with old medical bills had my accounts in a major drought. So, for an early Christmas present, my amazing mother bought me the $900 tag. She knew how much it meant to me and all she said was, “You better kill a big one.”

September came and with it, the crisp cool nights and quaking of the aspen leaves. Having been gone for so long and with such little time for scouting, I called an old friend from my first go-around in the state and coincidentally, he had just moved back to the area too. Two weeks later, we were headed east of Missoula to a spot my friend had found on a map. Neither of us had been there before but it looked good and definitely warranted a scouting trip.

We had just turned on to the dirt road that would lead us to the spot and right there in the road was a fresh pile of elk droppings. Taking that as a sign, we pulled off, grabbed our gear and headed up the mountain. We were gaining elevation quickly so when we reached a bench with a good vantage point, we stopped to take a break.

Within seconds of stopping, my buddy slowly raised his hand, pointed his finger and whispered the word “elk”. Slowly we crouched down and to our complete surprise; we had just stumbled right into the middle of a herd of bedded elk. We were actually too close, so in fear that they would smell us, we belly crawled back down off the ridge and around to the side in an attempt to get downwind of them.

After glassing about 20 cows and calves, we put some more distance between us and them, I made a couple soft cow calls and a bull let out a good bugle. Almost immediately, bugles began to erupt from all over the mountain.

The closest bull had a certain irritation in his voice and we knew he was coming in for a fight. We quickly spread out on the hillside and a minute or so later, he bugled again, this time he was just out of sight. A few more moments passed and then there he was. I could see him moving towards me through the timber. When he had closed the distance to about 30 yards, I drew my bow, anchored my pin and let the arrow fly.

A loud “Thwaack” rang out through the trees and to my horror, the arrow had struck a small pine tree and stopped dead in its flight just a few feet from hitting the bull. The bull immediately ran down the hill and then turned back around to see what had just happened.

Unfortunately for him, he stopped broadside in front of my friend. Another loud “Thwaack” echoed through the woods and needless to say, I was now packing out bull number 7 without ever notching a tag. I was elated for my friend but I have to admit, I was tearing myself apart inside for missing that shot. It was around midnight, and we were still packing out the last quarters of my friend’s bull when we stopped for a moment to rest.

I will never forget this, my friend looked at me, then looked up to the sky and said, “the stars sure are pretty tonight”. Still beating myself up inside, I just looked up and thought to myself, it would be a lot easier to enjoy the stars if I were packing out my own bull. He must have read my mind because he then looked back at me again and said, “don’t worry man, we are coming back in here again next weekend”. I don’t think he could see me in the darkness, but my smile was touching my ears.

Six days later, we were back at it again. This time was even better. Somehow, we had found ourselves surrounded by screaming bulls. Thirteen years into my quest to kill an elk and here I was, smack dab in the middle of 4 different bulls, the wind in my face, and my good friend calling for me. It was an experience that I can’t easily describe. I felt like one of those professional hunters on TV.

The sun was starting to set and one of the bulls was getting close, so I ran as fast as I could to the nearest cover. My knees had barely hit the dirt when he bugled again. He was just out of sight and I knew he was coming, so I slowly dropped my pack and melted into the underbrush around me.

A few moments passed and then there he was, a big mature monarch of the mountains. He materialized up out of the dark timber like a ghost from darkness. He was making no sound as he closed the distance. 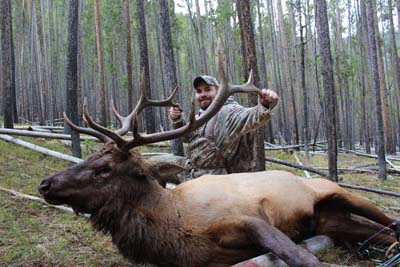 The big bull walked right to the edge of the timber and stopped, I could see everything but his vitals, it’s as if he knew right where to stop. I could see his long main beams, the drool dripping from his mouth, and the steam from his breath rising in the cool crisp air. And I sat there motionless, as the last rays of sunlight slipped from the pines and I watched as the big bull tilted his head back and let out an ear-piercing bugle.

I asked the Creator to let him take just two more steps and after what felt like an eternity, he did. I drew my bow and held my breath to compensate for the uncontrollable shaking, lowered my 40-yard pin behind his shoulder and let my arrow fly. The arrow struck the big bull perfectly behind the shoulder with almost no sound at all. Just as quickly as he had appeared, he disappeared back into the darkness.

An hour later I found myself sitting in the darkness with my good friend Zach on my left and my big 6x6 bull elk laying on my right. With a smile on my face, I wiped the tears from my eyes, looked up at the sky and said to Zach, “the stars sure are pretty tonight!”