I’ve gone on a major hunting trip every autumn for nearly the last 20 years. The adventures are a means of recharging my batteries prior to the long, cold, New England winters. Sometimes I’ve gone for caribou, sometimes for Maine whitetail deer, and even once for Newfoundland moose. But nothing was planned for the fall of 2018. Or so I thought.

The phone rang one mid-October morning and my friend, Carroll Ware of Fins and Furs Adventures in Skowhegan, Maine was on the other end of the line. He’d been invited by the largest outfitter on Anticosti Island, SEPAQ Anticosti, a Quebec government sponsored outfitter, for a week of deer hunting and business discussions prior to Fins and Furs becoming SEPAQ’s U.S. sales and booking representative. The good news for me was that Carroll could bring a guest. I didn’t need to be asked twice. After some fast schedule changes and appointment shuffling, I let Carroll know that I was on board for the trip. 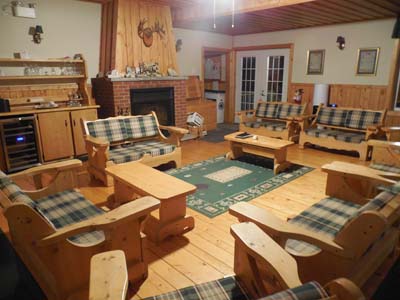 Anticosti Island is part of the Canadian province of Quebec and is located in the Gulf of St. Lawrence. The island measures 130 miles long by an average of 30 miles wide and boasts the densest whitetail deer population in all of North America. Hunters are allowed to take two deer of either sex. SEPAQ’s hunting area covers about 60 percent of the island and the terrain varies from dense spruce forests to clear cuts and even coastal flats where the deer often feed on marsh grass and kelp. SEPAQ’s elegant lodges are mainly located on the north shore of the island with gorgeous views of the ocean. Both American (meals included) and European (prepare your own meals) plans are offered. Travel to the island is by air and flights originate from Montreal, Quebec City, or Mont Joli on the Gaspe Peninsula. Our stay was to be at the McDonald Lodge.

I’d been to Anticosti Island once before in 2002 and had taken two deer on the last day of my hunt. That week had been a tough hunt and since the booking had been made late, I and my group had to stay in the hotel in town rather than in one of the remote lodges. This meant a lengthy vehicle ride every day to and from our hunting area. I’d learn that things had changed considerably since 2002.

One thing had not changed, that being the ups and downs of the weather in the Gulf of St. Lawrence. After driving to Quebec City, and just like during my 2002 trip, we were forced to spend an extra day on the mainland due to lack of suitable flight conditions. The unpredictable nature of weather is an unavoidable aspect of traveling to more remote locations. Carroll and I consoled ourselves with more fine mainland food and drink.

The next day promised better weather conditions and we made it to the island and were met by SEPAQ’s operations manager, Robin, as well as their head guide, Guy (pronounced “Gee”). We were also greeted by the local Chamber of Commerce, which consisted of about a dozen tame deer lolling around on the grounds of the restaurant. Their chairman was a handsome 12-point buck nicknamed Harvey. We hoped that Harvey was indicative of what awaited us at the lodge.

After lunch, getting our licenses, traveling to SEPAQ’s McDonald Lodge, and checking that our rifles were still zeroed in, we set out for a few hours of hunting. It was actually more of an armed reconnaissance. We didn’t see any deer, but had our appetites whetted for the next day’s hunt.

McDonald Lodge is simply spectacular. Located within a stones throw of the shore, the buildings were spotless and elegant inside and out. Everything inside was wood-paneled and richly appointed with comfortable sofas, chairs, and an operating fireplace. The bedrooms were double occupancy and quite spacious. The dining room was where the magic of their chef and lodge staff happened. Meals were some of, if not the best, I’ve ever had at a hunting lodge. We ate beef short ribs, filet mignon with shrimp, seafood linguini, and duck l’orange in a dining room that was the equivalent of that in any fine mainland restaurant. A second menu choice was always available for anyone preferring alternate fare. If you happened to be at the lodge at noon, you dined on a hot lunch. Otherwise, ample bag lunches were provided. Breakfasts consisted of anything you could think of and as much of it as you wanted. No one will lose weight on a hunting trip with SEPAQ Anticosti.

Day two, our first full day of hunting, consisted of a combination of road hunting from the truck, stand hunting from strategically placed ground and elevated blinds, and still hunting along trails and roads cut into the forest. We covered a lot of ground, but only saw some grouse, members of the local fox population, and fleeting glimpses of several deer as they disappeared from view. The windy weather wasn’t helping us. However, it didn’t seem to hurt the luck of two of our other lodgemates. One took a 195-pound (field-dressed) 11-point buck and another took a 173-pound 9-pointer.

While driving around in the truck on day two, I noticed an interesting aspect of SEPAQ Anticosti’s deer and terrain management practices. Large areas of land are fenced off with high wire fences. This limits deer access to these areas and ensures that the deer do not completely eat themselves out of house and home. The difference between the fenced and unfenced areas was rather dramatic.

On day three, our luck was more favorable. While I sat in a blind, Carroll took a doe, thereby ensuring meat for his freezer. Later in the day, I made a nice shot on a mature doe and guaranteed that I wouldn’t be going home empty handed either. After that, Carroll tagged out on a plump spike horn. Things were certainly looking up for us. The other hunters at the lodge managed to take a couple more animals as well. 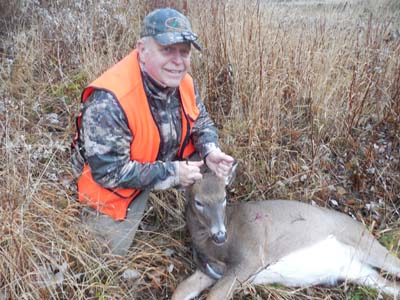 Day four, the final day, was make or break for me tagging out. As luck would have it, shortly after 8:30 a.m. a nice spike horn presented itself and dropped instantly at my shot. Game over. We loaded my buck into the truck and headed back to the lodge. The rest of the day was spent packing up, playing cribbage, enjoying a couple glasses of fine scotch, and combing the beach for treasures. Fossilized mollusks and a giant lobster claw were my particular discoveries. That evening, our last on the island, saw the other hunters at the lodge each fill their tags for a total of 12 deer for six hunters. Everyone was in high spirits.

Carroll and I didn’t bring home wall hangers, but we did fill our tags and our freezers. The other hunters at the lodge did the same with the added bonus of a couple respectable SEPAQ Anticosti trophies. I heartily recommend Anticosti Island for fine whitetail deer hunting, elegant lodging and dining, and all at a very reasonable cost. My adventure at SEPAQ Anticosti this year was unplanned. My next one won’t be and I won’t be waiting another 16 years for it to happen either.