Late September brought on all of the new wonderful opportunities for the fall hunting season in Wyoming. I had already spent 10 days in the Big Sandy Openings in northwest Wyoming enjoying the early fall weather and having a great time fishing for brookies and rainbows. Then that was wrapped up with several successful days of sage chicken hunting.

Back home in Northeast Wyoming it was approaching late September. A friend that had lived in Wyoming previously, Pete, was now coming from his new home in Michigan to hunt this area and stay at our home. Pete is just a young fellow in his mid-thirties, however, he was badly injured while serving in the air force during our recent combat efforts. He is one tough guy and pushes himself to hunt and fish but it is not easy like I and many others take for granted. He is a disabled vet but he makes no big deal about his condition and seldom complains though it is obvious that he is hurting at times.

Pete arrived and we began scouting the areas near home. He had a permit for any antelope and a general deer license. I went out with him several days later on his first hunt. He was looking for large critters. He passed up some real nice bucks, antelope and mule deer both, that I suggested he might later regret. But Pete was in no hurry and is evermore the optimist, not that I’m not but too many times I have passed up a good hunting situation only to never have it repeated.

The next day I was unable to go with him. He had been out all day when I received a call from him that evening just before dim light. He had shot a real nice buck antelope up a creek a good way from his vehicle and wondered if I could come out and help him drag it out. He was only a few miles out of town so I immediately went out to help him. 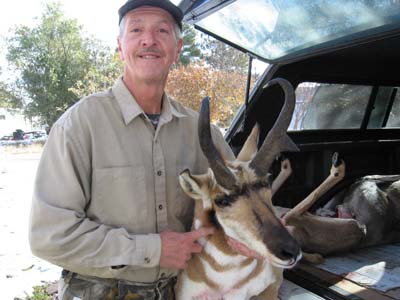 It was getting late. The weather was notably changing into much cooler, cloudy, and windy conditions compared to the pleasant fall days that had prevailed. Now I needed to get over a menacing barbed wire fence and up the creek to find and help my friend. I felt like it was a bad idea climbing up a wood post to top the fence and jump over it, but being in too much of a hurry, I did anyway.

I made to the top of the post and was teetering a bit as I prepared to jump clear of the wire and land. As I jumped, I went off balance and my right leg caught in the top wire. Instead of landing upright I hit on my right shoulder and back. Conscious and finally able to stand up, it was a long while before I could breathe. Eventually I decided I might live and began to make my way up to Pete his beautiful buck antelope.

I didn’t have to explain much, I must have looked like I was in a fight and lost. Anyway, we worked together and were able to get the animal out and to his vehicle.

Oh great, my antelope and deer season open in three days and I feel like I have been hit by a truck. Next day found me in the local hospital emergency room. A separated shoulder (my gun arm) and four broken ribs, not to mention all of the cuts from the barbed wire and bruises.

I couldn’t make opening day but I did finally manage to get out the last few days of the season which was two weeks long. The first day out I had no chance to get anything. Then we began to get a full-blown early winter storm. Lots of snow, cold, and wind. I made it out the second day but no opportunities again.

The third day was the final day of the season. The weather had climaxed to its worst the night before. That morning there was at least six inches of snow and the temperature was three above. So out I went. No one was available to go with me and I often hunt solo anyway, so Lord it’s me and you and that’s more than enough!

I had the hunting area virtually to myself and began seeing some pretty good buck antelope here and there and some smaller mule deer bucks. I kept moving on looking for just the right situation and critter. 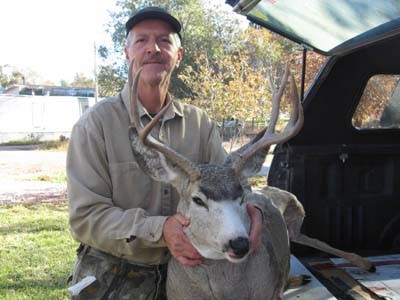 Two hours after daylight I spotted a nice 4x4 buck mule deer with a number of does. They were feeding and if I was careful there was brush in between the buck and myself. Just had to keep from scaring the does. I began slowly closing the distance in the fluffy, quiet snow until I was near 50 yards. Once the buck lifted his head, I had a real nice shot at the front of his neck. There was no hesitation. One shot from my Savage .243 and he dropped in his tracks. The does, not too startled to my surprise, just slowly milled away. It had now warmed to about 10 degrees and the sun was shining.

It was a bit more than painful to get the deer gutted and out to my vehicle. However, getting him loaded in the back of the pickup truck surely would have made an interesting video for someone to enjoy.

Once I had the deer loaded, a brief rest and a cup of coffee put me on my way to look more for a buck antelope. About an hour later I spotted a lone buck, a very nice specimen. Nice hooked thick horns. He was angling away from me at about 100 yards. What a beautiful sight. A nice lone buck antelope milling along in the fresh snow.

I quickly came to the conclusion this was the animal provided for me. Look no further. I got into a position to shoot while he crossed a shallow ravine in front of me. As soon as he had crossed the ravine and took a few steps on the opposite side I fired. The .243 did its job again, as did the 100 grain Federal ammo I was using today. He dropped dead in his tracks.

Once again, I had the fun of getting the buck out to my vehicle and loaded next to the buck deer. Once all of this was done and after a brief recovery, I began driving the short distance back home. As I went along, I encountered a real nice set up for a doe antelope. This was the final day to fill that license as well but I thought that I had my hands, and my truck, full enough. This was without question a double-blessing with the two bucks and plenty to be satisfied with on the final day of the season.