This story begins many years ago, when I read about a strange creature known locally throughout the southwestern United States and Mexico as the javelina, or Collared Peccary. As an avid hunter, I was fascinated by these small pig-like animals with sharp tusks and surly dispositions.

My sister recently moved to the artsy little town of Marfa, Texas. Knowing that the Marfa region of Texas is known for javelina hunting, I asked her if she knew any big game guides in the area. She gave me the phone number of a personal friend and guide who specializes in aoudad sheep hunting. The guide, known locally as Bubba, had access to several private ranches that were loaded with javelina.

A trip to visit my sister would now include a two-day hunt for javelina. I quickly thought of one of my sons, Dylan, who is also an enthusiastic hunter. He was excited to receive a guided hunt for a birthday present. 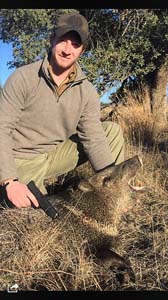 Dylan and I both liked the idea of a handgun hunt, since javelina can be successfully stalked if the wind is in your favor. He chose to bring a Glock 35 in 40 S&W. Dylan honed his handgun skills while serving as an Army Ranger, along with an occasional foray into competitive shooting.

For my part, I chose my familiar Smith and Wesson 686 revolver with a six-inch barrel. I carried this revolver for several years of my 31-year police career. My 140 grain Hornady XTP .357 handloads where grouping well at 50 yards, but I still wanted to hedge my bet. Not knowing what type of shot distances we would be faced with, I also brought a Winchester 94 in .30-30. A Leupold scope with 1-4x variable magnification and a Pig-Plex reticle seemed like the perfect match for this type of hunt.

When we met with Bubba, I was glad I brought the rifle. Bubba said the local aoudad population was out of control, and he needed to cull a couple of ewes from the herd. He asked if we would assist in this endeavor. It was hard to contain our joy at the prospect of adding another exotic animal to our hunt. Neither one of us had ever seen aoudad in the wild, and now we had the opportunity to hunt them.

Bubba assigned his assistant guide, a wirey young cowboy named Chet, to take us out the first morning. The ranch was a rugged place, with boulder strewn hills and deep ravines. Chet explained that the aoudad and javelina routinely travelled to and from surrounding ranches, so different animals could potentially be spotted each day. We later watched several aoudad jump over the cattle fences that separate the spacious ranches in the area. 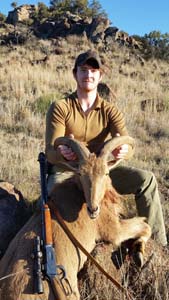 Late that morning, Chet spotted a distant aoudad at the top of one of the many hills on the ranch. We began a long stalk to the top of the hill, dodging cacti and using large boulders for cover. As we got closer to the herd, a wise old ewe sensed that something was wrong. She approached the edge of the mountain and stared directly down at us.

There was a tense moment while we froze in place. I slowly raised the rifle and positioned it across the top of a tall boulder. The 160 grain Hornady FTX bullet hit her right in front of the chest, effectively destroying her heart and lungs.

With one aoudad down, It was time for lunch. We met Bubba at a diner in town, where the decision was made to split into two teams for the afternoon hunt. Dylan went with Chet, while I went with Bubba.

Bubba, a fit 60 year-old with seemingly endless stories of hunting adventures, kept me entertained while we glassed for game. 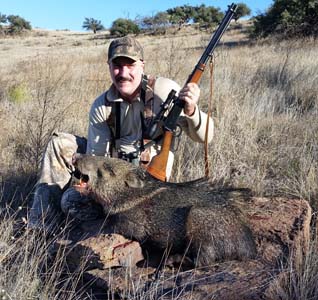 Later that afternoon, Chet spotted a single javelina trotting through the sagebrush. He rightly assumed there would be several animals in the group, so he drove to a chokepoint between two hills and instructed Dylan to get out on foot. Sure enough, the group of approximately 20 animals came towards him through the brush. When one of the animals stopped broadside at 30 yards, Dylan took aim with his Glock pistol and shot just over the top of its back. Pandemonium ensued, with animals running in various directions. He saw a larger specimen trotting 40 yards out, at which time he sent a 180 grain hollowpoint through both of its lungs. It was an exceptionally large male. Not bad for a first day!

The next morning found us on a stalk with Chet through another maze of boulders that looked like they belonged on Mars, rather than Earth. A herd of aoudad with several females was ahead, but the stalk was difficult due to the sheer amount of wildlife on the mountain. Flushing quail and spooked whitetail deer almost ruined our approach.

We finally got within .30-30 range of a young ewe. Dylan put the ewe down with a 130 yard shot after finding a suitable rest in the form of a tree branch.

By the time we got off the mountain, it was noon. Thus began the search for my javelina. I tried to sneak up on a small group in heavy cover, but they caught my wind and ran away before I could lay eyes on them. After several hours of fruitless searching, I wondered if that blown stalk had been my last chance at getting a shot. 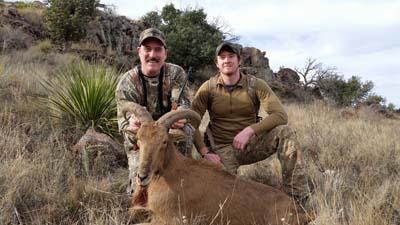 An hour before darkness, Chet was peering through binoculars at a distant hillside. He then said something that was music to my ears. He said, “That has to be a javelina.” He initially spotted a dark dot over 1,000 yards away. The dot was moving with stops and starts, like a lone javelina feeding.

We got into the truck in an attempt to close some of the distance. We stopped on a dirt track about 500 yards away before beginning the stalk on foot. It seemed to take forever as we made our way to high ground to see if the animal was still there. As we crawled over the top of a rise, I saw the javelina grazing undisturbed.

I considered trying to get closer for a shot with the handgun, but the cover was too sparse.

I took a sitting position with the rifle, trying to calm my nerves. The 80 yard shot took him low in the chest, and he was down for good. Just like Dylan’s animal, he was a large male with impressive chompers.

Dylan and I decided to ship the skulls of all four animals back to California, where I boiled them for European style mounts. The skulls of both species make great conversation pieces.

The trip to Texas will always live in our memory. Between visiting my sister, meeting friendly people, seeing the beautiful scenery, and hunting plentiful game, we had a great time.