Hunting chamois up above the clouds

The first rule of mountain hunting is - don’t give up your elevation. The second rule is you’re always going to give up elevation. The third rule? It’s gonna hurt.

When I heard about the new 22 Nosler, I was both surprised and pleased and, of course, I had to try it. The cartridge and its first rifle was introduced at SHOT 2017.

I needed to know – does the 22 Nosler come in a bolt-action? 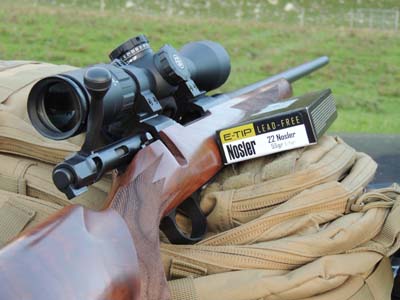 While the 22 Nosler was developed to run in an AR-style rifle, it has also been chambered in a bolt-action Nosler Model 48.

“We have one for you, Gary,” Mason said when I put the question to him. Mason Payer is one of my longtime friends and also a longtime employee at Nosler. A certain bolt action in a Model 48 was on loan to another writer and when it showed up at the plant, Mason rung me up.
“What do you think,” I asked, “should I take it to New Zealand?”

We were shooting two episodes of Frontier Unlimited on the South Island, one for chamois and one for deer. That’s what I thought. I didn’t count on hunting scrub bulls, wild cattle, way up in a national park. Remember those scenes from Isengard in the Lord of the Rings? Yes. There.

The loan of a Model 48 is not taken lightly. Nineteen-forty-eight was the year John Nosler brought the Nosler Partition to market, the year that changed everything in bullet design, in how we hunt big game. I knew John Nosler and when I hold one of these rifles, I think of my friend and I know his memory goes with me into the mountains.

Next question? What bullet?

I tend to subscribe to the heavier bullet approach. So, I confess to a little trepidation when Mason said he’d send me with the 55-grain E-Tips. Fifty-five grains! That sounded like a bullet for a rockchuck, a bullet for a coyote. Okay, though, I know the E-Tip and I know what I must do. With this small caliber, I’ll keep shots under 300 yards. Put the crosshair on bone.

These rifles are stocked with some of the finest wood going on rifles these days. And I’d have to take care of it. For that reason, I carried a Grays Harbor Unders gun sleeve with me to protect the wood stock as it slid in and out of the helicopter and in and out of the truck on hunts for stag and fallow deer.

But let’s start, where I started. With a bare rifle.

I had to go to Portland, so I took the rifle in to the offices of Warne Scope Mounts (Tualatin, Oregon) to get fitted with scope mounts. Since I had a scope with me, Randy Parks and I fitted the Sig Sauer Whiskey5.

At The Range and In The Air
A few days before my trip to New Zealand, I spent an hour at the Central Oregon Shooting Sports Association Park east of my home town of Bend. It was a calm day and I had 20 rounds allocated to the project.

Bore-sighted already, I skipped that step and moved to the paper. With the 55-grain E-Tip, I zeroed the rifle (100 yards) with 10 rounds and then proceeded to shoot three-shot groups until the box was empty. My best three shots measured in a one-inch group.

A few days later I climbed on an airplane.

In Auckland, I had a brief visit with the police at the airport where they issued me a license. The only difficulty I had along the way was carrying my rifle case and luggage through a narrow hallway to our rented flat in downtown Auckland. They’re going to have to repaint that hallway.

After a night in Auckland, we boarded another plane for Queenstown. A stewardess stopped me getting on the airplane and thanked me for coming to her land.

“Ah. Welcome, honored hunter, to our country,” she said. In four trips to New Zealand, that has always been the attitude. “Thank you for coming.” “Shoot some rabbits for us.” “Shoot a few feral cats.”

There are no predators in New Zealand, so it is completely up to humans to keep animal numbers in check. I am happy to be part of the solution.

The Gates of Haast
For the first few days, I kept the Model 48 in a case, but then we had a chance to hunt scrub bulls in the rainforest. And we’d go by helicopter. 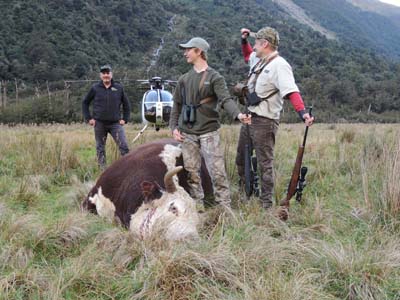 Way up in the National Park, a few small herds of wild cattle have established a foothold. The only way to get to them is with a helicopter or a multi-day horseback ride.

These are wild cattle, several generations removed from the first beeves that escaped the fall muster. They are the closest thing to dangerous game in New Zealand. The current estimate is there are 80 head in this part of the Mount Aspiring National Park.

Want a mental image? Think Isengard in the Lord of the Rings trilogy. Then think huge Herefords that tip the scales at over 2,000 pounds. Don’t laugh. These are wild animals with herds to defend and they are adept at taking to the bush when they hear helicopters or men on horses. And like some of our more famous wild bovines, they have the equipment to stomp you into next Sunday.

What happened was nothing shy of a Kiwi Rodeo. We were flat on a gravel bar on a river bank and the cattle were across the water. We wanted a shot at a bull, not a cow. To get us the shots we wanted, the pilots tried to herd them toward us. It was the most incredible display of helicopter flying I have ever witnessed. And then a bull separated from the herd and faced us head-on across the river. One hundred yards.

Fifteen-year-old Chisel, shooting a .257 Weatherby with 110-grain AccuBonds, was the primary and I was the backup. Pretty light bullets for this kind of work. I held the crosshair on the bull’s forehead, ready for the shot, but then the bull turned, still quartering to us.

At Chisel’s shot, the bull hunched up and lunged forward. It would not take one more step. My crosshair was high in the lungs when I broke the trigger, the impact of the E-Tip a split second behind the fatal AccuBond. Chisel couldn’t have made a better shot.

We collected one more bull, this one for 13-year-old Finney, also shooting a .257 Weatherby in a Blaser RS. We harvested meat, skins and heads, then loaded back up in the choppers and punched downriver into the dusk. 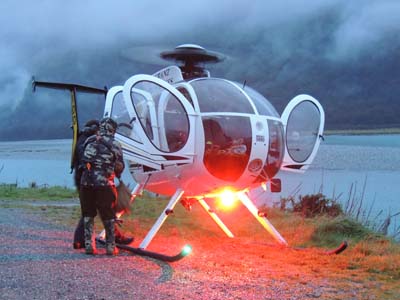 Starting at the river’s edge, this helicopter hunt was cut short, as many are, by a swiftly moving storm from off the ocean.

Chamois Shape
For the last two years, I have tried to stay in shape for the chamois hunt I knew was coming. On the cover of my gym journals, I paste the picture of a chamois and at the end of every workout, I tell myself that the last 40 minutes are keeping me in chamois shape.

We would go in by helicopter, get dropped on a mountain top and do our best till weather or night chased us out. The West Coast of New Zealand sees as much as 30 feet of rain each year, so the next bank of clouds is never far away.

The pilot left us on the knife edge of a long ridge. When the little bird was a speck in the distance, we set up the glass and began to look. Because a chamois is spotted doesn’t guarantee a stalk. We looked at two decent bucks and lost them to the other side of the hill. We stalked a big one at the shoulder of the ridge, closing the gap from 700 yards down to 70 and then bumped it before we could get into position. 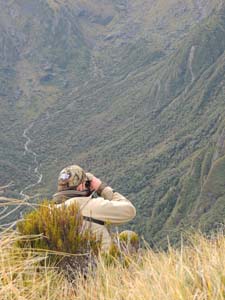 Pog Cameron, of Pure New Zealand Hunting, glasses for chamois from the top of one mountain to another.

My guides were Pog Cameron and his brother, Daniel. Daniel that spotted the next shooter buck. It was bedded on a little finger ridge and when we belly-crawled to the edge of the cliff to look down, he had spotted us.

Which brings us to the fourth rule of mountain hunting. They see you before you see them.

I had the leisure though, to look him over with the spotting scope, get the range and make a good shot. I skinned down on my back, turned over and snugged the rifle into my shoulder. 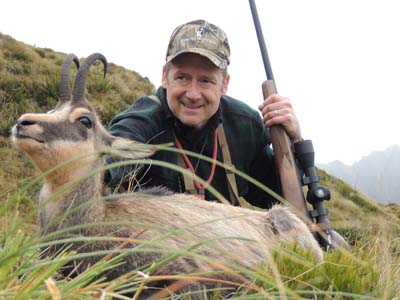 An agile goat-antelope, chamois are found in the mountains of Europe from Spain to Austria and the Caucasus. Brought to New Zealand in the early 1900s, they are hunted in the highest tops of the mountains.

One-hundred-forty yards. The bullet punched in high on the right shoulder and broke the left front shoulder. In the scope I saw the buck rear up on its back legs and I had another one in the pipe already, so I punched it again with an insurance shot, watching it tumble down the ridge and out of sight.

Chamois live at the very tops of the steepest, least accessible mountains. We had to lose elevation to retrieve the animal and then climb back up to a spot where the helicopter could pick us up. Down and up. Down and up. And up. It hurt. But it was a good hurt.