Central Oregonians in Central Florida on a hunt for the Real Florida.

Have you been to Disney?”

On the last leg, from Salt Lake to Orlando, I sat next to a 70-year-old attorney from central Florida. I wanted to catch a glimpse of authentic Florida. I asked what he thought a visitor to Florida should see, grasp and take away.

He thought for a minute then asked if I had been to Disneyworld.

We stayed at the Driftwood Resort in Vero Beach, a delightful place and toured the Navy UDT-SEAL Museum in Fort Pierce. When our friends from central Oregon, Mathew McFarland and his wife, Tasha and their kids arrived, we checked into the Vero Beach Hotel.

A McFarland rite of passage is an alligator hunt when each kid turns eight. This was Katie’s trip, but the two older kids would hunt too, as well as my daughter, Mikayla, 18. 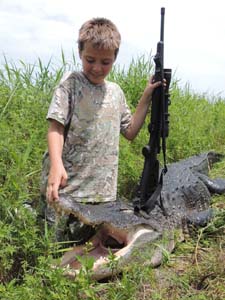 Ten-year-old, Finney McFarland, bagged this gator with his cut-down Remington, chambered in 300 Blackout.

In a six-hour hunt, ten-year-old Finney shot his alligator with a cut-down Remington 700 chambered in 300 Blackout and Chisel, 13, bagged his with a bolt-action Remington in 308. Both gators stretched over ten feet.

Grayson Padrick, owner of Central Florida Trophy Hunts, is a former NASA manager turned alligator hunter. We met again at a truck stop that evening. This time he had his airboat in tow.

In central Florida, the water table is just a couple of shovel blades down and when a farmer plows, the water must be pumped out of the furrows and into canals and lakes. This makes for a lot of places for alligators to live.

We drove a few miles south of Fellsmere and passed through a gate to park at the edge of a lake.

This airboat was no smaller than a jet boat, the type we fish from on our rivers at home, but much of the stern was occupied with engine. The structure puts the motor well above the rest of the boat, which allows the big carbon fiber prop to push the humid Florida air. Padrick parked on land, fired up the giant weedeater – and drove it off the trailer onto dry land, then over the weeds and into the water.

Mikayla and I climbed into high seats in the stern, Padrick perched in front of us and Matt and eight-year-old Katie stood in the bow. With no illumination on the boat, Grayson steered by the light of his headlamp.

Padrick wanted six gators tonight. There were too many in this 1,700-acre lake. When the beam from Padrick’s lamp played across the water, orange eyes blinked back from shorelines and patches of hyacinth.

Katie’s crossbow was a Barnett, with a rail-mounted green Crimson Trace laser and a reel, line and buoy. We stalked a gator that held in the light and when we got close, Katie shouldered the crossbow and trained the laser.

At her shot, the bolt, with a line attached, narrowly missed the gator, which gave a shove with its tail and vanished beneath the hyacinths.

Padrick drove on, standing on a platform, leaned against a seat with his left hand on the rudder and, in his right, a harpoon with a barbed head, attached to a line and buoy.

After several misses, we were up on plane, blasting along in the airboat when Padrick spied an eight-foot gator in the brown water. At full speed, he lined up the boat and when we were alongside, he raised the harpoon and threw it. Threw it like a Viking in a sea battle, like a mounted Shoshone in a buffalo chase, like a Makah would harpoon a whale. In a moment, the beast was hit, the buoy was out of the boat and Padrick wheeled us around and we charged back. 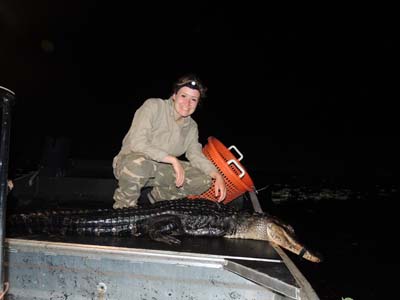 Mikayla Lewis poses with a 7-footer, taken on an airboat hunt for nuisance alligators in a swamp near Vero Beach, Florida.

There are a variety of methods that trappers use to subdue nuisance gators and we, in 16 hours of gator hunting, got to see a lot.

Padrick loaded the bangstick with a 44-caliber bullet and when Matthew had the gator at the boat, Katie shot it in the head. Game over.

On the next try, Katie held the green dot low on the gator and the bolt stuck. After a tussle, Padrick and McFarland hauled it aboard. Then it was Mikayla’s turn.

Padrick fired the motor and we flew across the lake to where a dozen pairs of orange eyes stared back. Padrick killed the motor, cut the light and we drifted in. Gators splashed and vanished or held and glared. We lined up on one, the harpoon was thrown and the battle joined. At the end of it, Mikayla shot her gator in the back of the head with the bangstick and we hauled the seven-footer aboard.

We spent 11 hours in one day and night to bag and tag five alligators. All, without a single Disney princess sighting.

Future World
One evening later, we packed our rifles and headed back to the marsh. I checked the map and found a more direct route than the one the GPS unit recommended. Armed with my inside knowledge of Florida’s freeways, Mikayla and I started for our rendezvous with Padrick and the McFarland boys. We planned to hunt cattle country, where wild pig numbers needed thinning.

I started onto a toll road and after a few miles, fed $1.75 in quarters into a machine. A few miles later, I fed my last two quarters into another toll booth. They don’t employ toll booth operators in Florida anymore. Robots get the job done, but toll-bots don’t make change. I was out of quarters!

We blew through the next toll booth, starting the sirens and lights a-flashing and then blew through another and another. After three blown toll booths, I expected to see a whole squad of Florida troopers in my rearview or a roadblock ahead, but for all the alarms and sirens, nothing happened. Talk about Future World. Next time, I bring two rolls of quarters. 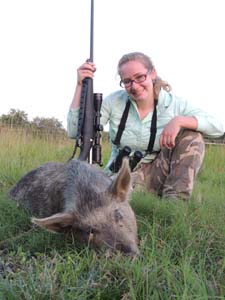 Mikayla Lewis used her favorite blacktail deer rifle to take this, her first feral hog. A dry sow, it was one of the best animals she could have shot, both for the abundance of meat, its flavor and quality.

Swamp Buggy Wild Boar Adventure Land
Padrick was waiting with his swamp buggy when we arrived. Powered by a well-muffled 350 Chevrolet with Cadillac steering, its floorboards are almost seven feet off the ground and it seats five. A landing, halfway to the deck allows for stowage of coolers and game. This machine is built for crossing shallow lakes and soggy pastures, and can even drive over barbed wire fences when the posts are laid down.

We drove through cow pastures, around spiky vegetation, stands of trees and over a fence or two. Padrick dropped Mikayla and me at a tree stand and took the McFarlands to their stand.

The sun marched toward the skyline, shadows lengthened. I held my hand at arm’s length. Two fingers above the tops of the trees. Twenty minutes left.

Nasty biting ants. They’d bitten me 40 times, but had not bothered Mikayla.

In the ladder stand we were six feet off the ground and the wind was at our backs. There is always a chance a hog will show up, one that has lost its sense of smell. I didn’t hold out a lot of hope we’d see pigs. Bad luck.

Swamp smells, bird calls and insect chirps filled the late afternoon; all of it foreign to our Pacific Northwest perspective, except the waiting.

We expected the hogs, if any, to emerge from the jungle to our right, but then, when the pasture was in full shadow, a long line of pigs emerged on our left, from the only area they might have not winded us.

A steady breeze had deposited our scent spores on grass blades for the last three hours and when the smaller pigs hit it, they hesitated, then charged ahead. At the back of the line came two larger sows. 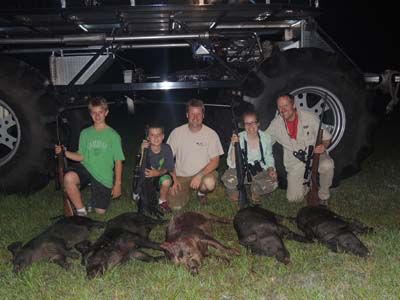 Mikayla whispered, “Ready,” flicked the safety to ‘fire’ and squeezed. After the shot, she slammed another Ballistic Tip into the chamber of her Ruger American. When the other pigs cleared out, we climbed down from the stand and walked over to get a look at her first feral hog.

We finished with five hogs, the last two fell to 150-grain AccuBonds from my bolt-action Montana Rifle. We shipped home pork loin, chops and links and a few boxes of alligator meat from our adventure land.

We also went to Disneyworld.