You think a bear loses weight fast in its winter den? Try putting it on a scale!

Story and Photos By Gary Lewis

It was September, in Minnesota, and the season was open. Brian Bachman outfits bear hunts on public lands in the Superior National Forest. When a group of public land hunters brought a bear into the local sporting goods store, the owner suggested they call Bachman and see if he would weigh the bruin.

“Are you sure you want me to weigh it?” Brian asked. “Right now your bear weighs 500 pounds. After we put it on the scale, it won’t weigh 500 pounds ever again.”

A bear on the ground. This is where the guessing usually starts. Bears typically weigh more, the further they are from a scale.

Notice how by introducing the scale to the discussion, the bear immediately lost 100 pounds?

“Are you sure you want me to weigh it?” Bachman asked again. The truck was backed up to the scale.

It was a big bear, and it had been gutted. When the bear hung from the scale, the digital readout told the truth. Two-hundred-eighty pounds. Bachman guessed the live weight was somewhere around 320.

It was a good bear for sure. Better than good. It was that most rare of animals. It was an honest bear.

Bears are notoriously difficult to judge in the field, but hunters are quick to guess their weight. That’s before the scale is employed. This boar weighed in at 204 pounds.

Bachman weighs every bear his hunters take because the Department of Natural Resources requires him to keep records.

When I was in camp last September, 16 hunters tagged 14 bears. Every one went on the scale.

One of the reasons it’s so hard to guess a bear’s weight is that every bear is different. They have different musculature, different amounts of fat, and bears, from region to region, have different hair length, which also varies season to season.

“Some are long and skinny, some are short and fat,” Bachman says. The same could be said of bear hunters.

One of the guides in camp was Ron Radika, an honest man. Radika has been guiding bear hunters in Minnesota for four years and he has looked at as many as 25 bears on the ground each season. After all his experience, Ron Radika said he is still “the world’s worst guesser.” He gave some examples of how wrong he has been.

“It’s just hard to know how big they are.” Radika tries to guess on the low side, but it doesn’t always go that way. Once he told a hunter he had the biggest bear in camp.

Another time he told a hunter his bear was 90 pounds and it turned out to weigh 206 pounds. 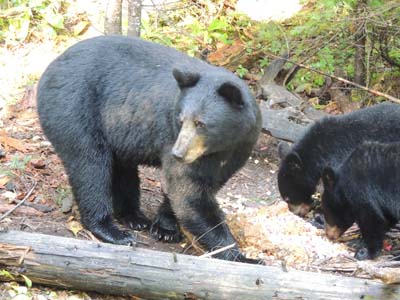 The best way to field-judge a bear is when two or more are close together. In a lot of cases, that’s going to be a sow and cubs. In the spring, two bears together could be a male and female. Note how this sow is looking around for danger in between mouthfuls.

Black Bear by the Numbers
In general, bears get bigger through the course of their lives. A newborn black bear weighs about eight ounces. A year later, that cub is somewhere between 30 and 70 pounds. A young male, 1-1/2 years old by autumn is likely to weigh between 100 and 120 pounds, while a 2-1/2 year-old will tip the scales at 150 to 170 pounds. After that, it comes down to genetics and food sources.

In northern climes, black bears may not grow as fast as they do in warmer temperatures. It’s a factor of growing seasons. 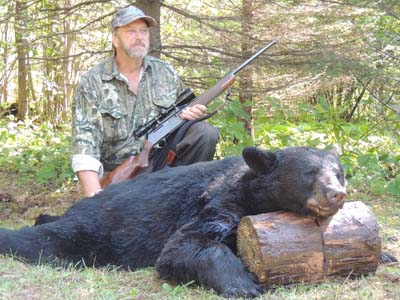 South Carolina hunter Tony Collins took the biggest bear among 14 hunters in camp. This big, old bruin weighed in at an honest 323 pounds. If the berry crop hadn’t failed, this bear would have weighed close to 400 pounds.

In general, east coast bears are larger than they are on the rest of the continent, but there are exceptions in areas with good food sources and longer growing seasons. A 10-year-old North Carolina male had a recorded weight of 880 pounds. A boar was killed by a car in Winnipeg, Manitoba; its weight was recorded at 856 pounds. In most places black bears are found, males average between 200 and 280 pounds. A large bear might lose up to 20 percent of its weight over the winter denning period and can lose weight again during the spring breeding season.

It is rare for a sow to attain a weight of much beyond 200, although black bear sows have been known to reach 300 pounds. On our hunt we weighed one sow at 238.

In general, we expect bears to continue to get bigger as they get older, but that isn’t always the case. A sow might not get much bigger than 150 to 160 pounds.

They’re Always Bigger in the Rifle Scope
On the second day of my Minnesota hunt, I saw a bear walk in on the trail to my right. From my perch ten feet up, I evaluated.

“That’s a small bear,” I told myself. Then its twin showed up. I saw momma back in the brush, her nose up, testing the air. She looked big in comparison to her cubs, and I suppose she was, but probably no bigger than 170 pounds.

When they spooked after 15 minutes of feeding, I knew a boar was nearby. When I saw him, I estimated his weight at 400 pounds. One-hundred-twenty seconds later, I shot him. He came to rest against a tree. 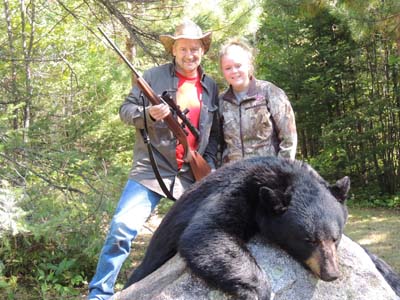 As my heart rate declined, I revised my estimate down to 300 pounds. When I walked up to my bear, I ran a tape from his nose to the tip of his tail. He was five feet, six inches long. I revised my guesstimated weight down to 279 pounds. Still a good bear, I told myself, although the “ground shrinkage” had dropped it 121 pounds. And all that before it was weighed.

Back at camp, the other hunters, jaded by their experiences with the scale, guessed at the weight. The estimates came in anywhere from 190 pounds to 280 pounds. When the scale stopped bouncing, we read the real weight at 224.

That same bear, in the spring probably weighed less than 200 coming out of the den. In a different year, with more berries and more natural food in the forest, he might have weighed 250 pounds in September. The real weight of a bear is maybe not as good a talking point as its length. 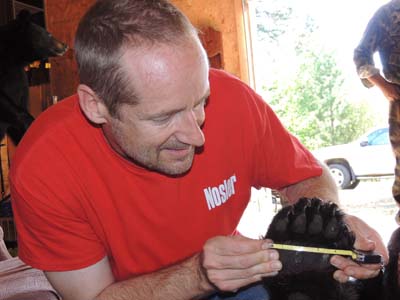 A good way to tell the size of a bear from its tracks is to measure across the front pads. Lewis carries a tape measure to check tracks at baits and water holes. A front foot pad that measures five inches across is an indicator of a bear that probably would tape six feet from nose to tail.

In camp we had a taxidermist, Dave Ringstrom. He skinned out all 14 bears and had a smile on his face the whole time. We talked about how hunters never really know how big bears are.

Ringstrom looks at a lot of bears and rather than rely on the weight of animal, or the supposed weight when ordering taxidermy forms, he likes to whip out a tape measure.

“I tape it from nose to tail, that tells me how big it is.” After that he’ll measure the girth.

Ringstrom said a guy will tell his taxidermist how big his bear is, and the taxidermist will write that down and bill the fellow for the size of the grossly inflated bear.

If you don’t weigh it, you can still say your bear is a 400-pounder. And maybe you’re right. Just don’t brag to the taxidermist. Exaggerating can get expensive.